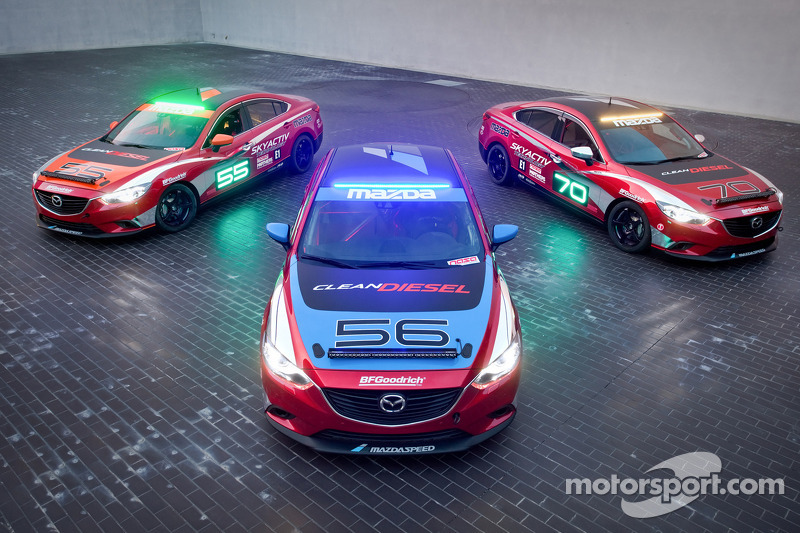 Sixty-three cars are scheduled to take the green flag for 25 hours of racing.

NAPA VALLEY, Calif. (Dec. 4, 2013) -The 2013 United States Air Force (USAF) 25 Hours of Thunderhill race will feature a great cross-section of cars including the MAZDASPEED Diesels, Audi TT RS as well as the Davidson Racing Eagle. Sixty-three cars are scheduled to take the green flag for 25 hours of racing on Sat., Dec. 7 at 11 a.m.

"Mazda is a small company, but what has always stood us apart from our competition is that we are a car company full of real car people," said Robert Davis, MNAO Senior Vice President, US Operations. "Given that we have less than 600 employees and about the same number of dealers around the country, we have a disproportionately large number of employees and dealers who have competition licenses and are real racers. These people spend their weekdays working with cars professionally, just to spend the weekend working with cars as their hobby. To finally put to bed the age-old question of who's faster, dealers or factory guys, it's finally time to cut the conversation and put everyone's talent where their mouth is."

With entries from New Zealand and Japan, Germany's Rotek Racing's Audi TT RS adds to an impressive list of international entries for the USAF 25 Hours of Thunderhill. The Audi is one of the cars that is attracting a great deal of attention, both for its European roots and its driver line-up. The team is based in Meuspath, Germany. The car is an Audi Sport Customer Racing factory built Audi TT RS VLN SP4T that has been running in the German VLN Endurance Championship this year. It will be going for both the class victory in ES and for the overall victory at Thunderhill. Driving the No. 24 Audi will be Kevin Gleason, Rob Huff, Robb Holland and Jeff Altenburg.

"I believe this is the only Audi TT RS to leave and race outside of Germany," Gleason said. "The car is really advanced, with traction control, ABS [anti-lock braking system] and lots of carbon fiber aero bits, so I'm sure it will be a blast to drive. Being in the faster category, it will be important to manage traffic well, as there are so many cars with so many speed differentials. We will also need to be quick, consistent and stay out of the pits. From what I understand, the Audi gets great gas mileage. It is a little bit down on pace from some of the Porsche 911s and Audi R8s, but we will look to our driver strength and fuel mileage to offset the speed differential."

Also in the ultra-competitive ES Class will be the No. 16 Davidson Racing Eagle. The Eagle will be driven by seasoned pros Burt Frisselle, Anthony Lazzaro, Brandon Kraus and Mark Wilkins.

"The Eagle has undergone a number of significant changes to improve drivability, reliability and ultimate performance," Wilkins said. "Some of the big changes include moving the driver to the center of the car, larger brakes and some reengineered suspension geometry. The car has really been completely transformed to address some of the weak areas we identified last year. In pre-race testing the car has proven to be much quicker while being easier to both set-up and drive. We ran the car in a few pre-race tests to iron out the significant changes that had been made since last year's race. Specifically, we ran the car at Miller Motorsports Park in September and at Thunderhill in October to get it all set up for the 25. The Davidson Racing crew has been working around the clock to get the Eagle ready and I feel we will be in a good position for this year's race. Our goal is to win. We were very close last year and we have certainly improved the car substantially since then. It will be a very tough race with lots of good competition and plenty of cars on track. We will have to be very smart in traffic, manage the car and not make any mistakes."

"With the green flag just days away the excitement among the competitors is growing for the eleventh running of the USAF 25 Hours of Thunderhill," Jerry Kunzman, NASA Executive Director, said. "The ES Class is looking to be the strongest that we have seen in the history of the race. There is also going to be a great race among the cars in the E3 class where we have a group from Acura and Mazda at opposite ends of the pit lane going for that class win. We also have a great line-up of two and three car teams as well as our usual single car efforts. The variety of cars, and a truck, has been a hallmark of this event over the years. I don't think we are going to see the double digit lap victory for the overall win like we have seen in the past."