6th and 16th are the starting places for Marc VDS BMWs

Nürburgring, Germany - 21 September 2013: The Marc VDS Racing Team will start the title deciding Blancpain 1000 in sixth and 16th after a tight qualifying session at the Nürburgring. With traffic causing issues for all the drivers, the #3 BMW Z4 GT3 starts from the third row with a 1:55.580 set by Yelmer Buurman. #4 saw Nick Catsburg produce a 1:56.072 for 16th.

With the track dry throughout the day and temperatures surprisingly high for September in the Eifel, Saturday was a good opportunity to prepare for Sunday's race. Every session saw a busy, dry track, conditions the team can expect to face throughout the six hour enduro. 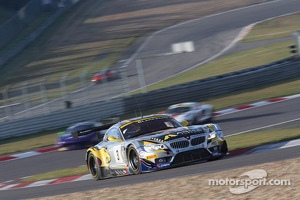 Qualifying was extremely difficult, as drivers desperate to set lap times balked faster cars and left the Marc VDS drivers frustrated. Maxime Martin, sharing #3 with Bas Leinders and Yelmer Buurman, was left to rue a missed opportunity as he was repeatedly blocked by slower cars in Q3, leaving Buuman's Q2 time as the fastest for the car. Catsburg, in the car he drives with Henri Moser and Markus Palttala, was able to improve #4's position in Q3 after finding a modicum of space.

The race, set to run for 1000km or six hours, will be a test of strategic knowledge, fuel conservation and consistency, as well as the usual frantic racing action. With both the teams' and drivers' titles in the Blancpain Endurance Series up for grabs, it will be a fast paced contest.

Sebastien Metz, Techincal Director
"At the end of the day, qualifying is always a question of luck in this series. There are some crazy drivers in this field, which can make it a little difficult. Both cars finish the session without damage, and that's an achievement in itself! Performance-wise, the car is in a difficult position with the BoP. It's a long race though and we have strong, consistent drivers. It's a question of strategy: we have to manage this as best we can, to move up the timesheets. We've been working hard on that side of things and it will be fascinating to see how it works out."

Nick Catsburg, #4 BMW Z4 GT3
"To be honest, I think we could have done better. On the first run, an Audi spun and cost me a lot of time on my peak lap. The next lap, it was my own mistake and after two laps the peak is gone. So I opted to take a second set of new tyres and on the second set, it was OK. The car was good, never a perfect lap, but there's only a couple of tenths more I could've found. We need to find some time. We have work to do tomorrow but I think we have the pace with the three of us to get a good result tomorrow."

Yelmer Buurman, #3 BMW Z4 GT3
"I hadn't used the new tyres in pre qualifying, and so when I took them for the qualifying the difference was incredible. I had so much grip! It feels pretty great actually. There's a little struggle on the old tyres, but of course the old tyres will not feel as good. I don't know how the other teams are doing, but we have a good overall pace, especially with the used tyres. We didn't expect to be fighting for pole position, but we can be happy with a top six. It will be about consistent running tomorrow, and I think we can produce that."

Champions! Nissan does the double at the Nurburgring