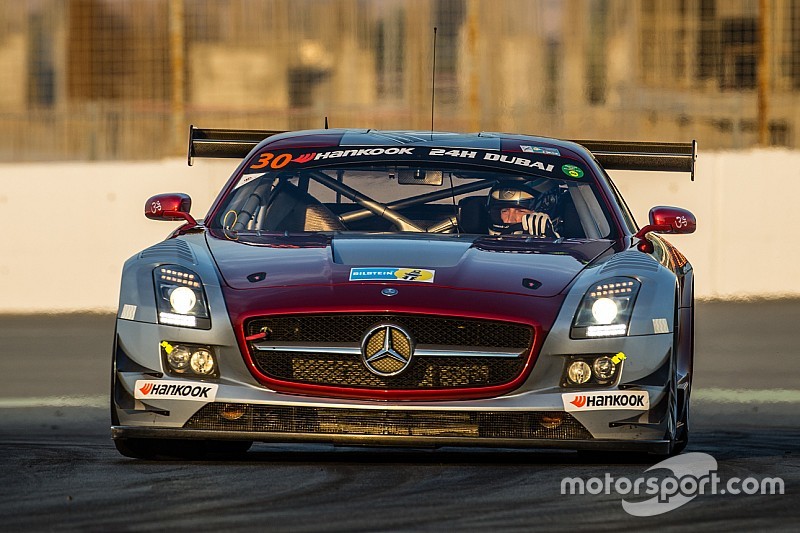 Le Castellet – With a lap time of 2:06.390, German driver Thomas Jäger put the #30 Ram Racing Mercedes-Benz SLS AMG onto the pole position for the Hankook 24H Circuit Paul Ricard. Second place went to Matteo Malucelli, 1.003 seconds from the pole-winning time. Malucelli’s #4 Scuderia Praha Ferrari 458 Italia GT3 will also start on the front row. The second row of the grid has the #33 SPS Automotive Performance Mercedes SLS AMG of Lance David Arnold ahead of the similar car of HP Racing, with Jeroen Bleekemolen setting the fast time in the #2 Mercedes.

A6, the top class for the race

Jäger’s time came near the end of the session after Malucelli had already pitted. Bleekemolen tried some late session heroics and improved his team’s time considerably but it was not enough to move to the front row. Nicolas Armindo with #7 HB Racing Team Herberth Porsche 997 GT3 R was the early leader and was also fastest in the Free Practice session but dropped to fourth as qualifying wore on. There was a margin of less than two seconds covering the top five cars in the top class for the race, A6.

Dimitri Enjalbert’s time of 2:11.660 was enough to place the 997 class championship leading #17 Ruffier Racing team into top spot in the all-Porsche category. The time held up despite a furious assault by multiple GT champion Emmanuel Collard. He moved up the order throughout the session in the #55 Crubile Sport entry. Luca Rettenbacher, a star driver at the Zandoort 12H, will start third in the 997 class with the #51 MSG Motorsport car.

Olivier Gomez recorded a late surge and put the #150 GC Automobile GC 10 onto the SP2 class pole with a 2:17.537. Alban Varutti was the early leader in the class but his similar GC, entered by Team Alten, stopped with some wheel problems and was unable to challenge Gomez. Zdeno Mikulasko in the #66 ARC Bratislava Porsche 997 Cup S was third in SP2.

A separate qualifying session was held for all the other classes. There were stirring battles in each class with frequent changes in positions. Torsten Kratz in the #161 Securtal Sorg Rennsport BMW E92 M3 ended quickest in in SP3 with a 2:20.823 at the very end of the session. Fredrik Blomstedt had to settle for second in class although he held the lead for a long time with his #206 Nova Race Ginetta G50. Sebastien Dussoillet’s time of 2:21.020 early during the session was good enough to place the #100 Seat Leon Cup Racer of local French favourites, Motorsport Development, onto the A3T class pole. A late charge by the #95 Memac Ogilvy Duel Racing Seat Leon Cup Racer was not quite enough to usurp Dussoillet’s spot.

Bernd Küpper’s 2:25.429 in the #75 Hofor-Küpperracing BMW E46 M3 was set early in the session and was never challenged as the best time in A5. Maciej Dreszer’s 2:31.948 with the #70 Mission Possible entry was plenty for top spot in the all BMW M235i Racing CUP1 class. Martin Byford with the #76 Synchro Motorsport Honda Civic Type-R and Mads Christensen in the #126 Team Sally Racing Renault Clio Cup III had an exciting late session fight for best in A2 with the English Honda ending quickest at 1:34.090.

It looks to be a very competitive race up and down the field. The gap between the top qualifiers in each class was never more than about 1.2 seconds.