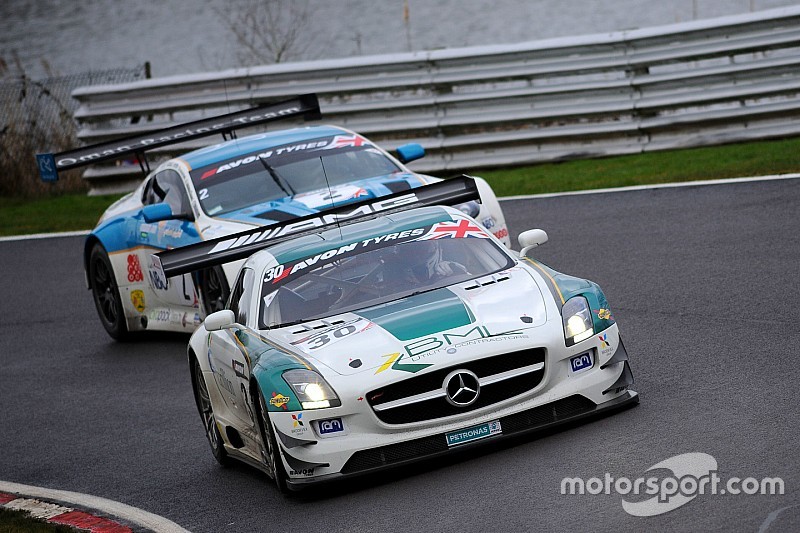 Hot and sunny skies greeted the 57 car starting field as they began the first 24-hour race.

Le Castellet – The #30 Ram Racing Mercedes-Benz SLS AMG leads the Hankook 24H Circuit Paul Ricard after three hours, or 1/8 distance. Thomas Jäger started the A6 class car from pole position and the team has only relinquished the lead during the pit stop cycles.

Hot and sunny skies greeted the 57 car starting field as they began the first 24-hour race to be held at this famous circuit in the glorious south of France. While Jäger started cleanly, there was chaos behind him at the very first turn of lap one. Jeroen Bleekemolen in the #2 HP Racing Mercedes tapped the #4 Scuderia Praha Ferrari of Peter Kox. The Mercedes suffered a puncture and came back to the pits, having to then make a subsequent call for more repairs. The Ferrari was more heavily damaged and required a tow to its garage in order to fix the badly damaged rear suspension.

The loss of many laps for these contenders allowed the #33 SPS Automotive Performance Mercedes of Lance David Arnold and the #7 Herberth Motorsport Porsche of Nicolas Armindo to chase Jäger. Arnold was the first of the leaders to stop and he was caught in a queue at the common fueling depot. The #16 Simpson Motorsport Audi R8 LMS and the #10 Hofor Racing Mercedes were beneficiaries of the delay for the SPS team. Christer Jöns in the Audi and then Christiaan Frankenhout in the Hofor Mercedes took turns in the lead before making their respective halts.

Tom Onslow-Cole and then Adam Christodoulou took turns in the leading Ram Racing Mercedes. Kenneth Heyer, aboard the #10 Hofor Racing Mercedes, briefly moved back to the front during another pit stop exchange. Meanwhile the good run of the SPS team ended with a badly damaged front left wheel while the Hofor team later ran out of fuel. The #7 Herberth Motorsport Porsche was playing a waiting game with a strong hold on third place overall which became second when the #10 Mercedes stopped..

A great start by Emmanuel Collard put the #55 Crubile Sport Porsche into the lead of the 997 class, which was tightly contested by the #17 Ruffier Racing and #52 MSG Motorsport entries. Felix Wimmer, in the MSG Porsche was later able to capture the class lead, only to suffer suspension damage.

The two GC Silhouette cars swapped the SP2 class lead several times during the opening hours, with Eric Gaillard in #164 holding a slim edge over Tom Soubiron in the #150 GC as the race passed the three hour mark. Two of the MARC Cars Australia entries, number 93 and 91, made stong comebacks in the SP2 class after enduring a difficult start.

The A3T class was dominated early on by Sebastien Dussoillet in the #100 Motorsport Development Seat Racer. However, a strong charge by the #208 Team Altran Peugeot moved them to the front of the turbocharged touring car category.

The #160 Cor Euser Racing Lotus Evora have provided one of the Cinderella stories of the race. After missing qualifying and starting from the rear of the grid they have moved into a commanding lead in SP3. Similarly, Marlene Broggi was a star performer, bringing the Boutsen Ginion Maserati Granturismo from the back of the grid to the middle of the pack within a few laps of the start.

All three of the CUP1 class BMWs have been nose-to-tail since the start with the #79 Bonk Motorsport-Duwo Racing M235i Racing barely in front at three hours. The #75 Küpper Racing BMW E46 M3 has control of the A5 class while the #115 Danish entered Peugeot RCZ is narrowly ahead of their closest rival in the A2 class, the #112 Renault Clio of Switzerland’s Presenza Racing Team. There was one brief Code 60 neutralisation in order to retrieve a piece of debris.