Hexis Racing is getting ready to head for the circuits again.

Hexis Racing is getting ready to head for the circuits again. On Tuesday 12th and Wednesday 13th February the team’s two McLarens will have to cover only a few metres to roll into the pits on the Lédenon track and kick off their pre-season preparation. 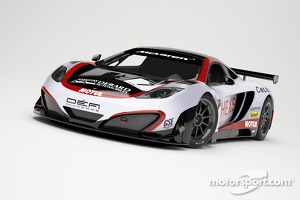 Alvaro Parente, Alexander Sims and Stef Dusseldorp, the three drivers entered in the Blancpain Endurance Series Pro Cup, will be on hand to do the testing as well as Olivier Panis, who is spearheading the team’s attack in the French FFSA GT Championship.

The main aim of the test is to get to grips with the 2013 version of the McLaren MP4-12C GT3. Modifications have been made to the ecu, the electrical system, the dampers and the car also has a new aero package and cooling system. These evolutions will be tested with both the Pirelli tyres used in the Blancpain Series and the Michelins in the French Championship.

This test also provides an opportunity to admire the 2013 livery of the Hexis Racing McLarens. It is low-key, hard-hitting and faithful to the decoration used in the 2011 campaign in which the French squad clinched its first world title. Adrien Paviot’s design agency Com’On is behind the project. “The aim was to integrate new partners while keeping the visual identity in compliance with the team’s graphic chart. We’ve worked with new tools to present the result in 3D!”

After Lédenon, Hexis Racing will go to Motorland Aragon for more testing on 26-27-28 February. There the four drivers present in the South of France this week will be joined by the rest of the squad: Laurent Cazenave, Jean-Claude Police, Eric Debard and Côme Ledogar.