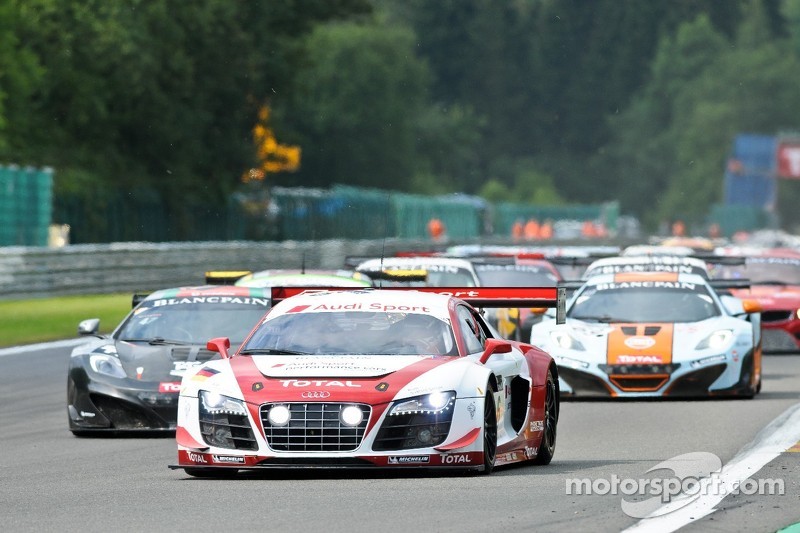 No matter how spectacular the 65th edition promises to be, the Total 24 Hours of Spa is much more than just a 24-hour race.

Six other series will be taking part in the event, with between them a grand total of 468 drivers and 214 cars. This busy schedule of support events has seen SRO Motorsports Group fill all the existing paddock space, as well as creating new ones including opposite the F1 pit building. This exciting mix of GT, Touring cars and single-seaters will culminate on ‘Super Friday’, with no fewer than six races as well as the Superpole, setting the grid for the Total 24 Hours of Spa.

As a Formula One circuit, Spa has a special attraction for all aspiring Grand Prix drivers, and all the competitors in the Cooper Tires British F3 International Series and the Formula Renault 2.0 North European Cup will be keen to gain the most experience possible around the challenging circuit. The Lamborghini Blancpain Super Trofeo will make an emotional return to competition after the tragedy which struck at the previous round. BRCC is the leading Belgian Championship; for this round, it will benefit from the support of the Dutch GT and Aston Martin series. Combined, they should make up a grid of more than 50 cars for their Endurance and Sprint races, providing a fine backdrop for the Total 24 Hours of Spa. For the public as well as the teams and drivers, the non-stop action should make this a weekend to remember.

The Swiss driver Cédric Leimer takes a considerable 20 point lead to Spa, which he will be looking to defend from three main protagonists – the South African ace and former Red Bull Junior driver, Adrian Zaugg, the hard-charging Imperiale driver, Andrea Amici, who won in Belgium last year and last year’s amateur title-holder, Leonardo Geraci. Leimer’s team-mate Laurent Jenny has enjoyed a matchless season, finishing every race on the podium catapulting Autovitesse Garage R. Affolter to the top of both teams’ championships. The field of Super Trofeo drivers will be marking the race with a number of tributes to their friend and competitor, the late Andrea Mamé, who was involved in a fatal accident at Paul Ricard recently. The championship will be honouring the memory of the Italian race driver in tributes that will be announced over the race weekend.

Lamborghini Blancpain Super Trofeo track action starts with two practice sessions on Thursday, with qualifying and the first 50 minute race on Friday and the second race on Saturday.


The biggest change in the 2013 BRCC Championship was without any doubt the very spectacular reshuffle of the sprint races : the 2 x 30’ format was changed into 4 x 15’ with appearances of the Leading Car, each time regrouping the pack of the field with the Ginetta, BMW M3, Silhouette, SEAT. Result was nail-biting constant door-to-door fighting until the chequered flag. The past three meetings gave drivers, teams and spectators a beautiful show with spectacular overtaking, and fights for victory in the various classes until the bitter end. Because the timing of the Total 24 Hours race is extremely tight, and the Sprint starting grid will be extremely large with the arrival of the Dutch GT Championship and Aston Martin GT4 Challeng participants, the BRCC promoters exceptionally went back to the “old” 2 x 30’ sprint format.


This year’s Endurance grid with a mix of GT4s, touring cars and silhouettes is being “managed” by means of a number of obligatory pitstops per class of car. This number of pitstops is being calculated and determined by the RACB. The Endurance 90’ opening round at Circuit Zolder went to the Audi R8 of Anthony Kumpen-Maarten Makelberge-Bert Longin. The following two rounds at Dijon and Francorchamps however saw the Aston Martin Vantage GPR dominating the pack, with the trio of Tim Verbergt-Damien Dupont-Bert Redant steering the car to victory.

After three races it was clear that the long(er) obligatory pitstops could not prevent the fastest cars on the grid being in front and fighting for victory until the last lap. On paper, ten teams could have a go in the shortened 60’ endurance race at Spa. Apart from the Audi and the Aston Martin, let’s not forget the leaders in the championship Bouvy, Coens and Grandjean (Porsche).


The Cooper Tires British Formula 3 International series bursts into action next weekend at the Belgian Grand Prix circuit of Spa-Francorchamps next week (25-27 July) for the latest rounds of the 2013 season. Twelve cars from five of the best UK teams in International Formula 3 racing are set to do battle; Carlin, CF Racing, Double R, Fortec and Team West-Tec will all compete for three 30-minute races that form the support package of the prestigious Total 24 Hours of Spa.

Qualifying gets underway on Thursday at 17:30, and race one is on Friday at 10:10, before race two later the same day at 13:30. Saturday sees the start of the final race of the weekend, beginning at 11:50 and broadcast live on Motors TV across Europe. The next race for British F3 is in just over a fortnight back in the UK at Brands Hatch on the legendary GP circuit.


The Formula Renault 2.0 Northern European Cup nowadays counts as one of the most important stepping-stones to Formula One. No less then six NEC graduates are currently participating in the Formula One young driver test at Silverstone. With four Grand Prix tracks on the calendar, over thirty competitors and 21 different nationalities represented, NEC stands as the ideal preparation for any international racing career. Looking ahead on the Spa weekend, Caterham Development Driver Matt Parry has a firm lead on the standings halfway the season and will seek to extend his lead. Parry’s direct competition for the title can be found in Jack Aitken (Fortec Motorsport) and Dennis Olsen (Josef Kaufmann Racing). The Brit and Norwegian will push to regain some ground. Meanwhile, frontrunners such as Oliver Rowland from EUROCUP rejoined the field, promising a fight for every meter of tarmac.


The HDI-Gerling Dutch GT features a strong line-up of the best PRO and AM drivers of the Netherlands, like Duncan Huisman, Ricardo van der Ende and Cor Euser. In the frantic battle for the title, you will see the fastest GT4 cars in action. Will the strong BMW M3 take win at Spa, or will it be the lethal Chevrolet Camaro that passes the finish line in first? And of course never underestimate the splendid performances of the Lotus Evora GT4, Aston Martin Vantage, Ginetta G50 GT4 and the quick Nissan 370Z GT4. At Spa, the grid is joined by the competitors from the Avon Tyres GT4 Trophy, the series that visits various European circuits. Some strong international drivers take up the challenge and will be battling for champagne in three spectacular races. Although the weather could be a crucial factor during the weekend, spectators can already be prepared for some nice motorsport thunder in the Ardennes!


After the very successful Aston Martin Centenary event at Brands Hatch, the GT4 Challenge moves to the beautiful Ardennes forest and the Total 24 Hours of Spa. This year’s Challenge has been very open with British drivers Andrew Jarman, Tom Black, Chris Kemp , Mike Brown, Paul Cripps and Belgian star Olivier Bouche all fighting for the honours, Spa is a very challenging prospect for all the teams and being on Olivier’s home territory should put the rest of the field under even more pressure. This weekend will see Aston Martins centenary celebrations continue with four Vantage GT3 cars fighting for glory in the Total 24 Hours of Spa and a very strong grid of Vantage GT4`s racing in the Aston Martin GT4 Challenge of Great Britain.

The GT4 Challenge is a unique opportunity for racing drivers of all abilities to compete in identical Aston Martin Vantage GT4 cars, racing head-to-head at some of the best circuits in the UK and Europe. All the teams compete in the same cars, meaning the skill of the driver and the race strategy can play a decisive factor in the result.

The Aston Martin Vantage GT4 is based on the V8 Vantage road car and features a 445 bhp engine with paddle-shift or manual transmission. Its 50:50 weight distribution and driver aids such as Bosch race-developed ABS and traction control make the car very easy to drive. Indeed the car is identical to that used in many of the major 24 hour races around the world, where the Vantage GT4 has proved to be so successful.

Blancpain - Over 275 years of tradition in motion


Founded in 1735 by Jehan-Jacques Blancpain, the watch brand bearing his name is the oldest in the world. Blancpain is currently engaged to the renewal of mechanical watchmaking and to passing on exceptional expertise from one generation to the next through constant investment in human resources, production facilities and research. This approach is its strength and the expression of our long-term vision, even though it goes against the tide of a certain tendency to seek immediate profit.

From the creation of components through to watch design, Blancpain is distinguished by its ability to develop exceptional movements. Over the past eight years, the Manufacture has indeed developed no less than 29 new calibres. Through its various models, Blancpain preserves its heritage of precision and elegance, while also displaying an innovative and occasionally provocative spirit. Its range encompasses the sportive L-evolution line, the legendary Fifty Fathoms diver’s watch, as well as the classic Villeret collection, the high complication from Le Brassus collection and the Women models.


A top-tier international oil company, Total is also a global gas and petrochemical operator. Active in over 130 countries, our 96.000 employees implement their expertise in several industrial areas such as exploration and production of oil and natural gas, refining and chemicals, trading and shipping of oil products and new energy resources. This way, our employees contribute to the worldwide energy demand of today and tomorrow. The 4.800 Belgian employees of our Group are mainly active in refining and chemicals and marketing and services.

As market leader, Total Belgium is known for its innovative products and services. By supplying energy solutions, we help our customers reduce their energy consumption. Our Excellium fuels and Fuel Economy lubricants, for example, are two product ranges valued for their good results. Moreover, the diversity of products is much appreciated: ranging from heating oil and wood pellets to lubricants, automotive and aviation fuels to bitumen, Total covers all market demands. In addition of the 500+ service stations (including 12 with recharging stations for electrical vehicles), the Total network consists of multiple regional centers and depots and 126 distributors spread across the country. At Total, we focus on the customer!


Pirelli is a tyre manufacturer and world leader in the automotive industry. It has an exclusive relationship with over 50 racing series worldwide, including Formula One.

Pirelli has a long and illustrious history in endurance racing, and has also claimed a huge variety of class wins in GT racing all over the world.

The design of the new Pirelli GT tyres meets the needs of the Blancpain Endurance Series while maintaining the performance characteristics that endurance drivers have appreciated in the past. The slick tyres used for GT racing are branded P Zero: just like the slicks that have become a central feature of Formula One. The name P Zero is used in the highest categories of motorsport such as GT racing.