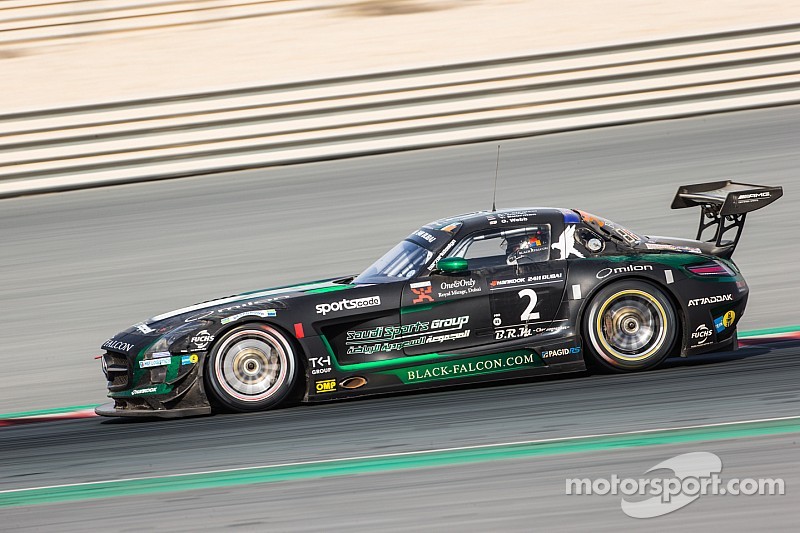 In addition to the overall victory, Team Black Falcon was 1-2 in the Porsche Cup Class.

Team Black Falcon’s 2015 motorsport season has kicked off with a bang as the team completely dominated the 24 Hours of Dubai this weekend at the Dubai Autodrome, taking the overall victory and a 1-2 in the Porsche Cup Class.

The weekend started off smoothly for the #2 Black Falcon Mercedes (Buurman/Haupt/AlFaisal/Webb), which set the second fastest time in qualifying, but it was a little less satisfying for the #3 Abu Dhabi Racing Black Falcon car that settled for P6 (Bleekemolen/Schneider/Al-Qubaisi/Simonsen), and then dropped to P9 after a receiving penalty on Friday’s warm-up session.

A clean start by both Black Falcon Mercedes in Friday’s race helped them maintain their positions and avoid any collisions, but they were both soon on the attack, with the Black Falcon #2 taking the lead after just 1 hour of racing, while the #3 Abu Dhabi Racing Black Falcon slowly made its way up the order.

The #3 Abu Dhabi Racing Black Falcon found itself in P2 behind the leading #2 Black Falcon after just 3 hours of racing, but the #3 car’s hopes of fighting for the win were banished when it was hit by a backmarker, forcing it to pit for repairs. The team worked tirelessly to get it back into the race, but the SLS AMG GT3’s chassis was damaged and the car had to be officially withdrawn from the race.

After four hours of the Hankook 24h Dubai race, the Black Falcon #2 had built up a comfortable lead in the overall standings, and the #26 and #25 Black Falcon Porsches were running 1st and 2nd in the Porsche Cup Class.

From then on, it was a matter of pulling away, with the sole issue throughout the race appearing on the Porsche Cup-class leading #26 Porsche after 20 hours of racing. Following swift repairs by the team, the car rejoined the race in second place behind its sister #25 car, before re-taking the lead in the dying stages of the race.

At the end of the exhausting 24-hour race and after 604 laps, Black Falcon #2 crossed the finish in first place overall, 4 laps ahead of everyone, while the two Porsches underlined Black Falcon’s dominance by taking a 1-2 in the Porsche Cup Class, with the #26 finishing first ahead of the #25 Porsche.

Black Falcon’s target was met and it has started the new year in spectacular fashion!