This year, the team doubled up with their second consecutive win in the first international endurance race of the year for GTs, touring cars and 24H Specials.

After 24 hours, Abu Dhabi based driver Khalid Al Qubaisi drove the team’s gullwing sportscar with starting number 1 across the finish line as the winner. 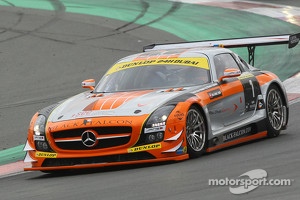 Al Qubaisi and his team mates Sean Edwards from Great Britain, Jeroen Bleekemolen from The Netherlands and five times’ DTM champion Bernd Schneider from Germany had completed a total of 600 laps at the 5.390 kilometres long Dubai Autodrome, equalling a distance of 3,234.000 kilometres.

The eighth running of the Dunlop 24H DUBAI was an emotional roller-coaster ride for the members of the Team Abu Dhabi by Black Falcon. On Wednesday, one of their two Mercedes-Benz SLS AMG cars was damaged beyond repair due to a crash in testing. 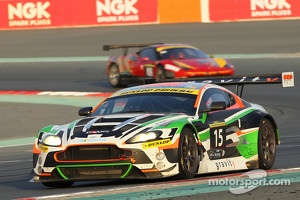 The team bought a spare car from the British Preci Spark outfit and converted that to endurance racing specifications, but that meant the mechanics had already worked two nights before the race even got underway.

In the race, the car was in the top five for almost all of the 24 hours and as various other contenders either lost time or retired with numerous incidents and accidents, the SLS AMG gradually moved up through the ranks and went on to win.

“An incredible feeling,” said Khaled Al Qubaisi, who got the honour of climbing onto a camel after the race for the ride to the winners’ podium in true Dunlop 24H DUBAI tradition.

Al Qubaisi, Bleekemolen and Edwards now all have two overall wins in the Dunlop 24H DUBAI to their name, whereas Bernd Schneider added his maiden win in the endurance event to his already impressive achievement list.

Bleekemolen also having finished second in 2008, the Dutchman is now the most successful driver in the eight years’ history of the Dunlop 24H DUBAI.

The attrition rate in this year’s race was unusually high. Among the many retirements were the two BMWs of the Saudi Falcons Team, run by the German Schubert Motorsport outfit, overall winners in 2011. 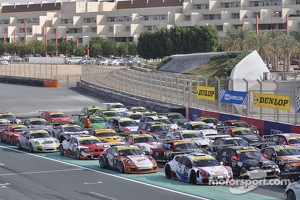 The Italian AF Corse team also lost one of its two Ferraris early in the race, but saw its other car (#16) finish in second place overall.

The battle for third place was a close call between the #8 Fach Auto Tech-Porsche and the #15 Craft Racing AMR-Aston Martin. Eventually, the Aston Martin team came out on top.

The Fach Auto Tech team saw both its cars finishing fourth and sixth overall and first and third in the A6-Amateur class. 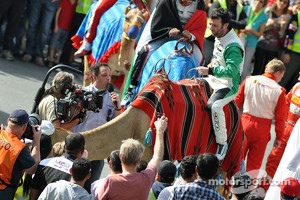 The best-placed A5 class car was the #63 JR Motorsport-BMW E46 GTR with Pieter van Soelen, Harry Hilders, Koen Bogaerts and Bas Schouten, who led their class for most of the race.

The ninth running of the Dunlop 24H DUBAI is scheduled for January 9th till 11th, 2014.