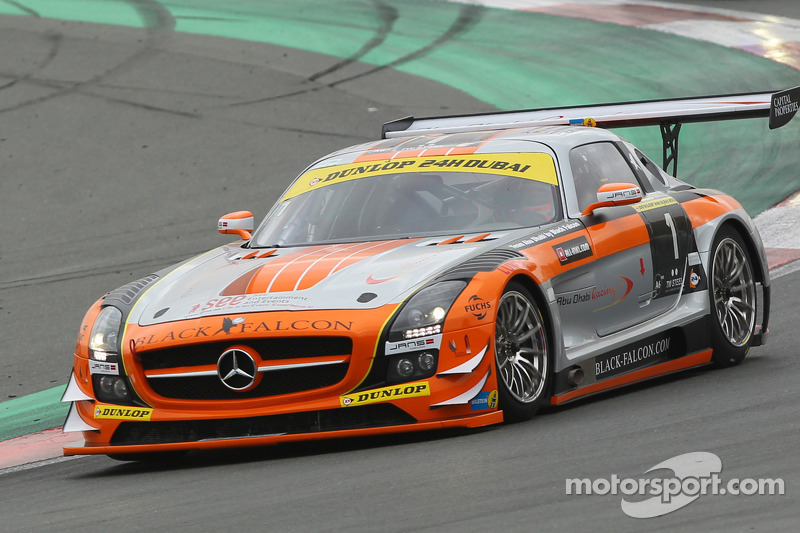 The pole position was made even sweeter with Qubaisi becoming the first Emirati to start from the number one spot in the 12-hour endurance classic.

In what is a dream result for local motor racing fans, Team Abu Dhabi by Black Falcon has claimed its first pole position in the third annual Gulf 12-Hours race held at the Yas Marina Circuit in Abu Dhabi.

The team's best lap time of 2:11.082 which was taken after the three quickest laps set by drivers Khaled Al Qubaisi, Jeroen Bleekemolen and Bernd Schneider were averaged, was good enough to snatch the coveted number one spot from the Kessel Racing Ferrari 458 GT3 which will start second with drivers Michael Broniszewski, Daniel Zampieri and Cesar Ramos recording a time of 2:11.377.

The pole position was made even sweeter with Qubaisi becoming the first Emirati to start from the number one spot in the 12-hour endurance classic.

"I'm very pleased, surprised and impressed," said a slightly stunned Qubaisi. "But it's really nice to get pole when you don't expect it. We had problems earlier and were a bit off the pace compared to the Ferraris so we are really happy. We're only half a tenth quicker than the guys behind us so it's not going to be easy and it's definitely one of the closest qualifying sessions I've been a part of," he added.

Teammate Bleekemolen finished at the top of the time sheets in Q2 and Schneider did what was required to take the overall P1 position finishing eighth. "I made one or two small errors in my session but the team as a whole did a fantastic job to get pole but it's going to be tough against so many Ferraris as well as the Bentley and Porsches,"Schneider said.

Making its world competition debut this weekend, M-Sport Bentley showed strong signs all day and impressed the entire pit lane by setting the fourth fastest time in the car's first ever race attempt.

Driver, Guy Smith who was a part of Bentley's last great motorsport triumph, victory in the 2003 Le Mans 24-Hour, is remaining cautiously optimistic about the Flying B's potential.

"I'm really impressed with the progress of the car so far, we're not expecting too much given that it's the car's first outing, but we are happy," Smith said.

"Compared to the sports cars I've driven in the past, this feels massive with the giant cockpit and all that glass so it's a totally different experience but one I'm really enjoying," he added.

On the Number 12 Kessel Ferrari 458 GT3 Thomas Kemenater and Giacomo Piccini were alone to share driving duties as teammate Kola Aluko couldn't make it to Abu Dhabi in time for qualifying and the race itself. As a consequence, the yellow Ferrari won't take the start tomorrow morning, as two-driver line-ups are not allowed in the Gulf 12 Hours.

In the CN Class Guglielmo Belotti, Alessandro Latif and Ivan Bellarosa took pole, but an engine issue in the second session didn't allow Bellarosa to drive in the third session and could end in a withdrawal for the fastest prototype car.

All the action start at 9.30am local time as the first 6-Hour half of the race gets underway with the field returning to the pits for a1hr: 25min break before the second half gets under way at 17.55pm and runs through until 00:05am.

Salaquarda, Flohr and Castellacci at the 12 Hours of Abu Dhabi with Kessel Racing