The 2014 Dunlop 24 Hours of Dubai on 9, 10, 11 January is fast approaching and along with over 80 teams including some 400 drivers from over 40 countries, set to line up on the grid, there will also be a strong contingent of competitors with a distinct UAE link at the ninth edition of this endurance classic at Dubai Autodrome.

Topping the list is double winner Khaled Al Qubaisi who is intent on a hat trick of victories at his home race - which he and his team won in 2012 and 2013 - and will again line-up with two outfits in Team Abu Dhabi by Black Falcon colours.

Overall victory is very much in the sights of this formidable line-up, who know their way to the top step of the podium at Dubai Autodrome, and thus will invariably start the race as the team to beat. 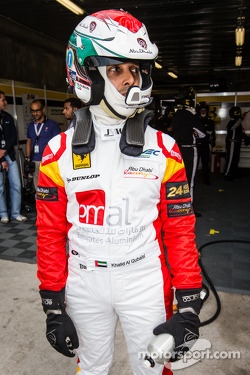 The Moutran brothers including UAE champion Sami, along with Nabil and Ramzi will be joined by British ace Phil Quaife in the Memac Oglivy Duel Racing Seat Leon Supercopa with A3T Class victory in their sights.

Lap57 Racing Team, who have a rich pedigree in UAE national racing, have entered their pocket rocket Honda in the A2 Class with the trio of UAE champions Mohammed Al Owais, Nadir Zuhour and Umair Khan joined by Abullah Al Hammadi and Japan's Junichi Umemoto.

SVDP Racing have entered their class winning BMW 120D with former UAE champion Spencer Vanderpal joined by Dubai based duo Jason O'Keefe and Chris Wishart, along with South African Kris Budnik and Dutchman Wubbe Hertaar. Emirati driver Bashar Mardini will be part of the Italian run GDL Racing line-up which includes Nigel Farmer, Paul and Ray Stubber at the wheel of a Porsche.

Abbas Al Alawi is the only UAE driver in an otherwise all Qatari line-up consisting Saif Al Naemi, Hamad Al Asam, Abdulaziz Abdulla and Abdulla Al Kharaan who will share a Suzuki Swift.

UAE teams have become increasingly potent over the years, improving with each edition of the Dunlop 24 Hours. Several teams have notched up class wins during the course of the past decade. This time around, as in the past three years, an Emirati driver or team is capable of claiming the top prize in the UAE's biggest race while a number of other local drivers could also be celebrating on Saturday afternoon.

Dubai Autodrome general manager Richard Birch commented, "It is always great to see home grown talent show their skills on an international stage. It gives us who live in the UAE something to cheer about and be proud of at the Dunlop 24 Hours."

"With the likes of Abu Dhabi Black Falcon and Dragon Racing capable of winning the race outright, and the likes of Lap57 Racing Team, Memac Ogilvy Duel Racing and SVDP Racing capable of class wins adds all adds local interest to this multi-national event. All this, coupled to UAE drivers in action for international teams, provides valuable inspiration and motivation for local racing drivers," added Birch.

Extensive media coverage is ensured for this year’s race. Once again, Radio Show Limited, the experts behind Radio Le Mans, will be on board, while Quattro Media will again be producing television footage to be broadcast live on Motors TV and various other channels. A live stream will also be available throughout the race on the official 24 Hours of Dubai website.

On track action starts on Wednesday, 8 January with optional Private Testing which should see most of the ‘big guns’ out to dust off the festive season cobwebs.

The first of three Free Practice sessions will get underway at 11:30 am on Thursday, 9 January. This is followed by three qualifying sessions, the first of which gets going at 15:00 pm on the same day.

Friday, 10 January, track action starts at 10:30 am with a half hour warm-up, with the race set to be flagged off at 14:00 pm. The chequered flag will wave, to bring proceedings to an end 24 hours later, on Saturday at 14:00 pm. This will be followed by podium ceremonies for all classes.

Entry for spectators is free throughout the weekend, including qualifying and race days, with access to grandstands and the Paddock Village where a myriad of activities will be on hand to keep fans thoroughly entertained.