Hexis Racing is taking part in a Pro championship, the Blancpain Endurance Series of which the Spa 24 Hours is the blue riband event.

Over the last three seasons Hexis Racing’s biggest adventure was the FIA GT1 World Championship. From Europe to China, from Argentina to Russia and from Brazil to Abu Dhabi, the French team won the World title sandwiched between two runner-up finishes. This year its priority aim is to put on an outstanding performance in the Spa 24 Hours. 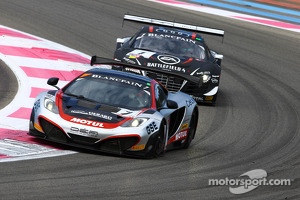 It has what it takes to back the challenge it has launched against the established front-runners in GT endurance, namely: talented drivers, the backing of McLaren GT, excellent results in the Blancpain Series and a maiden outing in the Belgian classic in which it almost scored a top-3 finish in 2011!

The programmes implemented this season dovetail perfectly with this strategy. Hexis is taking part in a Pro championship, the Blancpain Endurance Series of which the Spa 24 Hours is the blue riband event. The French team is also entered in the FFSA French GT Championship, which has a Pro-Am formula.

At Spa-Francorchamps it will run one of its McLaren MP4-12C GT3s (no. 7) in the Pro Cup with its usual line-up consisting of Stef Dusseldorp and works McLaren GT drivers Alvaro Parente and Alexander Sims. The second car (no. 107) is entered in the Pro-Am Cup for Olivier Panis, Laurent Cazenave and Eric Debard, three of the four drivers racing in the French Championship backed up by young charger, Côme Ledogar.

Philippe Dumas gives us his impressions with just a week to go to the opening of hostilities! “I’ve got a strange feeling about this race. On the one hand, I’m split between the pressure of the event and the desire plus the obligation to do a good job. On the other, we’ve been preparing for this race in such a meticulous fashion that I’ve got great confidence in our team and I believe we can pull off a fantastic result.

Over the years this event has become the greatest GT endurance race in the world. Even if we’ve already written a few fantastic lines in our results, this one would undoubtedly be one of the most prestigious, before possible major changes within our team in the near future. So we’re racing in the Spa 24 Hours to win, with our drivers, mechanics, engineers, our technical and logistics squads, with - and for - McLaren GT.”