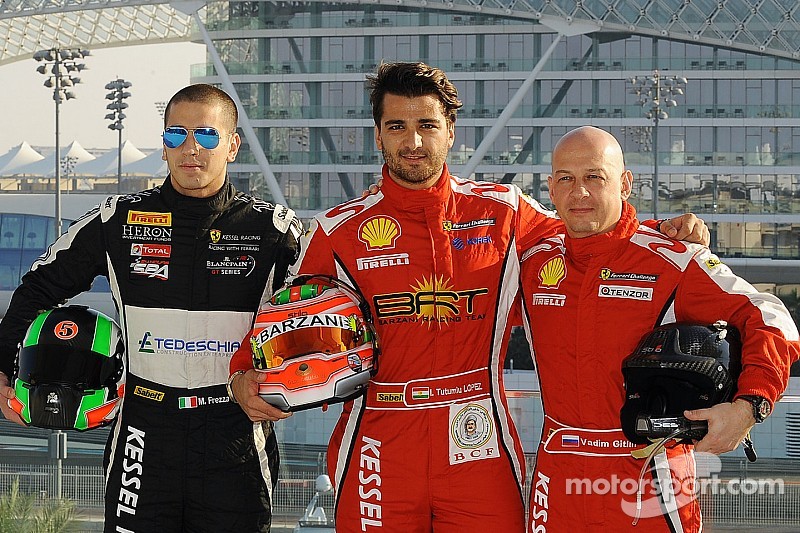 The Spanish driver of Kurdish ancestry and Barzani Racing Team made an impression on their debut at Kessel Racing in the Gulf 12 hours, and Isaac Tutumlu will start second on the starting grid among Pro-Am contenders and sixth overall. Heat 1 is assumed to be very demanding for drivers due to high temperatures.

Tutumlu and Barzani Racing Team have another challenge in sight before the end of the year. This challenge is called the Gulf 12 hours, an endurance event held at the Yas Marina Circuit in Abu Dhabi. The Spaniard of Kurdish heritage debuts behind the wheel of a Ferrari 458 GT3 fielded by Kessel Racing and shared with Italy´s Marco Frezza and Russia´s Vadim Gitlin. They are entered in Pro-Am class and their performance during today´s qualifying session lead them to be optimistic for tomorrow.

Second and third in the free practice session, Gitlin finished third in class in Q1 and then, shortly after, the Spaniard was second – beaten by Hubert Haupt, an experienced German driver, by a mere half a second and finally Frezza claimed first by topping the timesheets. In the combined qualifying times the trio qualified 2nd in Pro-Am and 6th overall.

“We performed extremely well today in qualifying, as we finished 2nd. My adaptation was pretty quick driving the Ferrari, and I learned as much as possible from Marco, with plenty of experience driving the cars built in Maranello. We are a balanced driver line-up, because Vadim is also pretty fast."

"This race will be quite challenging, mainly Heat 1 because of high temperatures, so it is going to be important to drive without excessive fatigue, and keeping the car in one piece. Then, in Heat 2, it is the right moment to push at night. I think we are able to finish on top of the podium!”, Tutumlu explains.

The race takes places tomorrow and there are scheduled two 6-hours heats.