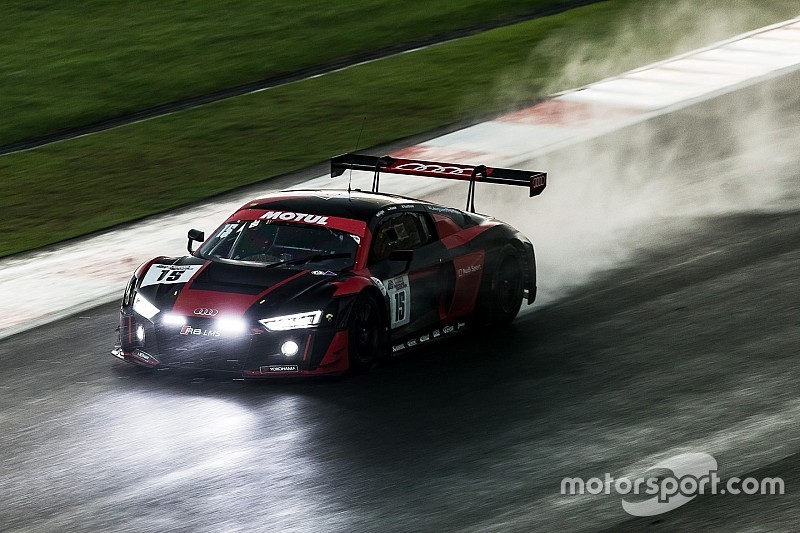 The #15 Audi of Christopher Haase, Robin Frijns and Laurens Vanthoor took a dominant victory in a rain-affected Sepang 12 Hours, but Porsche denied the Phoenix-run R8 LMS cars a one-two finish.

The victory was the second Sepang triumph for both Audi and its star man Vanthoor, who is leaving the marque he's raced for since 2011 to join Porsche next season.

In winning the race, Vanthoor also became the champion of the inaugural Intercontinental GT Challenge, the Belgian having finished on the podium in the Bathurst 12 Hours and the Spa 24 Hours.

The arrival of rain at the four-hour mark was what initially allowed the Audi cars to move into a winning position, as a pair of perfectly-timed stops to take on wet tyres - combined with problems for both works Manthey Porsches - put the Ingolstadt marque's representatives in the driver's seat.

But it was the leading #15 car, which had started from the pitlane due to a power generator issue, that had the better pace.

Stunning mid-race stints by Vanthoor and Haase meant the gap to the sister #16 Audi grew from around 40 seconds at half-distance to over two minutes by the time of the Full Course Yellow period with three hours to go.

A free stop during the FCY for the #15 car put it a lap up on the nearest opposition, before an actual Safety Car another hour or so later cemented its advantage further still, giving it a lead of nearly two laps.

The Safety Car had the opposite effect for the #16 Audi of Rene Rast, Pierre Kaffer and Markus Winkelhock, which found its advantage over its two closest pursuers reduced to nothing.

Kaffer in particular struggled on the restart as the rain intensified again, and was powerless to hold off the better of the Porsches, the #911 of Nick Tandy, Earl Bamber and Patrick Pilet, as Bamber drove around the outside of the #16 Audi at Turn 1 with an hour and 40 minutes remaining.

For the final hour, the #16 crew opted to send out Rast on slicks in a gamble to challenge for runner-up, but the track did not dry enough for the German to make significant inroads on the Porsche.

The #50 Spirit of Race SA Ferrari of Alessandro Pier Guidi, Michele Rugolo and Pasin Lathouras looked the quickest on track in intermediate conditions, but came up just short in its podium challenge, finishing a close fourth behind the #16 Audi.

Among the other notable entrants, the #912 Porsche of Michael Christensen, Frederic Makowiecki and Richard Lietz wound up fifth, delayed by a brake problem before mid-distance, while the #9 K-PAX McLaren of Alvaro Parente, Come Ledogar and Australian Supercars champion Shane van Gisbergen could only recover to 10th after early-race suspension issues.

Mustang made eligible for Bathurst 6 Hour