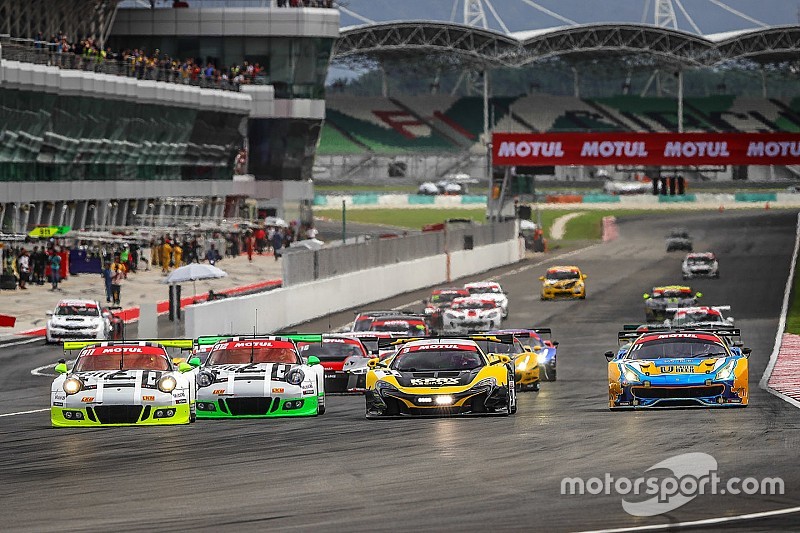 Audi was in command at the halfway mark in Sepang 12 Hours, with its #15 car leading the sister #16 machine after having started from the pitlane due to an electrical issue.

The start of the race saw the #911 Manthey Racing Porsche driven by Earl Bamber take the lead from third on the grid, with the sister #912 car of Richard Lietz dropping to third from pole behind the #9 McLaren of Alvaro Parente.

The biggest mover was the #50 Ferrari driven by Alessandro Pier Guidi, which made swift progress from 15th on the grid to get involved in the fight for second behind Lietz and Parente.

Pier Guidi then wasted no time passing both the Porsche and McLaren to take second, with Bamber still leading in the #911 Porsche.

After the first round of pitstops, Porsche ran one and two, as a brief safety car period allowed the #50 Ferrari to gamble with an early stop and go out of sequence.

McLaren's challenge suffered a blow after it was handed a drive-through penalty for violating track limits, before a suspension issue meant the #9 machine plummeted down the order.

The order at the front changed dramatically when it started to rain after the four-hour mark, with both the Phoenix-run Audis putting themselves into contention for the win after a slow start.

This put #15 Audi of Robin Frijns in a comfortable position out front, with Markus Winkelhock in the #16 behind as the #911 Porsche, now with Patrick Pilet driving, lost time by leaving its switch to wet tyres too late.

Meanwhile, the #912 Porsche dropped back after it was forced to stop due to a brake disc issue, which pushed the car two laps down in sixth place with Michael Christensen at the wheel.

Behind the top three, #50 Ferrari of Michele Rugolo runs fourth ahead of the #88 Lamborghini of Manabu Orido.