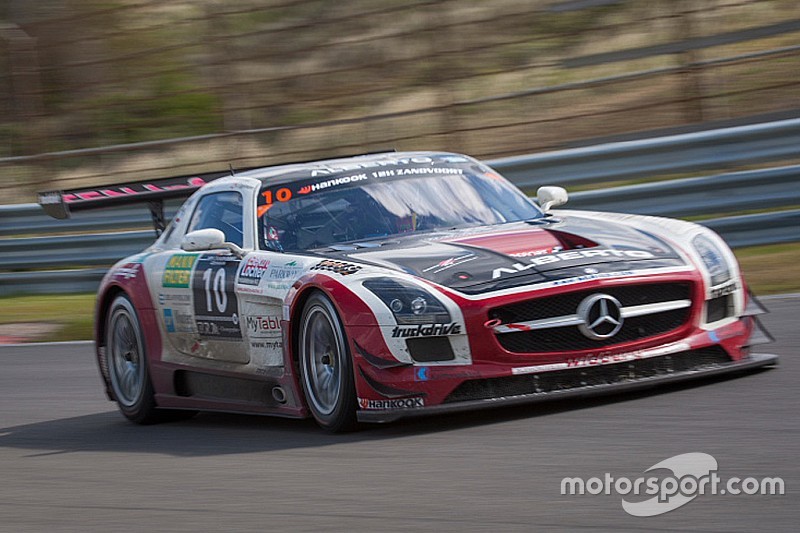 Second on the grid, 0.118 seconds behind the pole car, went to another Dutch driver in a Mercedes, Christiaan Frankenhout in the #10 Hofor Racing entry.

Montmelo – With a lap time of 2:05.991, Dutch driver Renger van der Zande placed the #5 Car Collection Motorsport Mercedes-Benz SLS AMG onto the pole position for the 24H Barcelona Trofeu Fermi Vélez. Second on the grid, 0.118 seconds behind the pole car, went to another Dutch driver in a Mercedes, Christiaan Frankenhout in the #10 Hofor Racing entry. The all-Mercedes front row will be followed by the Porsche of HB Racing Team Herberth with Alfred Renauer setting the fast lap. Alongside is the #4 Scuderia Praha Ferrari F458 Italia GT3 of Matteo Malucelli.

The top starting cars are all in the normally faster classes but there was a stunning turn of events which left the usually slower cars as the quickest overall during qualifying. The first session was reserved for the faster classes but was run in a steady rain. Conditions improved slightly at the start of the second qualifying period, which included only the smaller categories. Midway through the 45-minute period the track was dry enough so that the top 13 cars recorded times faster than that of the A6 class during the topsy-turvy session. Following the session officials decided that for safety reasons the final grid will retain the A6,SP2, and 997 cars at the front.

The #169 Chevrolet Corvette C6 of the RWT Racing Team was placed onto the SP2 class pole by Sven Barth with a time of 2:10.290. Next in the category was Miro Konopa in the #66 ARC Bratislava Porsche 997 Cup S and then the #32 Ayrton Intermotor Dodge Viper Competition Coupe. The three Lamborghini Hurracans in the field have been placed into a special class, SP-X, and this new category will be led by Milos Pavlovic in the #21 Sportec Motorsport entry.

The all-Porsche 997 class pole spot belongs to the #54 Drivex School Porsche 991 Cup driven by an all-Brazilian crew. Next up is the class championship leading #17 Ruffier Racing Porsche and then the #47 B2F Competition team.

Good conditions near the end of the second qualifying session meant that smaller class entries were all running on slicks. After a flurry of exchanges of fast laps the #43 APO Sport Porsche 997 Cup GT4 emerged the quickest with Alex Osborne setting a 1:59.292. He was followed by Bradley Ellis in the #163 Optimum Motorsport Ginetta G55 and then the #160 Cor Euser Racing Lotus Evora. These three represent the quickest cars in the SP3 class.

Two of the class pole winners set slightly slower times than the A6 cars with the A2 category leading #115 Team K-Rejser Peugeot RCZ coming in at 2:09.643 and the D1 leading #139 RCM Motorsport Seat Leon TDI at 2:17.343.The exciting and unusual nature of qualifying bodes well for an interesting race starting on Saturday afternoon.