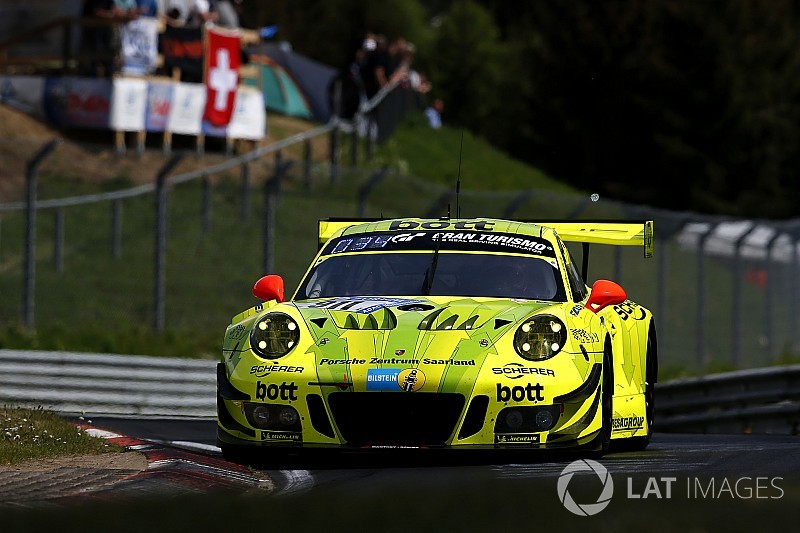 Vanthoor was only sixth fastest in the opening laps in the #911 Manthey Racing Porsche 911 GT3 R, but was quickest of all on his second tour of the fearsome Nordschleife.

The Belgian’s time of 8m09.105s was enough to beat Sven Muller’s #44 Falken Motorsports Porsche by 0.417 seconds and grab pole for the car he shares with fellow factory Porsche men Romain Dumas, Earl Bamber and Kevin Estre.

Muller was the first to set his time during the shootout and enjoyed an advantage of three tenths over Norbert Siedler in the #31 Frikadelli Racing Porsche after his first lap.

Few others besides Vanthoor were able to improve on their second lap, however, meaning the Falken and Frikadelli Porsches remained second and third, ahead of the best non-Porsche, the #4 Black Falcon Mercedes AMG-GT3 of Maro Engel.

Nicki Thiim was fifth-fastest in the #7 Aston Martin Vantage, followed by the #912 Manthey Porsche of Frederic Makowiecki.

Sharing the fourth row will be the HTP Mercedes cars of Dani Juncadella and Maxi Gotz, ahead of Yelmer Buurman in the second of the Black Falcon machines.

Completing the top 10 was Jesse Krohn in the best of the BMW M6 GT3s, the #99 ROWE Racing car, albeit 2.4s adrift of Vanthoor.

After topping Thursday night’s first qualifying session, Audi struggled for pace in the shootout, with its best car being the #1 Land Motorsport entry driven by Christopher Mies to 15th place, 3.4s off the pace.