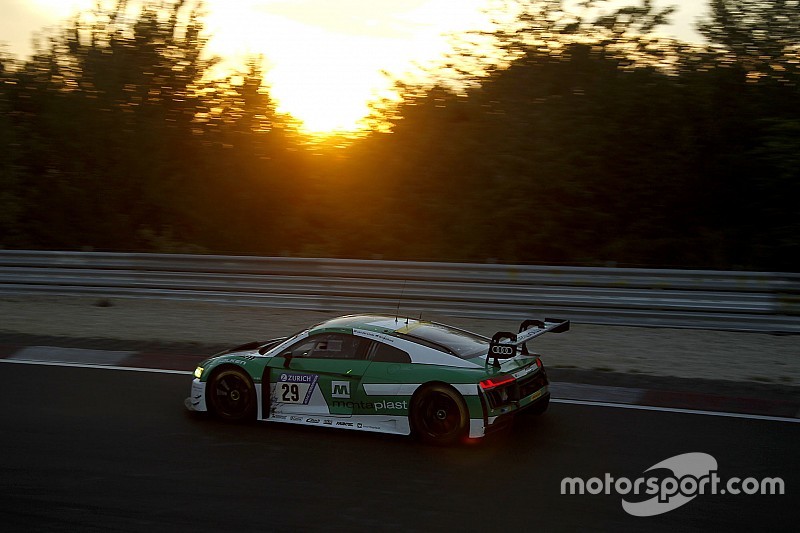 The #29 Land Motorsport Audi R8 LMS remains in the lead of the 2017 Nurburgring 24 Hours with a little under a quarter of the race remaining, with the #9 WRT Audi behind in second place.

After having taken the lead in the early hours of the race, Connor de Phillippi, Christopher Mies, Markus Winkelhock and Kelvin van der Linde successfully managed to stay in front all through the dramas of the night hours.

The #9 Audi of Nico Muller, Marcel Fassler, Robin Frijns and Rene Rast has traded positions with the #29 Land Motorsport car during pitstops, but overall still lies second about one minute behind.

BMW made the most progress during the night and after 120 laps now has five cars within the top 10.

The #98 ROWE Racing BMW M6 GT3 of Markus Palttala, Nick Catsburg, Alexander Sims and Richard Westbrook has closed to within 1m28 of the leaders, and heads the #43 Schnitzer Motorsport car of Augusto Farfus, Alex Lynn, Antonio Felix da Costa and Timo Scheider by only a few seconds.

"We thought we would be able to put a bit more pressure on the Audis," said ROWE Racing team boss Hans-Peter Naundorf. "However, if you're in the leading group after such a long time you've certainly done something right."

In fifth, about 2m50s behind the lead, is the leading Mercedes-AMG GT3, the #50 HTP machine of Dominik Baumann, Maximilian Buhk, Edoardo Mortara and Edward Sandstrom.

"I think we're a bit slower than Audi and BMW," said Buurman. "It'll be difficult to challenge them [for the win]. We need a bit of luck."