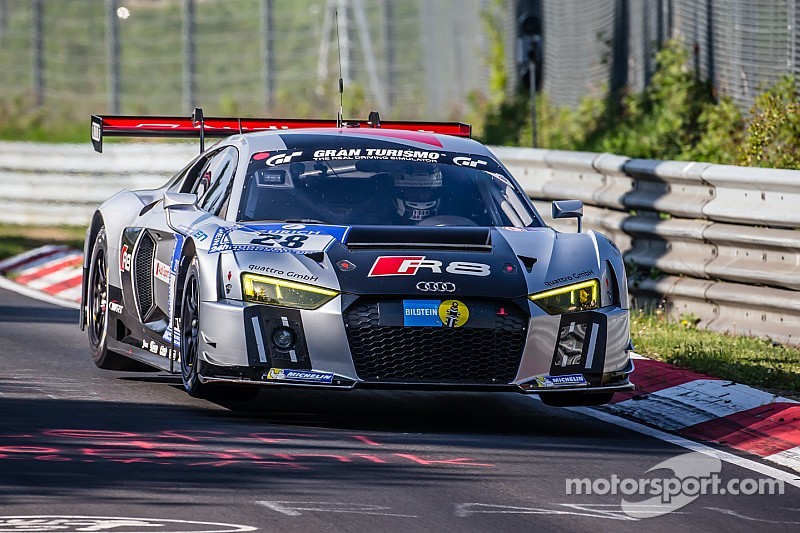 Ingolstadt/Nürburg – The Audi R8 LMS managed a brilliant 24-hour racing debut by clinching victory at the Nürburgring. Audi only unveiled its GT3 race car ten weeks ago – now the production-based sports car impressed in a tough battle that lasted up to the last hour of the race. In the end, Audi Sport Team WRT with Christopher Mies/Nico Müller/Edward Sandström/Laurens Vanthoor (D/CH/S/B) was 40 seconds faster than the BMW Team Marc VDS.

The battle for victory in the Eifel endurance race has not been as thrilling as this in a long time. During the 24 hours the lead changed 35 times – a record in the event that has been held since 1970. After the race’s midpoint, either the number ‘28’ R8 LMS or its fiercest rival was running in front, depending on the pit stop sequence.

We’re very happy that we can thank Audi by taking the first 24-hour victory of the new race car.

In the end, the Belgian Audi team prevailed with a concentrated performance of its drivers and solid teamwork. Vincent Vosse’s squad and each of the four race drivers celebrated their first victory in this classic event.

“This was a weekend of thrilling racing, as well as an intense and nerve-wracking one,” said Romolo Liebchen, Head of Audi Sport customer racing. “Sincere congratulations to our winners who never lost their cool even in the face of some minor irregularities and held up to the pressure. The whole squad of Audi Sport customer racing is happy to see the new R8 LMS instantly delivering on our promise of it being a competitive, attractive and reliable race car our customers can look forward to starting this fall.”

Vincent Vosse was delighted about another success of his young team: “We’ve already won the Spa 24 Hours with Audi and now we achieved success on the Nürburgring as well. My thanks for this go to a motivated squad, four talented drivers and to Audi Sport customer racing for their solid support. We’re very happy that we can thank Audi by taking the first 24-hour victory of the new race car.”

About 50 percent of the GT3 race car is based on its production counterpart it simultaneously celebrated its debut with in March at the Geneva Motor Show. Four new Audi R8 LMS cars were on the grid of the 24-hour race. Last year’s winners Christopher Haase/Christian Mamerow/René Rast/Markus Winkelhock in car number ‘1’ of Audi Sport Team Phoenix led the race several times but were forced to retire following an accident by Christian Mamerow. The German was hospitalized for observation. In the sister car, number ‘4,’ Mike Rockenfeller spun on track due to an oil spill shortly before the race’s midpoint. He was hit by another car that was following him, causing damage to the Audi that was too severe for continuing the race.

The second race car of the Belgian Audi Club Team WRT saw the checkered flag in seventh place. Accident damage had caused Pierre Kaffer (D) and his team-mates Christer Jöns (D), Nicki Thiim (DK) and Laurens Vanthoor (B) to lose three laps in the early stage. However, with good lap times, this driver quartet proved the competitiveness of the Audi R8 LMS as well.

Romolo Liebchen (Head of Audi Sport customer racing): The narrow gaps shown by the results can only give a vague idea of how thrilling GT3 racing is at the moment. Weve experienced a weekend full of emotions, with months of hard work behind us, and all this has culminated in a hard-fought victory. Thank you to everyone at Audi and Audi Sport customer racing, to all the teams and the drivers. This has been a solid performance. The career of the new Audi R8 LMS couldnt have begun any better. Sincere congratulations to the Belgian Audi Club Team WRT and to our four drivers Christopher Mies, Nico Müller, Edward Sandström and Laurens Vanthoor whove won this race for the first time.

Christopher Mies: It was a tough race and a close battle with BMW and Porsche. The new Audi R8 LMS was running well. There wasnt even the slightest problem. But during the night we lost three to four minutes due to a yellow period and, as a result, our advantage was gone. Afterwards, we really had to battle hard. BMW put us under a lot of pressure. The car was running superbly and the pit stops were brilliant. That was enough for us to win in the end with a 40-second advantage.

Nico Müller: Its incredible. My three team-mates, Chris (Mies), Edward (Sandström) and Laurens (Vanthoor), did an awesome job. The team made no mistakes throughout the race and our car was running superbly. This was the first 24-hour race for the new Audi R8 LMS  and we made it across the whole distance without any problems, especially at such high speed. We were constantly under pressure and always had to give everything. This victory is a sweet reward for everyone.

Edward Sandström: It was a tough race with many good teams and difficult weather conditions. My friends from the Belgian Audi Club Team WRT, just like Audi Sport customer racing, did a perfect job. The team performance simply fit. The new car meant a lot of work for all of us, which paid off. Driving a whole 24-hour race without the slightest problem deserves a lot of respect.

Laurens Vanthoor: These were the kinds of conditions that are so typical for the Green Hell  patches of rain and a dark sky early on Saturday night. It was difficult. We were set on making it through the night unharmed and managed to do this. Afterwards, the race turned into a sprint. For me, the first victory in the new R8 LMS will be an unforgettable experience. The car has instantly been reliable. This shows how well the whole Audi squad has been working. Thank you for this.