Belgian team on countdown to the next endurance classic and its home race.

The joy at a maiden podium for a BMW Z4 GT3 at the Nürburgring 24 Hours (DE) has not yet fully worn off, yet some of the BMW Sports Trophy teams are already set for the next endurance classic. The 65th staging of the 24-hour race at Spa-Francorchamps (BE) will take place on the iconic “Ardennes Rollercoaster” on 27th and 28th July. 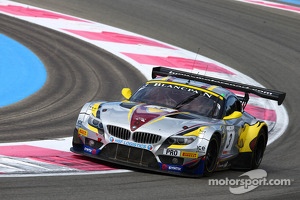 The Belgian Marc VDS Racing team will line up at its home race with three BMW Z4 GT3s. Vita4One Racing starts with another BMW Z4 GT3 in the highest category, the Pro Cup. In the Pro-Am Cup, ROAL Motorsport, TDS Racing and DKR Engineering will all run one BMW Z4 GT3 each.

The Belgian fans will be focussing primarily on Marc VDS Racing. The local team finished runner-up at this year’s Nürburgring to emphatically underline its class when it comes to marathon races. As on the Nordschleife, BMW works driver Maxime Martin (BE) will once again be at the wheel in Spa.

In the cockpit of the number 4 car will be Markus Palttala (FI), Henri Moser (CH) and Nicky Catsburg (NL). The third BMW Z4 GT3, car number 14, will be driven by Andrea Piccini (IT), Jörg Müller (DE) and Jens Klingmann (DE).

Vita4One Racing lines up with drivers Frank Kechele (DE), Greg Franchi (BE) and Stefano Colombo (IT). Kechele and Franchi represented Michael Bartels’ (DE) team in the BMW Z4 GT3 in 2012, finishing third to claim a place on the podium.

The weekend kicks off with a parade of all the cars from the racetrack to the town centre on Wednesday 24th July. Qualifying takes place on Thursday, between 20:10 and 23:10, followed by Super Pole at 18:15 on Friday. The race gets underway at 16:30 on Saturday and ends 24 hours later on Sunday.

Jens Marquardt (BMW Motorsport Director): “The Spa 24 Hours is, after the 24-hour race at the Nürburgring, the second highlight of the endurance season for BMW Motorsport. BMW cars have triumphed on 21 occasions in the past at this classic, and the quality of our teams gives me every confidence we can be in contention at the head of the field again this year.

Marc VDS Racing caught the eye with its second place on the Nordschleife, and is extremely motivated to produce a similarly strong performance at its home race. Vita4One Racing landed on the podium in Spa last year and is well capable of repeating that success. I also have my fingers crossed for our starters in the Pro-Am Cup and am looking forward to an exciting and high-class race.”

Bas Leinders (Team Principal Marc VDS Racing Team): “The race in Spa is our home event, at which we will have a lot of fans and partners cheering us on. That makes it an extremely important race for our team. Furthermore, the 24-hour race forms part of the Blancpain Endurance Series, so there are a lot of points up for grabs for a good result.

We need these points if we want to challenge for the title again. I am happy we are able to line up with three BMW Z4 GT3s and an excellent squad of drivers. That increases the chance of us achieving our goals. We have set our sights very high after the podium at the Nürburgring.”

Maxime Martin (BMW Z4 GT3, car number 3): “I am really looking forward to the home race for me and my team. The many good results over the past few months, including my maiden ALMS win in Long Beach, the podium at the Nürburgring 24 Hours and the victory in the Blancpain Endurance Series in Le Castellet, have given me a lot of confidence. The BMW Z4 GT3 is a magnificent car, and I think we will be very competitive with it in Spa.”

Markus Palttala (BMW Z4 GT3, car number 4): “I live very close to Spa, my favourite circuit. I won the 1000-kilometre race there and have also claimed a class victory at the Spa 24 Hours in the past. My best overall result was last year’s fourth place. This time I am hoping to get the chance to challenge for the win. Our opponents are very strong, but we have a great car and great drivers.”

Jörg Müller (BMW Z4 GT3, car number 14): “After my long, enforced break, I am now extremely motivated to finally race again in the BMW Z4 GT3. I am really looking forward to the opportunity to represent Marc VDS Racing at the 24-hour race in Spa. The fact that the very same circuit was the scene of my crash in May, which forced me out of the Nürburgring 24 Hours, is not an issue for me. I also have very fond memories of the circuit in Spa-Francorchamps. I have already won the 24-hour race here back in 1996.”