Lead changes again as rain falls at The Ring 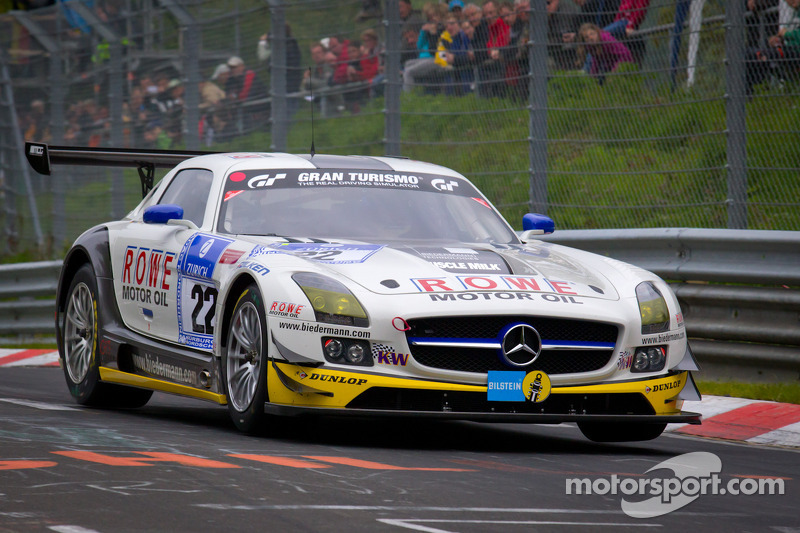 Choosing the right tyres in changeable conditions is one of the most important skills in endurance racing, and those that did so reaped the reward when the long-expected rain finally fell at the Nurburgring shortly after dawn. Christopher Mies was at the wheel of the leading #2 Team Phoenix Audi R8 when the rain came, and was caught out before making it back to the pits to change his dry tyres. He appeared in the pitlane needing not only wet rubber but also damage repaired, putting an end to the car's time in first place.

After a hectic period in which every car in the field came in to change tyres, the #22 Rowe Racing Mercedes SLS, which had been running second before the rain, was elevated to the race lead with drivers Klaus Graf, Thomas Jäger, Alexander Roloff, and Jan Seyffahrt behind the wheel for their stints during this demanding 24 hour race. Another team to do well amidst the chaos was the #3 Team Phoenix Audi R8, with Marc Basseng, Christopher Haase, Frank Stippler and Markus Winkelhock now running second – in stark contrast to the misfortune of their team-mates in the #2. 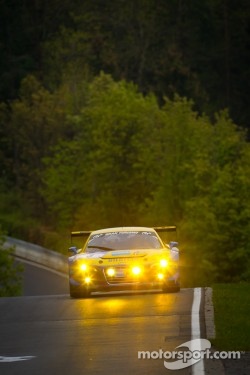 BMW's best hope of repeating its 2010 Nurburgring 24 Hours victory has now shifted from the #19 to the #20 car. Claudia Huertgen and her team-mates Schwager, Bastian and Adorf have been unaffected by the driveshaft issues that halted the #19 car's charge and continue to set competitive lap times on the damp track in third place. Fourth place belongs to another Audi R8 – the Raeder Motorsport car of Christian Hohenadel, Luca Ludwig, Thomas Mutsch and Le Mans winner Frank Biela, which has been steadily climbing up the order over the last couple of hours.

The rain has also benefitted the pair of Manthey Porsches, which are now running together in fifth and sixth ahead of the Mamerow Racing Audi in seventh. Previous race leader the #65 Hankook-Heico Mercedes SLS AMG has not done well out of the rainfall, and is now the penultimate car on the lead lap, in eighth overall.

Taking a look at some of the other class battles, the SP4T class for GT4 cars has become an all-BMW M3 affair at the top, with the German coupes locking out the top three positions. Gazoo Racing is still looking secure in the lead of SP8, ahead of a pair of Aston Martins: the #5 Zagato in second and #85 Vantage in third. Elsewhere, the Kremer Racing 911 has led the SP7 class, consisting mainly of Porsche Carrera Cup cars, for much of the race, and continued to do so as the clock rolled past 8am. By now, the rain had eased off and the track was beginning to dry a little, potentially handing the advantage to those on intermediate tyres. There's still a long way to go yet...

BMW loses the lead as N24 passes half distance

No. 3 Audi takes control at The Ring as Mercedes challenge fades