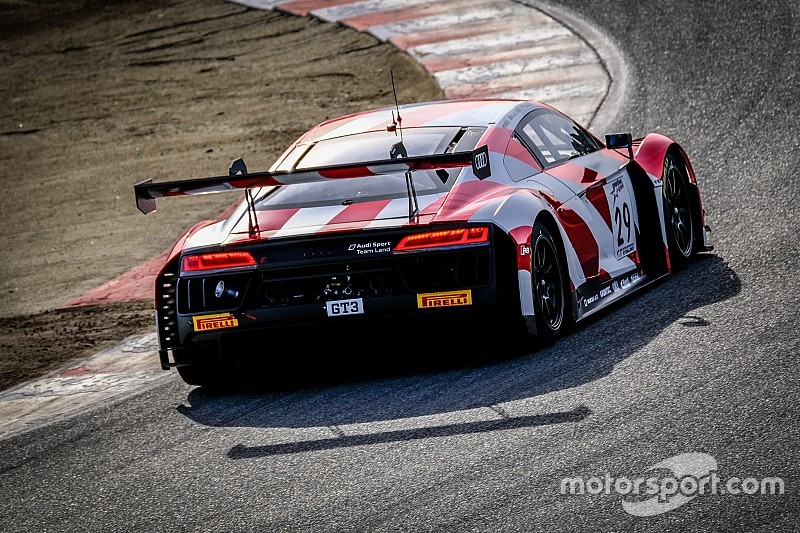 Van der Linde’s polesitting Audi ran away from the field early on, as WRT Audi driver Robin Frijns tried to put Raffaele Marciello’s Strakka Racing Mercedes AMG GT under pressure. Stuart Leonard in a third Audi fell away from this trio, and held up Vautier.

However, by the time Vautier and SunEnergy1 Mercedes teammate Luca Stolz found a way around Leonard, they were some 20sec off the lead after half an hour of racing, and they made no noticeable progress in that stint thereafter.

Marciello shook off Frijns and closed in on K. van der Linde so that he was less than a second in arrears after 40mins. Just before the first hour clicked off, Marciello moved his Mercedes into the lead, and rapidly pulled out a 2.5sec gap.

A full-course yellow for Mark Wilkins’ Hyundai i30 stranded in a gravel trap with broken front suspension gave a chance for everyone to pit under caution. The top four emerged in the same order, but now with Maxi Gotz in the lead Strakka Mercedes, Mies in the Land Audi, Dries Vanthoor in the WRT Audi and Maxi Buhk in the lead SunEnergy1 car.

However, the second SunEnergy car, now driven by Kenny Habul, had been displaced by both Alex Riberas’ WRT Audi and Rodrigo Baptista in the K-PAX Racing Bentley Continental.

Following the restart, the Land Audi had to serve a drive-through penalty for passing under yellow, breaking up an excellent all-Audi battle for second, and falling to 12th. That allowed Frederic Makowiecki in the Wright Motorsport Porsche 911 into the top five.

A second yellow was caused by Habul, who had just received a drive-through penalty for a pitlane infringement and now collided with the PPM Lamborghini Huracan, an incident that took them both off track and into the gravel.

Mies had made his way up to sixth in the Land Audi when he received a second drive-through penalty, this time for an unsafe release from the pits. However, by now somewhat off-strategy, following the next round of stops, Mies stayed out and went back into second behind another off-strategy car, the #8 Bentley of Andy Soucek.

Once Soucek stopped and handed over to Vincent Abril, the Bentley fell back to fifth, leaving Lewis Williamson in the lead over Maro Engel in the SunEnergy1 Mercedes, chased by the WRT Audi now driven by Markus Winkelhock, and Romain Dumas in the Wright 911.

However, on fresh tires, Abril got into third place before another full course caution due to a collision between a Mercedes, the Vital Speed Ferrari and the TCR-class #98 BHA Hyundai i30. With most of its rivals ducking into the pits, the recently pitted #8 Bentley was thus back into the lead.

With a little more than three hours to go, Lewis Williamson in the Strakka Mercedes took advantage of Maxime Soulet in the leading Bentley getting caught up in traffic, and dived down the inside into the Andretti Hairpin, but was ordered to give back the place having run off track to complete the pass. At the same time, Williamson had to keep his eyes on his mirrors, coming under pressure from Vautier in the SunEnergy car.

Finally Williamson retook the lead as Soulet ducked into the pits to hand over to Soucek, and the Strakka car pulled away from Vautier in traffic.

Following the Mercedes and Audi stops, Soucek was back into second but with 2hrs35min to go, the Bentley got trapped by GT4 traffic. Winkelhock and Mies zoomed around the outside of the British car exiting the Corkscrew and through the Rainey Curve, while Soucek clipped the GT4 BMW M4, sending it into the sandtrap.

The Bentley incurred a left-rear puncture, couldn’t turn into the pitlane and so had to complete a slow lap on three tires and one wheel rim. It then had to serve a drive-through for the collision.

The full-course yellow caused by the GMG Audi GT4 persuaded Land Audi to stop its GT3 model with 2h15m to go and install Haase, and all but the leading Strakka team followed suit by pitting next time by. Strakka took the hint and stopped Williamson from the lead the following lap and slotted Marciello into the cockpit. By then the car had dropped to seventh.

Haase now led Frijns ahead of Riberas in an Audi 1-2-3 with Buhk in the SunEnergy Mercedes in fourth ahead of Abril’s Bentley and Werner’s 911.

Marciello stormed into fourth place, past the car Buhk shares with Marciello’s title rival Vautier, yet almost immediately tried an impossible maneuver around the outside of Riberas’ Audi at Turn 5, and fell off the track and back down to fifth – two spots behind Buhk.

Dust and dirt in the air duct hurt the Strakka car’s power output thereafter and he gradually fell to six seconds behind Riberas and 20sec off Buhk.

The Audis made their final schedule stops as soon as they could – with 65mins of drivetime left – and Marciello did likewise, to clear dust off his windshield, inside and out. Buhk handed over to Engel.

Now Marciello had a clear shot at his title rival’s car, but he was 24sec off Engel and he kept falling further back. Two further pitstops to have debris cleared saw him fall to seventh at the checkers. S. van der Linde tumbled to fifth with a drive-through penalty, allowing Makowiecki to move the Wright Motorsports 911 into fourth in the closing quarter-hour.

Under the first yellow, however, the Aston ran out of fuel at Turn 6, and after the pitstops, the Panoz led with the TRG Porsche Cayman of Chris Bellomo in second, ahead of the GMG Audi now piloted by Jason Bell. The Ginetta would later need an electrical reset, while the Panoz had to get taken to the garage with a bad misfire.

That helped put GMG back at the front with Andrew Davis ahead of Staveley’s Ginetta chased by Spencer Pumpelly in the #66 TRG Cayman.

Through the middle part of the race, that Porsche, which Pumpelly shared with Derek DeBoer and Sean Gibbons, became the pre-eminent car although Matthew Fassnacht and Szymczak were also strong in the Mercedes, running just ahead of the Ginetta.

Sadly another lead runner, the GMG Audi with Sofronas lost all hope of class honors when it shed a rear wheel with 2h15m to go. The stops under yellow put Rearden Racing’s Vesko Kozarov/Jeff Kearl/Lara Tallman-driven Audi ahead of Ian Lacy in the Ginetta, DeBoer’s Cayman and Jeff Mosing in a Murillo Mercedes.

However, over the final couple of stints, Pumpelly moved the Cayman up into second place ahead of the Murillo Benz, which also displaced Staveley’s Ginetta to claim third, while the Rearden Audi hung on for class victory.