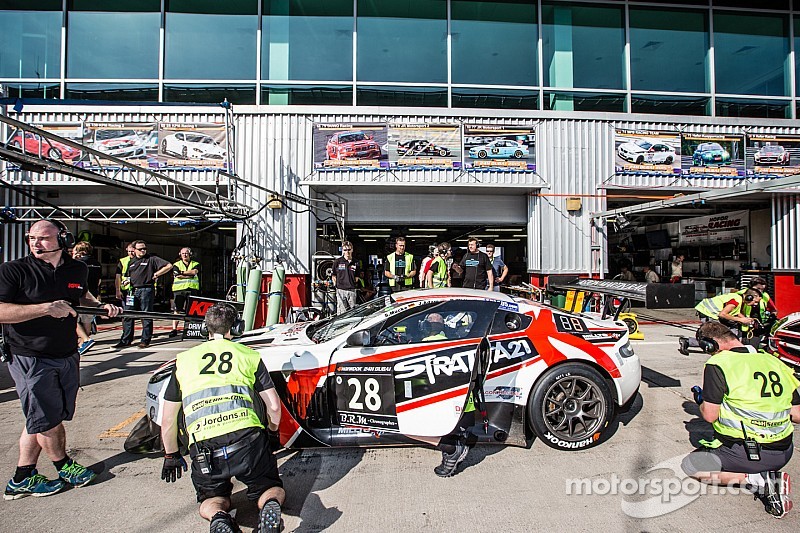 In its first race running the Milltek Sport-liveried Aston Martin V12 Vantage GT3, the team had no issues getting the car set-up for the two qualifying sessions, giving both the Am driver, White, and the professional drivers, Mücke and Adam, a car that they could get the most out of.

At KPM we have finished on the podium at every endurance race we have ever entered so we know our reliability is solid.

“Yeah, I was pretty pleased with that,” commented White. “If you look at the names above mine it’s an elite group of professional GT drivers, so I can’t complain at being up there with them in the top ten.”

For the second session, a thirty-minute opportunity for cars in the top three classes to better their times, Adam and Mücke took advantage of the traffic-less track to push the Vantage GT3 to its limit. After fifteen minutes each, the session ended and the team qualified seventh overall.

“As a team, we have had a lot of success in endurance racing,” commented team manager and owner Kevin Poole. “But, this race is very challenging and we’ve not run the Aston Martin before, so to qualify seventh is something we should be very pleased with.

“I’d secretly set myself a goal of top ten qualifying. It’s a long race so qualifying isn’t as important but it’s still something that you can use to benchmark yourself against others.”

“The new drivers all did great today,” commented Morcillo. “KPM Racing are very experienced at this – we finished second in class here last year and took podiums in Mugello 12 Hours, Barcelona 12 Hours and Hungary 12 Hours – so they are in the best place to learn. They have all listened and taken in all the advice and really shown their talent very early on in the week.”

“We’ll play the long game with the Golf,” added Poole. “Noone needs to be put under any unnecessary pressure. At KPM we have finished on the podium at every endurance race we have ever entered so we know our reliability is solid. Our fuel consumption is good and the guys have been great at tyre management. With the right strategy, we could add to our tally of top results.”

The 10th annual Dubai 24 Hours starts at 1400hrs local time tomorrow. Fans in the UK can watch the race on Motors TV from 09.30hrs GMT.