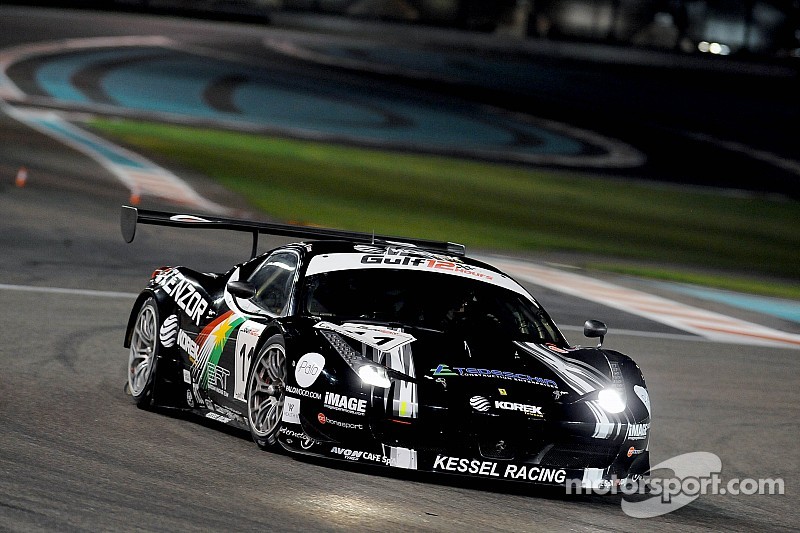 The Spaniard of Kurdish heritage made a sensation debut at Kessel Racing by setting the fastest lap in the Gulf 12 hours held at the Yas Marina Circuit. Finally, after changing the collector from the exhaust of his Ferrari 458 GT3 racing under Barzani Racing Team banner, Tutumlu finished 7th in Pro-Am class teaming up with Frezza and Gitlin.

The target was almost achieved. Isaac Tutumlu and Barzani Racing Team deprived of a podium finish in the Gulf 12 hours taking place in Abu Dhabi when they were battling for the class win on their debut with a Ferrari 458 GT3 entered by Switzerland´s Kessel Racing. In Friday´s qualifying session Tutumlu and his teammates Marco Frezza and Vadim Gitlin secured 2nd place in Pro-Am class and 6th overall.

In the first part of the Gulf 12 hours, the team functioned as smoothly as a Swiss watch and, after six hours, the Spaniard of Kurdish ancestry finished fifth overall, just one lap behind the leader, and second in Pro-Am class in rough weather conditions due to high temperatures in the Arab Emirate. Then in the second one, Russia´s Gitlin made the opening stint just before pitting for handing over to Tutumlu.

I posted the fastest lap for my team and Kessel Racing was delighted with my performance,

But on the following lap the Spaniard had to pit once again as a collector from the exhaust was noticed. Losing twenty-five minutes repairing this problem, Kessel Racing was left with no options for a podium finish. But it didn´t prevent Tutumlu from setting some impressive lap times, clocking the fastest lap for his team in the race and even Frezza was unable to beat him.

“It was a shame, because we were fighting for a podium finish in our class and, even, for an overall podium. The first part worked smoothly, and we didn´t make any mistake. Then Vadim made the opening stint because Marco and I would drive until the end. When I drove the car for the first time, I noticed something not working properly and after just one lap I had to pit again. Without these problems our results would have been much better than a seventh place.

Besides, I posted the fastest lap for my team and Kessel Racing was delighted with my performance, because they were not expecting I was so quick on my debut. It was such an amazing experience to team up with Marco and if we compete together in the future it would be great”, Tutumlu explains remarking that “I would like to thank Barzani Racing Team and my new sponsor, Korek Telecom, for their support because otherwise I couldn’t have raced here. Let´s see if we are able to compete again in 2015!”.

His next challenge takes place in the Dubai 24 hours and there the Kurdish driver will share a Glorax Racing Ferrari 458 GT3 with Andrey Alexanrovich, Rino Mastronardi, Dimitri Deverikos and Gabriele Lancieri.

Superb podium for Walkinshaw on endurance debut in Abu Dhabi