Isaac Tutumlu finishes on the rostrum in Dubai

Isaac Tutumlu has finished second in his class at the finish of the 24 hours of Dubai. 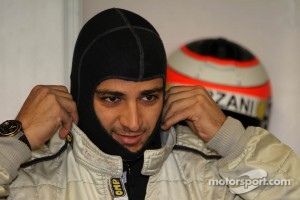 Isaac Tutumlu has finished second in his class at the finish of the 24 hours of Dubai, being 8th overall as well. Another outstanding result built on a superb performance coming from Tutumlu at night, as the Spanish driver of Kurdish roots drove faultless.

Barzani Racing Team driver took part in the race at the wheel of a Lamborghini Gallardo FL2 GT3 fielded by rhino´s Leipert Motorsport and teaming up with Oliver Webb, Jeroen Mul, Jan Stovicek and Yoshiharu Mori, a well-balanced team to tend towards the victory. Although the weekend didn´t start well, as an engine failure stopped them, Tutumlu stormed to pole position in qualifying, setting a lap of 2:05.006 in A6-Am class.

It needs to be highlighted that Tutumlu couldn´t go faster than 2:05 or, otherwise, his team would have been classified as a Pro team, an handicap having two gentlemen drivers on board. In the race the Lamborghini Gallardo was in top-six almost ever and, from the halfway point, they did set themselves up as potential winners. At the end, Tutumlu carried out an exceptional stint, passing two cars and gaining back thirty seconds on the leader. Finally, just a few seconds prevent Tutumlu from winning.

“I´m delighted to be here this weekend. Our start was not that positive when our new engine experienced problems in the private test, but fortunately we had an exchange engine. Three engineers from Lamborghini and our team worked hard to solve it and our work proved to be effective. We already knew Dubai was a very difficult race, so our second place in class and 8th overall, taking into consideration there were more than 80 cars on the grid, is an amazing result”, Tutumlu explained, feeling very fatigued.

So far, he points out “my unique previous experience was 24 hours of Barcelona some years ago. But this was much more demanding. I drove over eight hours, sleepless, and mostly at night. My last stint was quite good, passing two cars and just the need to save fuel prevented me to catch the leader. But anyway it was a great race and to be on the podium with my Kurdish flag was a memorable moment. My pole position was remarkable as well.

All my thanks go to Barzani family, Kurdistan and my sponsors. Now I´m looking forward to Daytona, for sure it will be another milestone moment of the season with plenty of excitement. This race will be a bigger challenge, as the PC car is more physically demanding”.