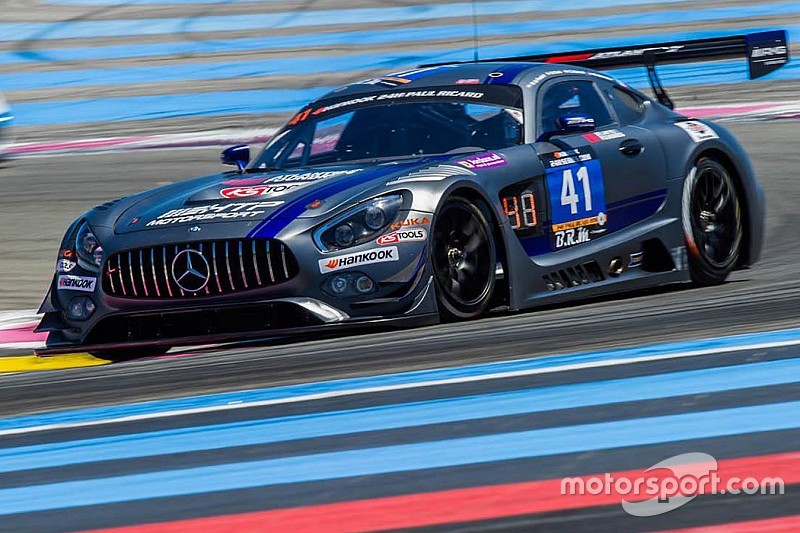 During the only Code 60 period so far, caused by oil on track, the Precote Herberth Motorsport Porsche 991 GT3 R (Alfred Renauer/Robert Renauer/Daniel Alleman/Ralf Bohn) did a fuel-only stop. That saving of time at the first pit stop brought Robert Renauer into the lead. The Porsche now runs on a different strategy rhythm than most of the other A6 cars.

Another leader of the start period was the Scuderia Praha Ferrari 458 Italia GT3 (#11, Jiri Pisarik/Josef Král/Matteo Mallucelli/Peter Kox). Ferrari regular Mallucelli was quickest in the first stint and made his way to the top from fifth on the grid.

The pole setter, Juan Cruz Alvarez in the Drivex Audi R8 LMS Ultra (#49, William Paul/Heino Bo Frederiksen/Zoltan Fekete/Dominik Fekere/Juan Cruz Alvarez), lost his lead in the first corner already after having locked up the wheels and going through the runoff area. The car also suffered from an ABS problem and now makes its way back to the front from 47th place.

In the SP3 class, the Nova Race Ginetta G55 GT4 (#284, Luca Magnoni/Roberto Gentili/Michael Simpson/Eric Vaissiere) defended their class pole position. So did the pole setters of the A3 and A2 classes. The Team Altran Peugeot 208 GTi of the current championship leaders (#208, Guillaume Roman/Stéphane Ventaja/Mathieu Sentis/Stéphane Christinelli) is on top of the A3 class and the presenza.eu Racing Team Renaut Clio Cup IV (#112, Luigi Stanco, Stefan Tanner, Stephan Jäggi, Christian Dijkhof, Michel Schaap ) tops the A2 class.