Zandvoort – “We have the potential to be in contention for victory,” German driver Maximilian Buhk announced prior to qualifying for the inaugural Hankook 12H ZANDVOORT. Sure enough, the 21-year old German put the No. 1 Hofor Racing Mercedes-Benz (#1, Michael Kroll/Roland Eggimann/Kenneth Heyer/Christiaan Frankenhout/Maximilian Buhk) on pole in qualifying with a fastest time of 1:39.998 minutes. 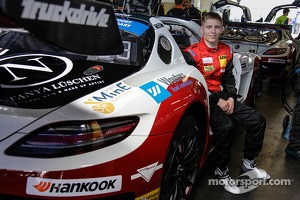 Initially, Hofor Racing’s No. 2 was on provisional pole with a lap time set by Michael Kroll, but then Maximilian Buhk came to the fore with a sequence of fast lap times in the No. 1 machine and emerged as the only driver to set a lap time of under 1:40 minutes. Frankenhout then took over the No. 2 car and improved the fastest lap time of that car, but still remained in second place.

The most thrilling battle was fought out in the D1 class, in which the top three cars set lap times all within four tenths of a second. Eventually, Wubbe Herlaar emerged as the fastest driver with the SVDP BMW 120 D (#75, Spencer Vanderpal/Wubbe Herlaar) with 1:57.607 minutes, followed by Johan van Loo in the Recy Racing Team BMW 120D (#72, Jan de Vocht/Johan van Loo/Wim Meulders) and Rik Breukers in the Red Camel-Tech Tics SEAT Leon 2.0 TDI (#73, Rik Breukers/Bart Ogink/Alex de Vries/Rob Quirijnen).

The Greatest Challenge’: Jörg Müller on the Nordschleife