The team also announced that it would enter a second McLaren MP4-12C GT3 in the Blancpain Endurance Series Spa 24 Hours.

Just before Christmas Hexis Racing announced the three drivers who will defend its colours in the five rounds of the Blancpain Endurance Series in 2013.

Alvaro Parente, Stef Dusseldorp and Alexander Sims will be gunning for outright victory and the Pro-Cup title, the top category in the championship.

The team also announced that it would enter a second McLaren MP4-12C GT3 in the Spa 24 Hours, the Blancpain’s blue riband event, to win the Pro-Am category. 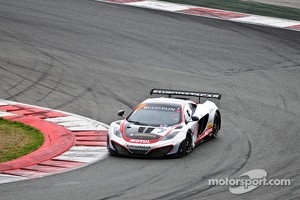 Its crew will combine the brilliance of platinum, the purity of gold, the flash of silver and the robustness of bronze! By putting together a line-up consisting of Olivier Panis, Côme Ledogar, Laurent Cazenave and Eric Debard, Hexis Racing team manager, Philippe Dumas, has created an ideal alloy between the different grades of drivers among the combinations allowed by the category regulations.

In long-distance events in the Blancpain Endurance Series, the Pro-Am category is the one with the highest number of starters. In the 2012 Spa 24 Hours it attracted 39 cars or almost 60% of the total number of entries.

The skills of the drivers are one of the most important factors to guarantee success, and this is why Dumas is particularly happy to be able to count on such a well-balanced second line-up.

“As it’s a long race the main aim is to finish. But the four drivers are among the best in their respective grades so we can aim for victory in Pro-Am and score a good result in the overall classification.

Olivier Panis, Laurent Cazenave and Eric Debard are part of our team in the French FFSA GT Championship. Côme Ledogar will be making his GT debut in a McLaren with Hexis Racing in the Spa 24 Hours with a former F1 driver as team leader. Not a bad way to start!”

The 65th Spa 24 Hours will take place on 27-28 July. With six months to go the drivers, some of whom are already familiar with the race while for others it will be their maiden outing, are already champing at the bit to race in this event like no other in the world.

Eric Debard (Grade Bronze driver, a member of the Hexis team in the GT Tour-FFSA GT French Championship, 3rd start in the Spa 24 Hours in 2013): “I’ve raced in the last two Spa 24 Hours and every year I circle the date in my diary! In 2011, our Mercedes-Benz AMG retired during the night.

Last year in the Ferrari we finished on the third step of the podium in Pro-Am and eighth overall in the general classification. What really struck me in 2012 was the violence of the rain, and sometimes I asked myself what I was doing at the wheel of a racing car in such conditions!

A 24-hour race is always a red-letter event from an emotional point of view, especially when the car takes the chequered flag. You have to be humble, not overdo it, keep something in reserve and then around midday see where you are.”

Laurent Cazenave (Grade Silver driver, a member of the Hexis team in the GT Tour-FFSA GT French Championship, 1st start in the Spa 24 Hours in 2013): “I Know the Spa 24 hours through TV and the media! It’s one of the greatest GT races in the world with only GT cars at the start: it’s also a great human adventure and a huge sporting challenge.

No matter what rivals you’re up against, this type of race is always difficult to manage from the human point of view as well as the mechanical aspect and the race strategy.

A raft of different parameters has to be taken into account and you can never be sure of mastering them all. Côme and I are both rookies and we want to avail ourselves of the experience of the other two, in particular that of Olivier, our team leader.

In 2011, Hexis Racing proved that it could do miracles with the Aston Martins in which people no longer believed. The team will be tightly-knit as it’s based on the notion of friendship between all its members.”

Côme Ledogar (Grade Gold driver, Hexis Racing Junior driver, 1st start in the Spa 24 Hours in 2013): “It’ll be the greatest race of my life! I’ve got every confidence in the squad, which is multi-talented, and my team-mates are reliable drivers.

I’m going to try and glean as much of their experience as I can. I don’t know the event or the category but the Spa circuit no longer holds any secrets for me.

I’ve raced there four years running in single-seaters and I set pole twice in Formula BMW beating Robin Frijns in 2010.

I’ll go to as many of the opening races in the Blancpain Series as I can to soak up the ambience in the team and that of the championship.

In my opinion, Hexis Racing is the best team in the world, and I’m really happy to be making my GT debut with Philippe Dumas whom I’ve been very close to since I began racing.

He’s taught me a lot as a mentor so that will make it all the more interesting to be driving for his team. It’s a dream come true and a fitting reward after I filled the runner-up spot in the 2012 Porsche Matmut Carrera Cup.”

Olivier Panis (Grade Platinium driver, a member of the Hexis team in the GT Tour-FFSA GT French Championship, 3rd start in the Spa 24 Hours in 2013): “I’ve got very good memories of my two outings in the Spa 24 Hours. In 2011, I was with my Le Mans team-mate, Nico Lapierre.

The following year’s race resulted in a podium finish with Eric Debard, Morgan Moullin-Traffort and Fabien Barthez, so I’m really looking forward to going back there with two drivers I know well, plus young Côme Ledogar for whom it will certainly be a great experience.

Last year, the night was particularly tricky because it was raining cats and dogs! At the end of my stint I went to catch some sleep but I kept the team’s radio on.

I wasn’t asleep when I heard, “it’s raining too much, go and wake up Olivier!’ I got dressed and got back behind the wheel. It was absolutely awesome out on the track, but that’s what the Spa 24-Hours race is all about with its unique weather conditions that always spring a few surprises. You’ve got to be ready for everything.”