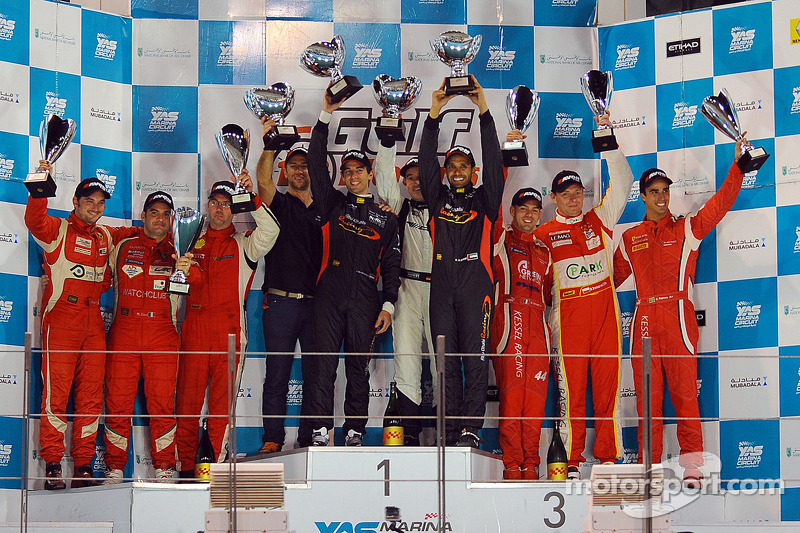 Jeroen Bleekemolen, Bernd Schneider and Khaled Al Qubaisi took the victory on the Yas Marina Circuit by one lap over AF Corse Ferrari.

The third Gulf 12-Hours endurance classic was the icing on the cake for Team Abu Dhabi by Black Falcon Racing which added victory at the Yas Marina Circuit to its clean sweep of the 2013 endurance racing calendar.

Winning by just one lap after completing 308 laps of the 5.55km Yas Marina GP circuit, the team's drivers Jeroen Bleekemolen, Bernd Schneider and Khaled Al Qubaisi were the class act of Abu Dhabi setting pole position and leading for much of the race.

Bleekemolen claimed pole so started the race alongside the number 11 Kessel Racing Ferrari 458 GT3 being piloted by Daniel Zampieri, Michael Broniszewski and Cesar Ramos on the front row.

A safety car intervention during the first six-hour stage allowed reigning 12-Hour champs AF Corse to take advantage of a pitstop before their rivals which gave the Ferrari team an edge over the Black Falcon Mercedes and take the lead. From there, AF Corse's drivers Steve Wyatt, Michele Rugolo and Marco Cioci continued in the lead and took the chequered flag at the end of the first six hours from Black Falcon by 58 seconds.

The unique nature of the 12-Hours comprises a race broken into two six-hour runs and at the start of the second part held under twilight conditions on a cooling track, Black Falcon got the jump over AF Corse on the restart and were never headed for the remaining six hours of racing, taking a clear 1'40" victory from AF Corse who finished in second place.

AF Corse tried in vain to repeat their Gulf 12 Hour wins in 2011 and 2012 but an electrical issue in the final stint combined with a slow puncture early in Race Part 2 meant that it wasn't to be for 2013.

"This has been an unbelievable year which started with victory in the Dubai 24-Hour then we went on to win two more 24-hour races at the Nürburgring and Spa, a 12-Hour race in Australia and tonight we cap it with a win in Abu Dhabi," Team Abu Dhabi by Black Falcon's Bernd Schneider said. "It's full credit to my fellow drivers Jeroen and Khaled, they did an amazing job" he added.

Finishing just off the podium despite a race-long tussle with the number 11 Kessel Racing Ferrari, the M-Sport Bentley team could not have hoped for a better debut of their new race team and the new Continental GT3.

The big Bentley was consistently mixing it with the top 5 contenders thanks to a stunning performance by team drivers Guy Smith, Steven Kane and Andy Meyrick. During the closing stages of the enduro, the Continental GT and the Ferrari swapped places and remained within just a few tenths of a second until the final pitstop when the Ferrari edged clear and eventually finished one lap up on the Bentley which slowed down in the final two laps not to exacerbate some issue that emerged on the front axle.

In the competitive GTX class, a battle ensued in the early laps between the two Nova Race Ginetta G50 GT4s. Over the first few hours, the distinctive orange-coloured cars traded places and sat bumper-to-bumper until the second car, number 92 was called into the pits with mechanical troubles.

This allowed the number 91 Nova Race Ginetta to build a buffer and managed to sit in the top 10 outright for most of the 12-hours. Car 91 driven by Tiziano Cappelletti, Giampiero Cristoni, Tommy Lindroth and Matteo Cressoni eventually finished 10th outright, taking the class win from Optimum Motorsport who were 12th outright and the number 90 Nova Race entry in position 13, three laps adrift of Optimum Racing.

The prototype CN category featured four cars in the entry list but only two would see the chequered flag in what was a tough day in the office for the diminutive, open cockpit sports prototype racers.

BF Motorsport looked promising early on but spent much of its time in the garage, however it eventually fought back to claim the third step on the podium.

The number 95 Avelon Formula Wolf brought out the only safety car of the race, three and half hours into the first part just before 1pm when it spun at the final turn 21 and slid into the pit wall.

The car eventually made it back out on to the track but not after it received a technical black flag soon after to fix some damaged bodywork.

Driven by Guglielmo Belotti, Jesüs Fuster and Alessandro Tonoli, the 95 car eventually finished 15th outright which was good enough to claim the class win from its sister car, the number 96 Avelon Formula Wolf in 16th place while BF Motorsport rounded out the field in 21st place outright.