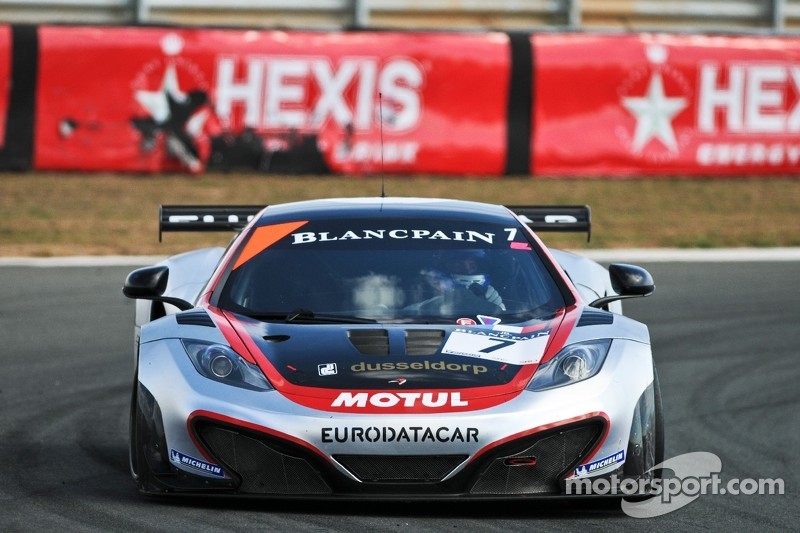 The third round of the Blancpain Endurance Series will be held in Le Castellet, France. The three-hour race will no doubt be action-packed.

The Blancpain Endurance Series gathers at the Circuit Paul Ricard this weekend for the third round of an increasingly exciting 2013 season. Once again another bumper grid of 62 GT3 cars is set to do battle in the South of France for the final three-hour race of the season. The remaining two races contributing to the Blancpain Endurance Series will be the TOTAL 24 Hours of Spa on 27-28 July and the Blancpain1000 event at Nurburgring on September 22.

PRO class – Will the French come to the fore?

It is Ferrari 1 Aston Martin 1 in terms of race victories so far this season with Kessel Racing and Aston Martin Racing proving that home advantage for these famous brands counts for something. Taking this in to account, a French entrant could come to the fore this weekend with several candidates likely to stake their claim.

Hexis Racing, based close by at Ledenon, has by their high standards endured a tough start to the season. However, the Phillipe Dumas managed team are as determined as ever to return to the winners circle this weekend with their stellar driver line-up of drivers Alvaro Parente, Stef Dusseldorp and Alexander Sims.

“Our aim is to be on the podium at Paul Ricard and then to go on and win the Total 24 Hours of Spa,” said a confident Dumas. “Maybe our expectations are a bit too high, but we are a great team with great drivers, and our McLaren MP4-12C that is getting more reliable and competitive. So we have to fight for the victory and nothing else!”

The ART Grand Prix team will be looking to recover from a tough Silverstone weekend with their customary fighting spirit. After taking an impressive second place at Monza in the first round, Andy Soucek, Antoine Leclerc and Mike Parisy will be fired up to re-invigorate their title challenge with the distinctive white, red and black McLaren MP4-12.

Also likely to mount serious challenges on their home turf will be SMG Challenge with their regular Porsche 997 GT3R for Eric Clement, Olivier Pla and Nicolas Armindo. SMG is led by the irrepressible Phillipe Gache and are the only all-French team in the PRO class at Ricard and could be a real threat for a podium finish.

Always there at the front of the field is the three-car squad of Belgian Audi Club Team WRT. Last year’s winners of the Paul Ricard race will be keen to defend their crown in the South of France. With Stephane Ortelli racing close to his hometown of Hyères, he will be confident of toppling the Kessel Racing trio of Daniel Zampieri, Davide Rigon and Cesar Ramos from the top of the table by the end of Sunday afternoon.

Kessel Racing enter a second Ferrari 458 Italia in the PRO class with Giacomo Petrobelli and Francesco Castellacci moving across from the Vita4one Italia team. Andrea Ceccato joins them to make it an all Italian line-up in the Swiss entered Ferrari.

The HTP Motorsport Mercedes SLS AMG gets an outing with the impressive Israeli driver, Alon Day and his FIA GT Series partner, Maximilian Buhk. They in turn are joined by German, Luca Ludwig, who last raced in the series at the Nürburgring last season with Phoenix Racing.

The Team Marc VDS line-up has changed slightly for Paul Ricard as Nick Catsburg is replaced by a very familiar face – Andrea Piccini. The reigning TOTAL 24 HOURS OF SPA winner steps in to the breach after Catsburg broke his collarbone while mountain biking recently.

So far in the intense and varied PRO-Am class it has been a tale of three different manufacturers of GT3 cars fighting it out at the top of the points table. The pace and momentum has definitely been with the impressive Nissan GT Academy Team RJN entry of Alex Buncombe and Lucas Ordonez. Joined at Silverstone by new ‘gamer to racer’ recruit – Peter Pyzera, they destroyed their PRO-AM competition winning the class by a full lap and also leading the race outright for the first 25 minutes. Buncombe has been the star of the show so far this season and the amiable Brit will be aiming for another leading performance in the impeccably prepared Nissan GT3 R NISMO at Paul Ricard.

It could not be tighter at the top of the points table as Nissan GT Academy Team RJN shares the same points as AF Corse and TDS Racing after two rounds. Reigning champions AF Corse had a troubled Silverstone race last time out, but with Andrea Bertolini in the Ferrari 458 Italia, they will be aiming to re-claim the title lead this weekend and defend the 2012 driver’s title for Niek Hommerson and Louis Machiels.

After a tough Silverstone race where they were taken out of contention by another car, the Blancpain Racing Lamborghini Gallardo GT3 FL II of President and CEO of Blancpain, Marc A. Hayek and team mate Peter Kox will be aiming to bounce back strongly this weekend at Paul Ricard.

TDS Racing’s BMW Z4 has had a sublime start to the 2013 campaign with two podium visits for the excellent duo of Henry Hassid and Ludovic Badey. Their partnership created one of the drives of the season so far when they came from the back of the field to take 3rd in the PRO-AM class at Silverstone earlier this month and they are always one to watch.

There are so many more potential winners in the huge entry at Paul Ricard. Black Falcon is always a threat with their brace of Mercedes SLS AMGs, especially as they added the talented Duncan Tappy to their driver strength at Silverstone. The PRO GT by Almeras and the Haribo Racing Porsche 997s are also sure to be threats to the title leaders on the long straights and challenging quick corners of the Circuit Paul Ricard.

Boutsen-Ginion will be fighting back from a frustrating weekend at Silverstone which saw their weekend blighted by accidents. Proudly racing with the ‘Baku World Challenge Powered by Aztexnikat’ logos on their cars, the ultra-professional Belgian team will have high hopes to turn around their fortunes after some very promising lap times during the official test back in March.

Always sure to grab the headlines, just like he used to grab opposing defenders, will be Fabien Barthez who is entered in a third SOFREV ASAP Ferrari 458 Italia, along with regular teammates Gérard Tonelli and Morgan Moullin Traffort. The three of them will be using Paul Ricard as a warm up for the TOTAL 24 HOURS OF SPA next month.

Fresh from a superb performance at the Silverstone round, the ARC Bratislava Porsche 997 GT3 R squad are on the crest of a wave after hitting a rich vein of form last time out. Ahmad Al Harthy, Oman’s only internationally recognised racing driver gained huge recognition for a heroic double-stint performance on his adopted home track. Along with his Slovakian team mate Miro Konopka, Al Harthy is now second in the points standings and with more performances like those at Silverstone, the ARC Bratislava team are in with a real chance of mounting a title challenge.

Heading the way in the Gentlemen’s Trophy points is the SOFREV ASP team. The two Jean-Luc’s of Blanchemain and Beaubelique are paired with the experienced and pacey Patrice Goueslard and a first race win at Monza, followed by a 4th at Silverstone mean they have an eight point advantage over ARC Bratislava’s pairing.

With AF Corse and Sport Garage entering their usual squad of two Ferrari 458 Italia’s apiece, there will be plenty of competition in the growing Gentlemen’s Trophy. Sainteloc Racing too will be a threat as Marc Sourd, Claude-Yves Gosselin and Pierre Hirschi look to re-kindle some 2012 class winning title form for the French team.

M-Tech’s Argentinian flavoured Ferrari 458 Italia has a new face in the team this weekend as Jake Rattenbury joins up with regular drivers Diego Menendez and Fabian Taraborelli.

MRS will enter a second McLaren MP4-12C at Paul Ricard to double-up their attack. The Venezualan trio of Pablo Paladino, Gaetano Ardagna Perez and Paolo Andreasi make the long trip from South America. Paladino and Andreasi shared a Kessel Racing Ferrari 458 Italia at the 2012 TOTAL 24 HOURS OF SPA, while Ardagna Perez has recent experience in the FIA GT3 European Championship, having won at Zolder in 2012.

Antoine Leclerc, ART Grand Prix McLaren MP4-12C (PRO) “We did a great test at Paul Ricard in March; the performance in the car was there for us. So, we arrive on a track that we know and in a confident mood. Our objective is definitely to be back at the front of the field, and if everybody does a good job, we are going to be on the podium!”

Franck Perera, PRO GT by Almeras Porsche 997 GT3 (PRO-AM) I think this track suits the Porsche nicely, but not only the Porsche! For instance, I think Ferrari will be quite good at Ricard too. One of the big qualities of this series is that we often find all the manufacturers represented at the front. Like at Silverstone, when there were five different brands on the first three rows of the grid! After the good results during the test days and a second position in GT Open last winter on this track, I can say that everyone at PRO GT by Almeras is really looking forward to the event.”

Frédéric Vervisch, Boutsen-Ginion McLaren MP4-12C (PRO-AM) “I just hope we can drive the whole weekend! I also hope we will be able to gain some good speed but I don’t expect to be as fast as we were during the pre-season tests because you don’t know what the others were up to. We will do our best, we will do the maximum we can and I hope we can fight at the front, but not in the pack like in Monza.

“I also think that the weather will be quite hot, so it will be really different from the test days in terms of conditions and tyre-wear. Anyway, I am a positive person so I think we will do a good job at Paul Ricard.”

Rob Barff, Von Ryan McLaren MP4-12C (PRO-AM) “I am looking forward to the weekend because I think the Von Ryan McLaren will be in good shape. Jordan (Groger) and Leon (Price) both had good solid races at Silverstone and we can use a lot of that momentum to achieve another positive result for the team.”

Pierre Hirschi, Sainteloc Racing Audi R8 LMS ultra (Gentlemen Trophy) “We really hope that we will be able to get as close as possible to the podium. Obviously it will also depend on our third teammate that we will have. However, we have to be realistic, the main handicap of the Audi is power, and Paul Ricard is a demanding track for the engine, so it might be a bit difficult for us.”

Ahmad Al Harthy, ARC Bratislava Porsche 997 GT3 (Gentlemen Trophy) “We are obviously on a high from Silverstone but we have to start afresh in a way for this weekend. It is a new challenge but I think we can be strong again because our car is good on the straights. It should be another great race as the competition is so fierce in the Gentlemen Trophy class.”