Leading British GT racing team and Ferrari specialists MTECH will start their Ferrari 458 Italia from midfield for the Total 24 Hour race of Spa that begins in Belgium tomorrow at 1500 UK time (1600 local). 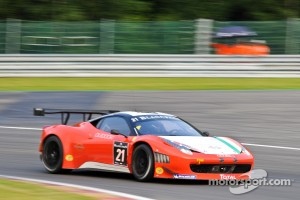 MTECH are running an all-new Ferrari 458 Italia at Spa, the newly acquired car being in full ʻenduranceʼ specification as opposed to the ʻsprint raceʼ specification car the team has campaigned so far this season in both the Blancpain series and also the Avon Tyres British GT Championship.

Regular drivers Duncan Cameron (Chester, England), Matt Griffin (Cork, Ireland) and team owner Mike Edmonds (Tamworth, England) have been joined for the Spa classic by 34 year-old Italian Niki Cadei who with Matt Griffin finished 9th overall in the race last year in an AF Corse-run Ferrari. Matt Griffin set the Qualifying time for the team which would surely have been quicker still had both of his intended flying laps not been interrupted by red flag session stopping incidents. As it was Griffinʼs best time was good enough to secure a P30 grid slot in the 65-car entry, his time being just 1.5s shy of the pole position time set by a BMW Z4 on Spa Francorchamps 4.35 mile-long Grand Prix circuit.

Matt Griffin: “ We had a few small issues in the Qualifying session last night, but the good news is that everything was ultimately sorted. More good news too is that the Ferrari 458 is very good at in the dark. I think we ran P16 in the night session without really going for a quick time.”

Les Jones, Team Manager: “ Apart from a traction control unit failure late-on which cost us about 20 minutes of the final session the new car has run very well ʻout of the boxʼ. The main task was to get the handling right and all three drivers qualified to race. After an initial struggle to dial out some understeer we achieved the aim comfortably.

“Weʼll take the P30 grid start. The race is one very much of endurance and we know that we are quicker around Spa than the qualifying time suggests. Matt was very unlucky on both of his intended Qualifying laps with red flags stopping the session. By the time everyone was ready to run again heʼd lost the best of his tyres.”

The Total 24 Hour race of Spa, nominally the fourth round of the 2012 Blancpain Endurance Series will be shown live on television on the Motors TV Channel from 1430 on Saturday 28th July

Racing into the night at Le Castellet