We are only less than a few days away from the return of MOMO to a full time racing program in the American Le Mans Series with MOMO NGT Motorsport. MOMO is pleased to share the original story of the career of its founder, Gianpiero Moretti. Gianpiero Moretti, the man who helped define the term "gentleman racer," passed away in January at the age of 71, in Milan, Italy. Part 3 of Paolo D’Alessio’s original 2011 story is published again here, with his kind permission: 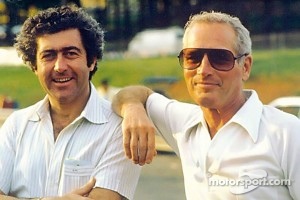 Apart from being a great gentleman driver and a wise businessman, Moretti is also a good public relations officer for himself, always takes advantage of every occasion to obtain great advertising at low cost. His nosh-ups of spaghetti become memorable occasions and the people present in the Momo team tent at these occasions are people who count, from the most important journalists, photographers and Americans to great champions like Mario Andretti and Hollywood legends like Gene Hackman or Paul Newman with whom Moretti became close friends.

Momo felt that friendships in those days were more genuine, commenting, “In those days nothing was planned and there were no round table meetings. Everything used to happen naturally. If Paul Newman sat eating spaghetti in your motor home (on one occasion the blue eyed diva defined Moretti as “a cook worthy of the Waldorf Astoria”) it was because it was a sure pleasure for him and not only because he was invited or worse yet paid by a sponsor to do so. Those were other times….less technology, less professionalism but with an environment that was definitely more ‘real’ so to speak.”

The races in the US used to take up a large part of Moretti’s time, but now and again the driver from Milan, with the Swiss passport, used to remember his origin and return to the old continent to race. In 1979 he participated at the Giro Automobilistico d’Italia (a sort of rally where the speed trials were held on various tracks in Italy) behind the wheel of his Porsche 935.

After having dominated Formula 1 with Ferrari, Fiat also wanted to put their seal on what was known at the time as “Mille Miglia” (thousand miles) and in order to increase the chances of success, they entrusted their Lancia Beta Montecarlo Turbos to Gilles Villenueve and Riccardo Patrese, assisted by rally racing drivers Markku Alen and Walter Rohrl.

As forecast the Lancia Gran Turismos of Chivasso took first and second place in the ranking while the Porsche of Moretti – Schon took third place. Right from the first stages of the race doubts started spreading about whether the two Lancia cars broke the rules by taking the highway to avoid arriving late for a time check. 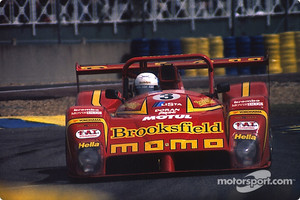 Moretti thought long and hard before deciding to file a protest, saying, “We had the proof and I told Cesare Fiorio. For our private team it would have been enough to rank second between the two official Lancia cars. I spoke to Cesare Fiorio, sports director of the Fiat Group, about it but he didn’t even want to take my offer into consideration. So, after the triumphant arrival of the two Beta Montecarlo in Turin and the celebrations in Piazza San Carlo, we lodged a formal complaint against them. In the heart of the night we were declared winners of the Giro while the two cars of the Fiat Group were disqualified.”

Moretti continued, “It goes without saying that for some people this was not good news at all and from that moment on and for a long time the name Momo became taboo for the Fiat Group. And as if that wasn’t enough, in that same period we were also at odds with Ferrari or to put it better, with Enzo Ferrari, who still hadn’t forgiven us for having used pictures of the “traitor” Niki Lauda, who had abandoned Maranello in 1977 to go to Brabham, to advertise some of our steering wheels. In fact, Ferrari found it difficult to cope with this betrayal and one day he decided to cancel the supply of steering wheels that were ordered for Formula 1, only to call us back a few years later because our business rivals didn’t meet his expectations.”

So was this whole episode behind us them? Not a chance: a year later, during the 1980 Giro D’Italia , something happened that Gianpiero Moretti suspects was a case of revenge served cold.

“On the eve of the last stage we had a good chance of repeating the success of 1979, but there in Mugello (a race track near Florence, Italy) our engine cut suddenly without any warning sign. Of course this is something that can happen during a race but unfortunately after dismantling the engine we found an abnormal amount of water inside it. The possibility that our car had been tampered with was more than just a suspicion,” said Moretti. Anyone else would have cursed at this adversity but not the much envied Moretti who left the Giro D’Italia accompanied by his girlfriend at the time, the statuesque Dorothy, who was declared ‘Girl of the Year’ by Penthouse magazine.

How can you not envy someone whose closest friends are Paul Newman, Ermerson Fittipaldi and Mario Andretti and is in a relationship with a self-confident American model? Many have asked themselves this question but not Mr. Momo who handles all of this so naturally and even after that episode he still continued his travelling back and forth between Europe and the USA like a modern migrant worker, all work and racing. 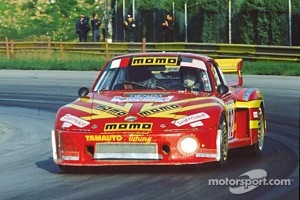 In 1984 he again wanted to add a touch of Italian to his participation with IMSA and so he turned to the engineer Giorgio Stirano, owner of Alba, to use one of Stirano’s cars in the IMSA series. The 8-cylinder Ford Cosworth that pushed the small Alba was clearly less powerful than many American engines around at the time but Stirano’s two seater was more sophisticated than the sport made in America and so before you knew it everyone wanted to learn about this car’s aerodynamics and especially the chassis made of composite.

The gentleman driver Gianpiero Moretti’s team thus became a reference model for all the categories. There was even a moment in which Mike Kranefuss, the big boss of Ford racing, thought of transforming the Turinese workshop into a sort of official Ford team. Moretti bitterly recalls, “Kranefuss was in love with the project but in the end nothing came of the idea…and certainly not because of the value of the car which in 1983 won the Group C Junior World Championship, but because of ‘political’ reasons you could say.”

The Alba was an excellent car but to aim higher a more powerful engine was needed and it was for this reason that at the age of 50, the gentleman driver from Milan was forced to go back to his old love, Porsche, converting to the Group C 956/962.

Bob Bondurant goes back to Watkins Glen, 47 years after it tried to kill him