The team won the race at Circuit Park Zandvoort after an exciting battle in the opening hours with the No. 9 Scuderia Praha Ferrari 458 GT3 Italia.

ZANDVOORT – The first edition of the Hankook 12H ZANDVOORT finished with a fantastic victory for the No. 33 Car Collection Motorsport Mercedes-Benz SLS AMG GT3, driven by Peter Schmidt, Christian Bracke, Mirko Schultis and local hero Renger van der Zande. The team won the race at Circuit Park Zandvoort after an exciting battle in the opening hours with the No. 9 Scuderia Praha Ferrari 458 GT3 Italia.

After three fantastic opening hours of the race on Friday, the Hankook 12H ZANDVOORT resumed on Saturday with a very interesting GT fight in the A6 class. Where it was first the No. 2 Hofor Racing Mercedes-Benz SLS AMG GT3 (Michael Kroll/Roland Eggimann/Kenneth Heyer/Christiaan Frankenhout/Maximilian Buhk) leading the race, it was the No. 9 Scuderia Praha Ferrari 458 GT3 (Jiri Pisarik/Jaromir Jirik/Peter Kox) that took over the lead in the fifth hour. But it didn’t take long for the No. 33 Car Collection Motorsport Mercedes-Benz SLS AMG GT3 (Peter Schmidt/Christian Bracke/Renger van der Zande/Mirko Schultis) to charge to the first position in the sixth hour. 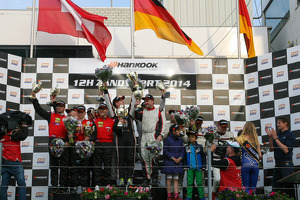 Hankook 12H Zandvoort: Overall Podium at
In the ninth hour the Scuderia Praha Ferrari managed to fight back in the lead, thanks to a successful pit stop strategy. Unfortunately, a few laps later, the Ferrari was involved in an incident, which forced the team to retire from the race. After the retirement, the No. 33 Car Collection Motorsport Mercedes-Benz SLS took over the lead, which it kept until the chequered flag. The No. 2 Hofor Racing Mercedes-Benz SLS AMG GT3 finished in second place, just before the No. 3 Car Collection Motorsport Mercedes-Benz SLS AMG GT3 (Johannes Dr. Kirchhoff/Gustav Edelhoff/Elmar Grimm).

In the competitive SP2 class it was the GC Automobile Factory GC 10 V8 (#88 Lionel Amrouche/Franck Leone Provost/Jeremy Reymond) that was in the lead for a long time. But with a good stint in the eighth hour, the Besaplast Racing Team Audi TTRS (#86 Franjo Kovac/Martin Tschornia/Frederik Lestrup) raced into the first spot of the class and took the win. The Besaplast drivers were accompanied on the podium by a large delegation of very happy drivers of MARC Cars Australia, scoring their first ever European podium with the second place for the No. 93 (Jake Camilleri/Malcolm Niall/Brett Niall) and third place for the No. 91 (Keith Kassulke/James Kaye/Kim Holmgaard).

In the A3T class, victory was celebrated by the Bas Koeten Racing 2 SEAT Léon Supercopa (#42 Martin v.d. Berge/Henk Haane/Monny Krant), while the battle in the D1 diesel class was won by the SVDP Racing BMW 120d (#75, Spencer Vanderpal/Wubbe Herlaar) with a fantastic gap of 35 laps on the rest of the competition.

The next race of the 24H SERIES Powered by Hankook will be the 24H BARCELONA at Circuit de Barcelona-Catalunya on 5, 6 and 7 September 2014.

More BMW Z4 GT3s in action in the Ardennes