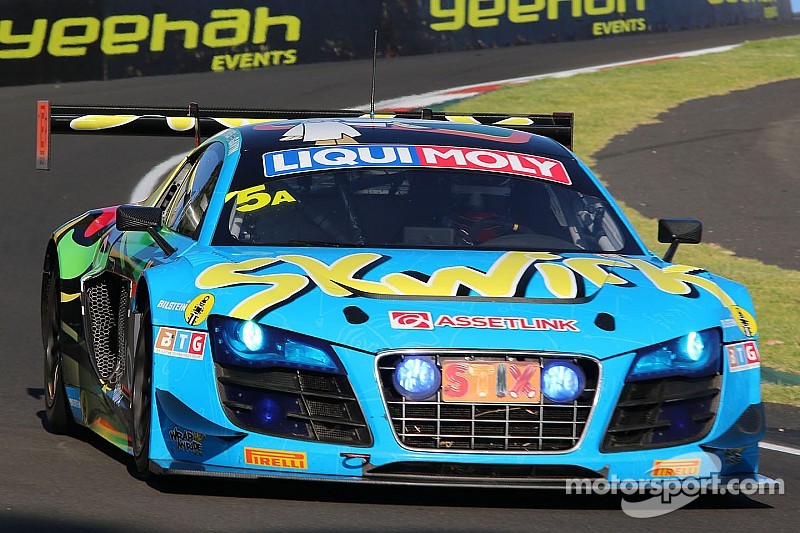 Oliver Gavin’s love affair with Australian motorsport remains undiminished after a stout bid for glory on the legendary Mount Panorama Circuit ended prematurely in the wall.

The Briton’s jaunt in the 2014 Australian V8 Supercars Pirtek Endurance Cup yielded a podium finish in the Bathurst 1000 race, making Gavin the first international driver to scale the V8 podium in more than 25 years.

This remarkable feat was the catalyst for Gavin’s return to ‘The Mountain’, where he would attempt to emulate his V8 Supercars success and scale the winners’ rostrum in the world-renowned Bathurst 12 Hour GT race, this time with a state-of-the-art Skwirk.com.au Audi R8 LMS Ultra MPC, owned and co-driven by capable amateur racer, Rod Salmon, and Australian ace, Nathan Antunes.

Gavin contested the once-around-the-clock enduro for the second time, having led last year’s race in a Class B Audi R8, and fully expected to have all the ingredients necessary to mount a serious challenge for a podium finish, or even victory.

Mount Panorama is unforgiving and the quality of the field makes it a 12-hour sprint.

The Skwirk-liveried Audi was a top-ten stalwart during free practice, mixing it with the manufacturer-supported efforts of Bentley, Nissan and Aston Martin, as well as other top marques like Ferrari and Lamborghini.

Sadly, the wrong tyre, traffic and successive red flags all added up to a very frustrating qualifying session for Gavin and teammates, who were unable to better 23rd on the grid.

However, Gavin felt he had some unfinished business ‘down under’ after retiring from last year’s Bathurst 12 Hour and, well aware that the race was never going to be won in qualifying, the Briton remained confident of challenging for victory in the once-around-the-clock enduro.

The cars took the start as the sun rose over New South Wales and it was a spectacular sight as, headlights ablaze, the bumper field of GT cars clambered over ‘The Mountain’ for the first time in the dim early morning light.

Gavin pushed on and drove in a committed fashion to drag the #5 machine into the top ten by the completion of his first double stint.

After an early caution period, Gavin locked horns with fellow Briton and former Le Mans 24 Hours winner, Guy Smith, in an all-new Bentley Continental GT. The pair remained engaged in a tense tussle for fourth overall as the sun rose along with the temperatures before pitting for the first round of driver changes.

Following a superb effort and with the disappointment of qualifying well and truly behind him, Gavin handed the reins to team owner and competitive amateur driver, Salmon – himself a former Bathurst winner.

The order continued shifting as the 12 hours ticked on and the Swkwirk Racing team remained in contention until the fourth hour when Bathurst debutant and former single-seater Champion, Antunes, began his opening stint.

After a protracted Safety Car period – one of 20 that would blight the race – Antunes set after the leaders in a bid to improve track position. However, unfortunate contact with the unforgiving concrete wall at The Cutting resulted in terminal damage to the Skwirk-backed Audi R8 LMS Ultra’s axle, chassis and gearbox.

Gavin was philosophical in the aftermath of the incident, which forced his team into retirement after approximately 4h30m had elapsed, saying: “I love coming to Bathurst, as it’s a unique and unbelievable racetrack and the experience of working with Rod (Salmon) and the professional Skwirk Racing team has really made the journey worthwhile. After the disappointment of qualifying, we had to pick ourselves up again and demonstrate what the Skwirk.com.au-backed Audi could deliver and I think we did that admirably as a team and, with good fortune, I believe we could have got a strong result.

“Nathan is devastated that the race ended in the way it did, but Mount Panorama is unforgiving and the quality of the field makes it a 12-hour sprint. As a result, you can’t afford to drive too far within yourself if you’re genuinely looking to win. I have to thank Rod for the opportunity and his great hospitality in Australia and I hope we can have a go at putting this result right in 2016.”

Lola Heritage division and Chevron look towards the future