Lee Holdsworth: “It's fun to drive this thing, it's a bit different to the V8. You can actually push pretty hard and each lap gives you more confidence."

Matt Griffin (Clearwater Racing Ferrari 458): “Yeah I know it is brilliant to be back. I mean this race and this track is just something else”.

“Yeah it is harder in the car this year and for an Irishman I'm not sure what I would prefer sliding around in the rain or burning up inside the car.

Last year was just really tough, it was probably one of the toughest races I have ever done. So yeah, I am hoping it will stay dry this year. I wouldn't mind the temperature dropping a few notches though”. 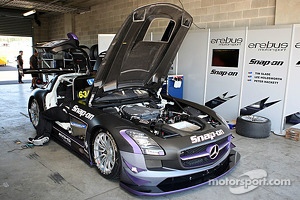 Craig Baird (Clearwater Racing Ferrari 458): “It's obviously fairly early in the week so there is still a long way to go. As Matt said it's a nice place to start, the car's reasonably good to drive.

It's just one of those things, I think the hardest part of the session was just trying to find a clear lap”.

“It's easier than being in the Porsche, I just turn the air conditioning on”.

Lee Holdsworth (Erebus Motorsport Mercedes Benz SLS AMG): “It's fun to drive this thing, it's a bit different to the V8. You can actually push pretty hard and each lap gives you more confidence.

Like Bairdo said the hardest part is finding a way through the traffic and getting a clear lap”.

“This thing is just amazing to drive, you start sliding and the traction control kicks in, so you just keep your foot into it. The brake and the throttle are like buttons, you're either on or your off”.

“I was following Bairdo there for a while and he wouldn't let me through, so you know I was probably five seconds or so a lap quicker than that!”

Tim Slade (Erebus Motorsport Mercedes Benz SLS AMG): “Last year was an amazing result for Erebus in their first attempt at the twelve hour and we've come back bigger and better and stronger.

Looking at the weather forcast we could potentially see some similar conditions to last year come sunday. Our car seems to be good in the wet and it is definitely better in the dry this year than it was last year”.

“It's great to be back in the SLS and going around the mountain, it's a great car to drive”.

“I guess there is a lot more competition this year, but I think it is purely going to come down to who keeps their nose clean come Sunday. Qualifying tomorrow, I think it is going to be luck of the draw as to who gets the clear lap.

Come Sunday we're all capable of running pretty quick around here in all the top cars”.

Peter Hackett (Erebus Motorsport Mercedes Benz SLS AMG): “We were just working on fuel knowledge, cruising around at 80% throttle making sure we got some good numbers out there. I think that will be really important when it comes to strategy on Sunday”.

Allan Simonsen (Maranello Motorsport Ferrari 458): “Obviously the team has had a full year of GT Racing, and we've learnt a lot more about the car.

I think we know a lot about the car, and also from the Ferrari side there are a lot of updates that have come to the car which hopefully will keep us going for twelve hours.

Looking at the other twenty four and twelve hour races that have been with the Ferrari 458 it's proven to be a very reliable car. So I think if we can continue with the speed we had last year, and a bit of luck, hopefully the race can be ours this year”.

“It's great to have Mika, he is a fellow Scandinavian, we fit the same seat and look good for the same girls and stuff! No, it's very good, he is a great guy.

Growing up I was watching formula one, and I am not sure if he likes me saying this, but I was just a kid when he was driving. I never thought I would be driving with Mika and I admire everything he has done.

Mika Salo (Maranello Motorsport Ferrari 458): “I've been watching a lot of YouTube videos from Allan and other guys and they just don't do any justice to this place - it's unreal when you see it in person.

The circuit is just something, I've never seen anything like it, it's probably one of the most difficult I've seen ever”.

“No there isn't any point that stands out, it's just the middle of nowhere. It's just the whole circuit is absolutely perfect, it's really good. It's nice, there's no single place that is any better than the other”.

“I am just learning something every lap and I've done only few laps so far. We had some problems early on and I lost a lot of laps. A 12 hour race in a GT car is not a long distance race, it's a sprint race.

You need to be on it from the beginning, I'm sure I am prepared. So if Allan takes care of the qualifying and I do a few more of the practice laps I think we'll be fine.

Like I said earlier, with Ferrari we won some twelve hour races by just a 0.1 second margin, so it is not a long distance race it's a sprint race”.

Peter Edwards (Maranello Motorsport Ferrari 458): “You just try and upset less and less people along the way and see how you go. It's more confidence ultimately.

I guess just every time in the car, being able to get on the pedal a bit earlier, deal with a little bit of wiggle here and there, it's just time in the car.

We do a lot of track days with Maranello as well, so getting time on different tracks to just casually take it out there and see what changes can be made.

JB has been a really great teacher, in terms of car setup, just giving me the confidence to push here and there”.

“It's fun, I guess my approach to all of this to have some fun with it all, get together with some great people, the whole team gets along together really well, and it sort of always has.

I guess the first thing we always look for is people that get along and gel together, have a laugh, and as long as we're still laughing at the end of Sunday it's alright”.