It was Holdsworth’s fastest ever lap around Mount Panorama and the first pole position for the AMG Customer Sports program at the spiritual home of Australian motorsport.

The regular driver of the Erebus Motorsport IRWIN Racing V8 Supercar came perilously close to the prescribed minimum lap time of 2:06.00. The team elected not to send the #63 machine out in this afternoon’s final 30 minute shootout. 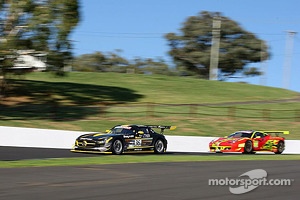 The car being piloted by the German outfit comprising Bernd Schneider, Thomas Jager and Alex Roloff ended the qualifying period in sixth overall placing. Schneider and Jager attempted to advance the yellow and black ‘Killer Bee’ gullwing up the grid, however the much-maligned traffic hampered Schneider’s quick lap on fresh MICHELIN rubber in the afternoon session.

Traffic was the talk of the day once again, with Schneider having some moments negotiating cars in the early session. With there being around 40 seconds between fastest and slowest cars, for the drivers to work their way around this will be crucial.

The run for the Erebus Motorsport SLS AMG GT3 team has been faultless thus far with an incredibly happy crew and drivers having started a solid 2013 campaign for the organisation in the best possible fashion.

Tonight will be a quiet night for the team with some final race strategy being planned. Tomorrow morning will be an early start for all and hopefully a successful day as the Gullwings fly on the Mountain!

Lee Holdsworth: “Fortunately, I was able to bank good time at the start of the first session this morning. It really took the pressure off all of us. Once we had that time down, it allowed us to sit watch the rest of them to try and get within that two-tenth buffer I established around the 2:06 barrier.

“The Erebus Motorsport SLS AMG GT3 is a quick car over a lap and we have a very good car for the race, it’s so much fun to be racing this SLS AMG GT3 in this event this weekend.

“The Bathurst 12 Hour is fantastic, it’s all very relaxed and enjoyable and sensational to be part of the Erebus Motorsport GT program and race with Tim and Peter, but also to be working with drivers the calibre of Bernd, Thomas and Alex.

“The time I did was a very strange feeling. I’ve never gone into the 2:06 barrier at Bathurst before. To do that and not be right on the edge as I would otherwise be was quite weird. This AMG Customer Sports Gullwing is an absolute dream to drive.”

Tim Slade: “It’s been a very relaxed day at the office for me, I’ve had about three coffees and its all pretty chilled!

“We were fortunate that Lee bedded the time down early, if anyone was going to beat it, they would have to push themselves very close to the limit, which one did and went over the limit and paid the price.

“The whole Erebus Motorsport team is comfortable and we all feel really good - we have some great pace right now. The car is awesome, this is a good fun weekend and we’re slowly building it up. Any time you can get laps at Bathurst, especially in this car, is great.”

Peter Hackett: “I had a great opportunity last year with the guys like Bernd, Thomas and of course Maro (Engel - Eebus Motorsport’s third V8 Supercar pilot) to learn from them and to get the most out of the AMG Customer Sports SLS GT3.

“Now to be here this weekend racing with true pros like Tim and Lee as part of this team is a great experience.

“The pace in our car is sublime, both our cars are very close right across the three drivers.

“Tomorrow, the motorsport community in Australia is in for a real treat. I think fans all over the place will be surprised at the capability of these cars in the morning - they are world class drivers, driving world class cars on this amazing circuit.

“Obviously we’re going to be doing as best we can and hopefully come out on top. It will be all about getting everything together for the final hour so I can hand over to Lee or Tim to bring it home.”

Bernd Schneider: “Today was another good day here, I was able to learn more of the circuit and am now very comfortable.

“Sixth placing isn’t a real indication of our speed, we had a lot of traffic throughout the qualifying which cost us some time. Lee did an amazing job in the other car and we tried to get up there with him, but were unable to get that clear lap.

“Our three drivers in this car are all very close in time, which is going to be the key for the race tomorrow. We are aiming to stay out of trouble and be towards the front for the final hour of the race.

“We are feeling very confident, our car is performing well, the team is excellent and I hope that we can bring a good result tomorrow for Erebus Motorsport and the AMG Customer Sports Program.”

Thomas Jager: "I think that third row is quite a good achievement, if we had several clear laps, we would have been closer to the front. For a 12 Hour race, the starting position is not too critical.

"We are good on the long runs and are set up well for the race.

"Of course we are very happy for the other car and that an SLS AMG GT3 is on the pole position.

"I think our driver pairing is very consistent and have to not make mistakes and pay a lot of attention whilst overtaking due to the speed difference between the front and back cars, you can lose a lot of time and its not worth risking too much.

"I’m quite confident, it will be a very exciting race - the team has done a great job, the drivers are all very close and the pitstops are all working very well. I think we are all very well prepared."

Alex Roloff: “The qualifying was very exciting and I think we have a good starting position. We have a great racing setup so I think it will be very good.

“It is an incredibly long race, we have a lot of time to settle into the race pace and we will see.

“The car and the team and my team-mates are all settled in well. Everything has run faultlessly with the team and the SLS AMG GT3 so all that is left to do now is for the race to start.”

Maranello Motorsport prepare to go for glory at Mount Panorama