Erebus steals pole from favourites on the mountain

It means back-to-back Bathurst poles for the Melbourne-based Mercedes squad but also dramatically usurped Allan’s old team the trophy named after him in the process.

Mika Salo had the bright red Ferrari on the top spot for much of the day, having set a stunning 2m03.8586s lap in the closing stages of the morning qualifying session. The lap would stand for more than five hours until a last-ditch flyer from a pumped up Engel saw the Mercedes Benz SLS AMG beat the Ferrari for pole by just 0.0835s in a dramatic conclusion to a dramatic day.

Engel set his time in the closing minutes of the dedicated 15-minute session for the outright cars only – and it turned out to be a thriller.

Flying New Zealander Shane van Gisbergen was the biggest improver during the shootout, his 2m04.0006s stunner good enough to secure the VIP Petfoods team a surprised third position, behind the Erebus and Maranello squads.

But then Engel’s flyer elevated the No. 1 Mercedes to the top spot, securing defending winner Bernd Schneider and newcomer Nico Bastian a Bathurst pole position in the process.

Just 0.1420s covered the top three in qualifying – 0.4s the top four – after a dramatic and bruising day on the Mountain. It ensures a diverse Mercedes, Ferrari and McLaren top three for tomorrow’ Liqui-Moly 12-hour race.

A last ditch effort from Will Davison hauled the second Erebus Mercedes – the 2013 pole sitting No. 63 car he shares with Greg Crick and Jack LeBrocq – to fourth position overall.

Godzilla’s factory return to the Mountain was done with almost the same devastating effectiveness as their last official visit 22 years ago, a 2m04.2563s flyer from Rick Kelly and strong performances from the other three drivers putting the Nissan GT-R Nismo GT3 into the top five.

David Russell lifted the JBS Lamborghini to sixth, despite his team missing the first session this morning entirely. 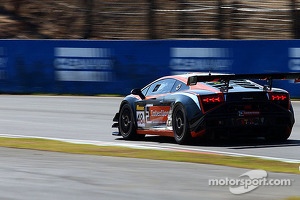 Having controversially elected to run their older-specification car in Class B on Thursday, the team was forced to change the car back to 2013 specification and run in the outright class today – taking two hours to change key aerodynamic and mechanical factors on the car to ensure its eligibility.

The hard work paid off with Russell’s flyer and the team looks in strong form.

With the Marc Cini / Michael Loccisano and Christopher Mies Audi R8 qualifying seventh, seven different brands will be represented in the top ten on the grid for the 6:15am start on Sunday morning. 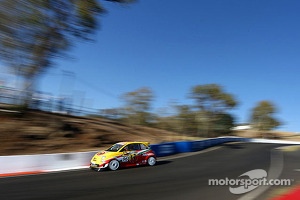 Despite a massive crash severely damaging their car, the Daytona Coupe’ trio of Jamie Augustine, Ben Schoots and Paul Freestone were still able to score the Class D Pole position – but face a long night to get their car on track for tomorrow.

The team plans to drive parts up from Melbourne overnight in an effort to make the 6:15am start.

Of the three FIAT Abarth 500s entered, the No. 59 entry headed by Paul Stokell topped the charts in Class F.

The day was not without drama, two leading contenders ruled out from taking part tomorrow.

The first was a hefty crash at the top of the Mountain from Jason Bright, who hit the wall hard in the Skwirk.com.au Audi R8 LMS Ultra in the opening qualifying session.

The car was too badly damaged to continue and has been withdrawn from the remainder of the event.

The 77 AF Corse’ Ferrari was also withdrawn from the meeting after a similarly hefty crash in the second session later in the day.

The Ferrari, driven by Steve Wyatt, crashed heavily at the entry to the cutting and was too badly damaged to continue for the remainder of the event.

The 2014 Liqui-Moly Bathurst 12 Hour starts at 6:15am (AEDST) Sunday, February 9, with the live streaming broadcast to commence at 6:00am local time.

The closing three hours of the race will be shown live on SBS from 3:30pm local time tomorrow.

Bathurst 12 Hour: Audis placed well during practice on day one

Bathurst 12 Hour: Class B 1-2 pole position and top ten places in Class A for the Audi teams