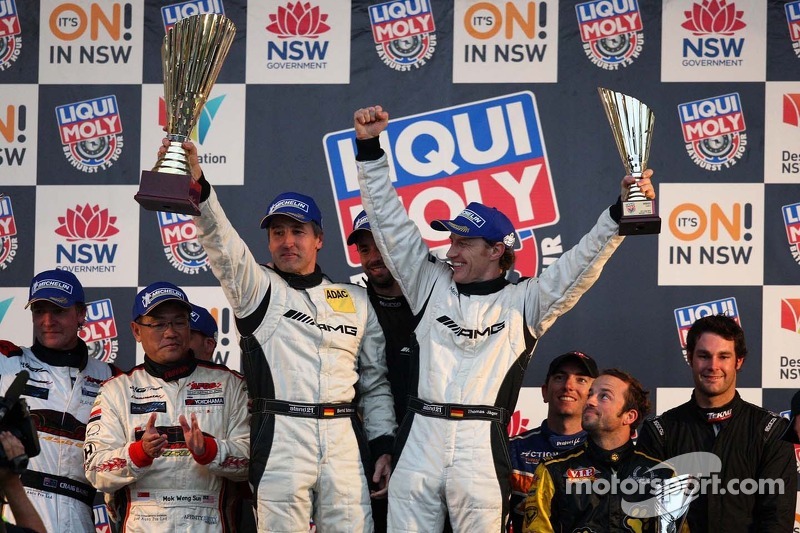 The pressure of the final stint was placed on the 32-year-old shoulders of Roloff. Not only did he have to survive a changeable track condition, the radio in the SLS AMG GT3 was not working. 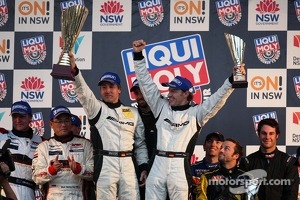 Although he was over one lap up on the next vehicle, Roloff had to survive a spirited charge from the car following him. In yet another Bathurst classic, the young German was not aware of what weather conditions he would face upon approach to the top of the Mountain.

The pair of Erebus Motorsport SLS AMG GT3’s were dominant from the start of proceedings this morning and ran in the top five for most of the day. With three hours remaining, they were the only two cars on the lead lap.

Soon after the nine hour mark of the once around the clock epic, a storm that had been brewing for much of the afternoon descended.

Within one lap, the top of the Mountain went from being slightly damp to absolutely drenched. With all drivers on slicks, they did a superb job to get around the Mountain to return to pitlane and fit new MICHELIN wet tyres.

With an inevitable safety car period happening, the pace was neutralised. On the restart, a chaotic traffic jam was created on the front straight with a mixture of speeds between the different classed cars. 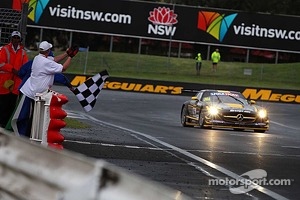 Unfortunately, Lee Holdsworth got caught up behind a significantly slower vehicle in the #63 machine. The collision resulted in an issue with the front right of the vehicle, forcing him back to the pit garage.

The never give up attitude instilled in the Erebus Motorsport team came to the fore with them working frantically to repair the damage and push Tim Slade back out on track. Given the potential of more rain, it was elected to get the car to circulate should trouble befall those in front.

In the meantime, Roloff’s sensational final hour was well underway, with Slade playing his ‘Gullwing man’ across the top of the Mountain.

The car was handed over to Peter Hackett for the final moments, with Erebus Motorsport’s foundation driver fittingly bringing the Purple and Black machine home in sixth placing five laps off the lead pace.

The duo of Erebus Motorsport drivers put on a phenomenal show throughout the 12 Hours, a middle stint keeping hearts in mouths as the pair circulated within a tenth of a second of one another.

The durability and performance of Erebus Motorsport’s technical partner, Michelin was displayed in superb fashion during the lunchtime stanza of the event.

Car #63 held onto its harder compound tyres for an outstanding 84 laps, the equivalent of half a Bathurst 1000 V8 Supercar event. The tyres survived despite a track temperature exceeding 60 degrees centigrade, the highest reading ever seen by Michelin’s highly experienced motorsport manager.

For Schneider it was his second victory of the season having last month won the Dubai 24 Hour race and keeps his 100 percent winning record with Erebus Motorsport alive.

Erebus is the Greek God of Darkness and was born from Chaos. The team’s spiritual God’s father was certainly looking down and playing his part today throughout the Liqui-Moly 12 Hours of Bathurst.

The victory is the first major international victory for Erebus Motorsport and with an exciting year ahead including its debut of an AMG Customer Sports E-Class in the V8 Supercars Championship at the end of this month. 2013 could not have got off to a better start for the Sydney-owned owned team.

Erebus Motorsport thanks and acknowledges the support of the AMG Customer Sports Program in Stuttgart as well as its technical partners, Snap-On Tools, Michelin, KOOGA and King’s Apparel, as well as it’s hard working crew and supporter base.

The Liqui-Moly Bathurst 12 Hour victory for 2013 is what the team hopes is one of many to come in the future.

Alex Roloff: “I had no radio for the last stint, it was pretty amazing given the weather conditions. I didn’t know at the time, but the Erebus Motorsport team were radioing to the other car to try and read the conditions so they could put a pit board out for me, this shows the spirit of this team and the AMG Customer Sports program.

“I had no pressure because I had my rain tyres on so I finished the race, there was no pressure.

“It was a tough race, but the performance of the AMG Customer Sports machine came to the fore once again and the car is undefeated this year.”

Thomas Jager: “When we arrived at Bathurst - all three of us are here for the first time. We had a look at the track and thought it would be really difficult. With Bernd and I having raced for Erebus Motorsport in the past, we had extreme confidence in the ability of the team to get the car on track and into a competitive position.

“Of course, we had great confidence in the SLS AMG GT3, particularly after the AMG Customer Sports victory in Dubai last month.

“Our team mates in the #63 machine are very experienced around Bathurst, so we really had to improve during practice, but finally we got better and better. During the race we found pace, but feel badly for the other car, they deserved it as well.

“On a personal level, it is my first 12 Hour race victory, so I am very happy, especially adding this to my FIA GT1 World Team Championship in the SLS AMG GT3 last year.

“For us its great, it has been a great weekend. It is a very exciting track, it is great to be here, once again, the SLS GT3 AMG proved to be very reliable. We didn't have one technical issue at all.”

Bernd Schneider: “This is really, really special for me, for all the guys and AMG Customer Sports.

“I have been racing for 40 years, it has been a long time since I have had to learn a new circuit - especially one like Bathurst.

“It’s such a difficult place. On Friday when we had our first runs out there, we could not learn the circuit because of the traffic. You couldn't learn the braking points if you always have cars in front of you.

We were struggling with that, but we were lucky we had Tim and Lee to see where we lost our time. We finally found a really good setup for the race, which was the main thing.

“When I jumped in the car for my first stint today I was really happy because the balance was very good and very consistent, I could push hard in the last three or four laps I did my quickest lap times. When the heavy rain hit, it was more like surfing down the hill!

“During the race there was much pressure, especially the last hour. We had a comfortable lead of two laps, but that can easily be eradicated - you have to be 100% sure of the track.

“We have achieved something really special, especially since its the first time for Erebus Motorsport and the first win for AMG Customer Sports at Bathurst - particularly after the recent dominance of another manufacturer at this event.”

Tim Slade: “It was a pleasing day in how the car performed. The Erebus Motorsport AMG Customer Sports machine was sensational all day. The team did a great job and we, as drivers, did exactly what we were asked to do.

“It is a credit to the team to be in such a position to last the distance. We could have easily had two cars on the podium.

“Its disappointing, but we go away, we try again and we come back next year. The entire team did such a great job, we have a big year ahead with everything that Erebus Motorsport is doing and we are very happy for Betty, Daniel and the entire team, along with our German friends.”

Lee Holdsworth: “We got so close. Getting to 11 hours, we were looking good. We were in the box seat and then got caught up in traffic. I’m really disappointed for the team. To step into this program has been so much fun, especially driving with Tim and Peter.

“The work of the team, the support from AMG Customer Sports is to a level I’ve never seen before and it is an honour to wear the Erebus Motorsport logo.

“I am absolutely amazed by the performance of the SLS AMG GT3 and the team. It is so different to what I am used to and what I’ve done in the past - it was just amazing and I really believe this will set Erebus Motorsport for a very solid 2013.”

Peter Hackett: “It has been an absolute treat to drive with Lee and Tim here this weekend. Having ended 2012 driving with Bernd, Maro and Thomas, the learning curve I’m on with this car and the team just continues.

“Today we had specific jobs and we all did them - went to plan right until the last hour, but at the end of the day, Erebus Motorsport - as a team - and AMG Customer Sports won. As a group, we are all so happy, I cannot express how happy we are.

“The goal was to go one step better than last year’s second placing, to end what had been a dominance here at Bathurst and we did it. The team was for the first time here a purely Australian operation with support and driving talent from Germany.

“We weren’t sure which car it was going to be, but the main thing was it was one of our SLS AMG GT3. Even better is it adds to Bernd and our friends from Black-Falcon’s win in Dubai last month. The AMG Customer Sports program is now undefeated for the year.”

Bathurst 12 Hour - Quotes from the winners