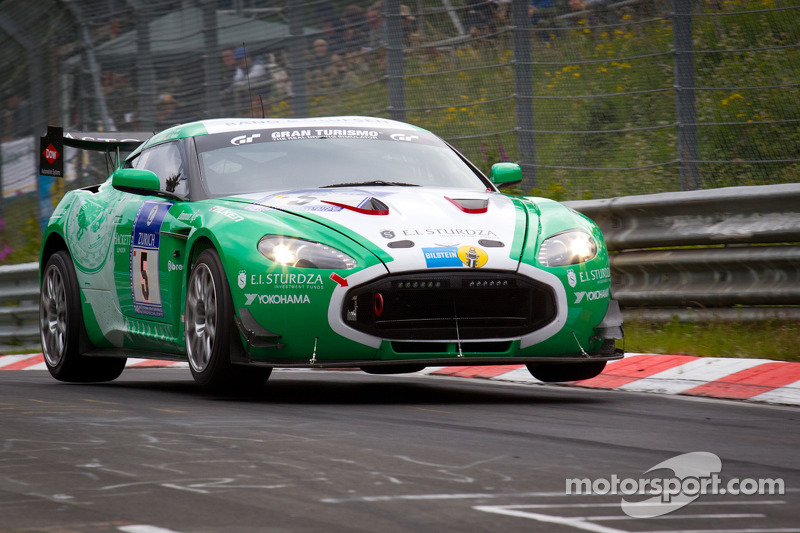 Aston Martin’s three factory-backed entries in the 39th ADAC Nürburgring 24 Hour race – including two new V12 Zagato concept cars – have overcome a series of challenges to all successfully complete the ultimate endurance test in Germany, observed by some 200,000 spectators.

As the chequered flag fell at 16.00 CET this afternoon, Aston Martin’s number 5 V12 Zagato took 5th place in the SP8 class with sister car, the number 3 V12 Zagato finishing 6th. In the SP10 class, a factory-backed V8 Vantage N24 raced to 5th place, but the final positions do not tell the full story of the typically incident-packed Nürburgring 24 Hour. 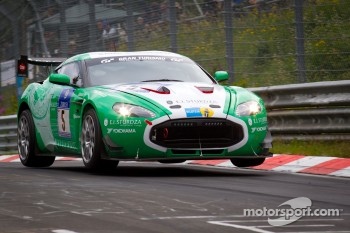 Aston Martin’s twin V12 Zagato entry marked the next step of an ambitious project which began when the car was premiered at the Concorso D’Eleganza at Villa D’Este in May this year, winning the Design award for Concepts and Prototypes. The show car was then transformed into the number 3 race car, nicknamed ‘Zag’ (red livery) while in parallel, a sister car – number 5, nicknamed ‘Zig’ (green livery) was built.

The intention to enter the new V12 Zagatos in this year’s race offered an extension of the company’s philosophy of signing-off new products by entering a car which is as close to the road car as possible and publically subjecting it to the toughest 24 hour test, by entering a car in prototype form.

Speaking after crossing the finish line in the red V12 Zagato, Aston Martin CEO, Dr. Ulrich Bez said: “All our cars finished today, and two out of the three customer teams also crossed the line. This includes two brand new cars which we launched only four weeks ago.

“With a little more luck we could have finished higher up the order, but finishing first wasn’t the goal, we aimed to have the cars running at the end – I am really pleased with the team who did such a great job keeping the cars running throughout.”

Of Aston Martin’s customer team entries, Team Pflanz managed a 7th place finish in SP10 GT4 while Bratke Motorsport finished 7th in SP8. Special thought is reserved for Mathol Racing who endured an agonising finish to the 24 hours having dominated SP10 GT4 remaining in first place for the vast majority of the race only to be forced to retire with little over one hour remaining.

Aston Martin’s Head of Motorsport, David King said: “We came here with two concept cars and the aim of finishing the 24 hours as the ultimate test for the V12 Zagato and we’ve achieved that. “I’m immensely proud of the team – as ever they have represented Aston Martin in the right way; staying calm under pressure, acting professionally and quickly solving problems when they arose.”

Despite extreme temperatures in the Nevada desert, the four-door Rapide has covered over 1,300 miles in the 24 hours endurance run, demonstrating the durability of the standard production sports car while raising money for charity. The drive, held concurrently with Aston Martin’s participation at the Nürburgring, saw a total of nine drivers from Aston Martin and Road & Track magazine complete nearly 500 laps.

Two 24 hour challenges on either side of The Atlantic were not the only Aston Martins in racing action this weekend as the 4th round of the Vantage GT4 Challenge took place at Donington. In a closely fought race which was only decided in the final closing laps, Stuart Hall in the number 91 Vantage GT4 crossed the line in 1st place after a thrilling battle. The Stratton Motor Company team with drivers Hall, Tiffany Chittenden and Chris Kemp qualified in 2nd on the grid in yesterday's session. Second to pass the chequered flag was Generation AMR with drivers Richard Abra and Mark Poole. Also clinching a podium was Vantage Racing with drivers Tom Black and Alan Bonner.

A full Donington race report will be published shortly. The fifth round of the GT4 Challenge will take place in two weeks at Spa Francorchamps on 8th and 9th July 2011.