Code 60 rule during incidents is safe and fair say drivers; Bernd Schneider uses Code 60 as a 'chance to recover' during the race.

For several years the Dunlop 24 Hours of Dubai has employed a Code 60 rule which is implemented during the race when an incident or accident takes place on circuit, and although relatively new and not yet universally adapted it is popular with drivers.

Code 60 rule, which was invented by Dutch National Racing Team (DNRT), replaces the traditional full course yellow system. Typically when an incident occurs during the race, yellow flags are deployed when an accident happens at a particular point on a circuit. If this is a big incident then a full course yellow is declared and a pace car is deployed. The field file in behind it until the circuit is deemed safe, whereupon the safety car peels into the pitlane and the race resumes. 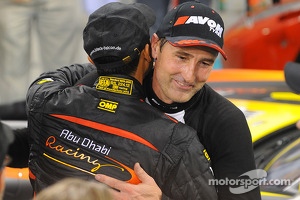 With Code 6, which is implemented with a designated flag deployed at the marshal points around the circuit, cars are then required to reduce their speed to 60 km/h maximum and circulate at this speed until the Code 60 is lifted and racing resumes. During the slow down period marshals can attend to the incident/accident safely without interrupting the race.

Speaking at the Team Abu Dhabi by Black Falcon press conference the team's Dutch driver said, "This is a great invention which we Dutch invented, and I am proud of that. It is great that they came up with this. I think it is very fair. Without the Code 60 you could be in the lead and suddenly everyone closes in on you when there is a safety car deployed. With Code 60 every second counts, it makes for very really pure racing. Everything you do in the race has to be good. I am happy with the system."

German touring car legend, Bernd Schneider who experienced the Code 60 rule for the first time last year, agreed with his teammate, "Last year was my first time here and the first time I experienced the Code 60. I had never heard about it before, but the system is very good. Pretty fair to everyone. Sometimes when you are behind a car doing less than 60 then you get a little nervous. Its very good for the marshals they can work even in areas where there is no accident without risking their lives."

"This year will be very interesting because the first five cannot enter the pits during the Code 60, this will be a good challenge. This allows you to catch up again even if you drop out of the top five. This makes it all very interesting for the crew to make good pitstops and the strategy to calculate where you are and to play the 'game' with Code 60. It's a very good system and safe for everyone," declared Schneider.

He added with a laugh, "Also when you get to my age it gives a chance to recover in the car during the Code 60."

The team's Emirati driver Khaled Al Qubaisi summed up the sentiment, "I agree with Jeroen and Bernd. Although I think maybe they should consider a minimum time for the Code 60. Last year we lost out almost two laps when there was a brief Code 60 period. But in principal it is fair."

Al Qubaisi, Schneider and Bleekemolen, along with Sweden’s Andreas Simonsen, will share a Mercedes AMG SLS GT3 run by Black Falcon, in Team Abu Dhabi colours, and are aiming to notch up their third Dunlop 24 Hours victory in a row in this the ninth edition of the race at Dubai Autodrome.

UAE drivers optimistic ahead of Dunlop 24 Hours of Dubai