Sonoma (USA), 24 September 2012 – With this one-two, Kuppens builds on his Trofeo Europa win and, with just one round left, now has one hand on the world title. Heading into the final round, in China in November, Kuppens sits on 168 points in the Overall standings. Next up is Fascicolo/Sernagiotto on 144 points and Simoni/Ragazzi on 138.

Race 2 was only decided over the closing laps when Sernagiotto tried to sneak past Kuppens. A clash was inevitable and it came on the hairpin leading into the start-finish straight. Sernagiotto emerged first but, to avoid being disqualified, he had to let his rival through, handing victory to Kuppens. Behind them came the American Johannes Van Overbeek ahead of Alan Simoni. 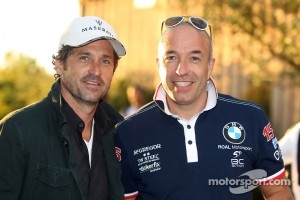 The endurance race, with its compulsory pit stop, saw Kuppens cruise to the finish line. He dominated and put 12.919 seconds between him and the Venezuelan Alex Popow, North American champion in the 2012 Le Mans Prototype Series. The last podium slot was taken by Swiss Team’s Andrea Dromedari and Max Pigoli, despite an untidy drive through the final curves and a clash with Ragazzi on the straight. The 50-minute event was held up when the safety car made an appearance, allowing Greg Tracy and Cedric Sbirrazzuoli’s cars to be removed after they crashed at turn one.

In all, twenty-three Maserati GranTurismo MC Trofeos appeared at Sonoma. The thirty-three drivers hailed from fourteen countries (Belgium, Switzerland, USA, Columbia, Morocco, Canada, Venezuela, Italy, Australia, Monaco, Sweden, Holland, Germany and Denmark). Among them was American actor Patrick Dempsey, a driver who was very popular with the fans over the entire weekend. Dempsey was in the No.33 Bowers & Wilkins car together with stuntman Greg Tracy. The two picked up an amazing sixth place (Dempsey in Race 1) and tenth (Tracy in Race 2). Tracy crashed out of the final event.

Renaud Kuppens said: “This was my weekend. It is just disappointing that I didn’t make it to the finish after puncturing in Saturday’s race. I really enjoy this circuit and think that I showed that I was faster than ever. On Saturday, I was really down but have made up for it with these two wins. Even the atmosphere at this American circuit is amazing. Now all that is missing is the world title but I don’t really make predictions and will be taking things a step at a time. There are two races to run in China so: may the best man win!”

Eurosport broadcasted highlights of the first two races in the US leg of the Maserati Trofeo during its ‘Motorsport Weekend’ programme (shown on Sunday evening). A 26-minute highlights show will be beamed on Eurosport 2 at 15.00 on Thursday 27th September.

The sixth and final round in the Maserati Trofeo MC World Series is scheduled for 4th November in Shanghai, China.

The complete classifications can be found at www.maseraticorse.com. The site also includes in-depth reports, driver interviews and images from the Maserati Trofeo MC World Series.

Top ten for Marc VDS at the Nürburgring