Champions! Nissan does the double at the Nurburgring

Nissan GT Academy Team RJN has won the Pro-Am Teams Championship in one of the world’s most closely contested GT3 competitions, the Blancpain Endurance Series. Lucas Ordonez has also been crowned as Pro-Am Driver’s Champion after a challenging time in today’s season finale, the Nurburgring 1000kms. 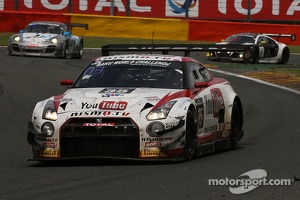 The Nissan vs. Ferrari battle never really began as the challenge from Ferrari fell away in the early stages of the race. Competing with two Nissan GT-R Nismo GT3s the Nissan team has raced across Europe - from Monza to Silverstone, to Ricard and Spa and finally the Nurburgring - taking victories and podium finishes along the way.

As the first ever winner of GT Academy, Lucas Ordonez already has some incredible career highlights, including two Le Mans podiums in 2011 and 2013. This is his first driver’s title and after a season that held a win at Silverstone, a podium at the Dubai 24 Hours and a hard fought podium at the Spa 24 Hours, the speedy Spaniard is on top of the world.

“This has been a tough day but despite the dramas we have come out on top,” said Lucas. “I’m so happy for Nissan, for GT Academy and for RJN Motorsport. It was a hard race and I really feel for Alex (Buncombe) as he did everything right today. Together we have made another big step and I look forward to continuing this adventure with Nissan. I’m so excited for everyone!”


Alex Buncombe takes fourth place in the driver’s championship and Peter Pyzera takes third. After some entertaining battles in the early stages of the race, which saw Al move up to eighth place overall, he beat a tactical retreat to remove himself from the Pro Cup race.

With a championship at stake the focus had to stay on the other Pro-Am runners. His fight ended though when the No.32 Nissan GT-R had to pit for a brake change. Despite running for over 12 hours at Spa on one set of brakes the Nurburgring turned out to be a brake-destroyer for many of the Blancpain teams.

“This is a very real achievement for our gamer-turned-racers,” said Darren Cox, Nissan’s Director of Global Motorsport. “The Blancpain Endurance Series is the toughest GT3 championship so to take the Pro-Am titles with gamers is testament to the work of not just the drivers, but the wider Nissan ‘family’. I feel very proud of each and every one of them.”

NASCAR Roundtable: Looking ahead in the playoffs and Silly Season 2018