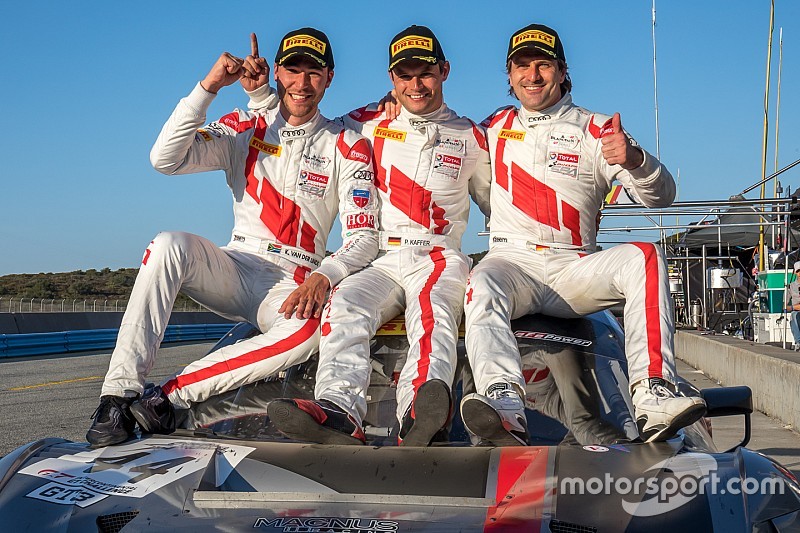 The third round of the Intercontinental GT Challenge was all about Audi R8s, and while Team Land dominated, it was Team Magnus Racing that had the pace in the final stint to clinch victory.

After seven hours of so-so action, the California 8 Hours exploded into life in the final 60mins when both Land Motorsport (Connor De Phillippi/Christopher Haase/Christopher Mies) and WRT (Robin Frijns/Stuart Leonard/Jake Dennis} made their final stops.

Rather than stay for the compulsory time for a full pitstop, both teams’ tacticians had figured out that it was faster to depart as soon as the drivers were swapped and the crew members finished their work and then serve a drive-through penalty.

WRT was done first, so Frijns emerged just ahead of Mies, but then served the pitlane drive-through penalty one lap before the Land car, during which Mies laid down a scorching lap so that when he stopped, he was able to feed back onto the track just ahead.

Given the pace that the Land car had shown all day, it looked like WRT had shot its bolt, but lapped traffic up ahead gave Frijns one more opportunity.

Exiting the Corkscrew, there was a GT4 Aston Martin up ahead and out of Rainey Curve. Mies eventually elected to pass on the left side of the track to give him the racing line for the right-hand Turn 10. Frijns took his chance and dived to the right of the Aston, and the two Audi R8s met at the apex.

The resultant collision sent them both off-track, and while Mies was able to drift through the sandtrap and rejoin, the WRT car was beached, needed rescuing, and lost two laps.

At the restart, Mies had the cushion of backmarkers between himself and the second-placed Magnus Audi R8 with Kelvin Van der Linde at the wheel. But the #44 – which van der Linde shared with Pierre Kaffer and Markus Winkelhock – kept growing larger in Mies’ mirrors, and the Land driver had to start taking the defensive slower line.

It wasn’t enough. Finally, with little more than 20mins to go, van der Linde swept round the outside of the leader at Turn 5, and gave himself just enough momentum up the hill to keep the Land car at bay.

Mies didn’t give up the chase but he had no answer for the Magnus machine which ran out the winner by 2.5sec after 314 laps of racing around the 2.238-mile Laguna Seca course.

They in turn were a lap ahead of the fifth-placed and leading Pro-Am car, the Black Swan Racing Porsche 911 GT3 R shared by Jeroen Bleekemolen, Tim Pappas and David Calvert-Jones.

Significant retirees included the second Acura NSX, which Peter Kox had to retire with cooling issues after just 21 laps, and the Porsche North America Wright Motorsports machine of Jorg Bergmeister, Pat Long and Romain Dumas, which retired 58 laps before the end with an engine issue.

Both Mazda 3 V8s finished in the Invitational class, 14 laps behind the final GT3 finisher and eight laps ahead of the top GT4 car.