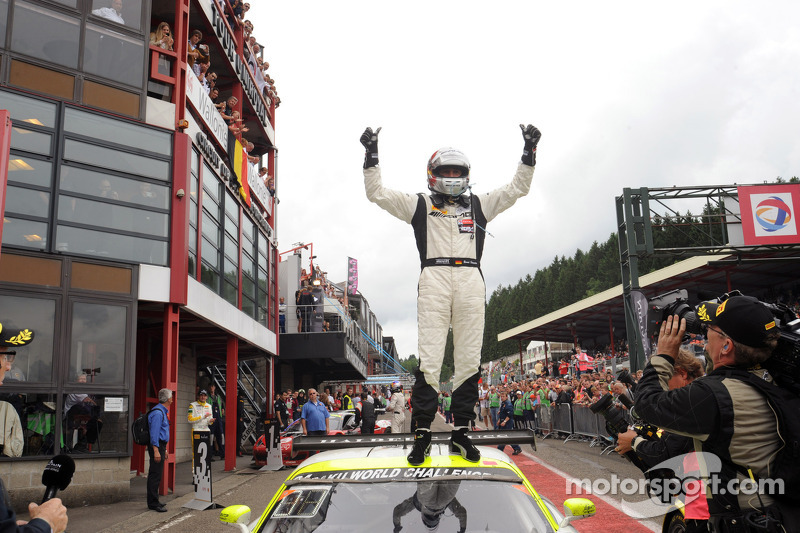 The 65th Total 24 Hours of Spa will be remembered for some superb racing and as a war of attrition between the biggest sportscar manufacturers in the world. The fourth round of the 2013 Blancpain Endurance Series at Spa-Francorchamps came to a scintillating conclusion this afternoon in front of a crowd of over 60,000 spectators, with Maximillian Buhk, Bernd Schneider and Maximillian Götz taking overall honours in their HTP Motorsport Mercedes AMG SLS GT3. Duncan Cameron, Matt Griffin, Alex Mortimer, and Toni Vilander took the Pro-Am class honours in the #59 AF Corse Ferrari after an epic fight with the #71 SMP Ferrari, while Jean-Luc Blanchemain, Jean-Luc Beaubelique, Patrice Goueslard and Fred Bouvy dominated the Gentlemen Trophy category with the #20 SOFREV ASP Ferrari 458 Italia, winning the 2013 Trophy in the process. The famous King’s Cup, the trophy for the best manufacturer, went to Ferrari and was presented by the RACB.

Shortly after the twelve-hour mark, when the rapid Marc VDS trio had retired, the race became a straight fight between the #150 Manthey Racing Porsche of Marc Lieb, Richard Lietz and Patrick Pilet and the German HTP Motorsport team's Mercedes SLS. The two teams were actually split by a gap of over two minutes, but differing pit strategies allowed them to at times race just inches apart. This gap grew due to a quicker brake change for the Mercedes, which made its stop for new pads and discs in the eleventh hour, while the Manthey crew serviced their brakes at the thirteen-hour mark.

For the majority of the race the two German cars were the only two cars on the lead lap, but a mistake by Manthey's Patrick Pilet, who overtook while behind a safety car, would prove extremely costly and resulted in a drive through penalty for the Porsche team. Given the speed and reliability of the #84 Mercedes, a two-lap margin was a near impossible deficit to recover from.

The victory was an important for one Schneider. It was the first victory in the Spa 24 Hours for the 1997 FIA GT Champion in 24 years. Back then the German was driving a Ford Sierra RS500, and the win today is his third 24-hour race victory this season, having already taken the top spot at the 24 Hours of Dubai and the 24 Hours of the Nürburgring.

In all, six different cars led the 2013 Total 24 Hours of Spa and between them there were 44 lead changes; over 30 cars retired from the starting 65, a truly tantalising statistic.

With 90 minutes remaining there was heartbreak for Vita4One Racing Team when the #26 BMW stuttered to a halt in the pit entrance and also for Kessel who retired from a third place; both cars were classified due to the distance covered, finishing tenth and ninth respectively.

It was a similar story in the Pro-Am class where it looked like a straight fight between Ferrari teams AF Corse and SMP Racing. The #59 Ferrari driven Matt Griffin and the identical #71 of Mika Salo became locked into a fascinating battle that will not be forgotten by those who witnessed it.

When the final pitstops were made, Salo passed the #71 SMP Ferrari to Maurizio Mediani and Toni Vilander took over from Griffin in the #59 machine. Finnish legend Vilander was the quicker of the two and AF Corse seized control of the race with less than 90 minutes remaining. The win was cemented when the Mediani was handed a stop and go penalty for exceeding the maximum time for a driver.

Taking a popular third-place finish was the first Nissan home, the #35 Nissan GT Academy Team RJN of Lucas Ordonez, Jann Mardenborough, Peter Pyzera, and local driver Wolfgang Reip. The GT-R's line-up is a motoring first, constructed entirely by GT Academy 'gamers', and the young crew were a revelation as the sun came up, leading the class before the throng of Ferraris overcame them. The result goes a little way to make up for the disappointment of losing the #32 Nissan after four laps.

Having led the Gentlemen Trophy category since the fifth hour the #20 SOFREV ASP Ferrari collected maximum points at the six and twelve hour intervals, the end result sees the French driver line-up become Champions of the popular Gentlemen category with a round to spare.

Having completed a near-faultless performance in the historic event, the #52 Sport Garage Ferrari and #111 Kessel Racing Ferrari ensured Ferrari made the Gentlemen Trophy an Italian job. A fourth 458 that of Beniamino Caccia, Jérôme Demay, Gilles Duqueine, and Philippe Marie completed top of the standings, shutting out the #58 Delahaye Racing and #48 ProSpeed Competition Porsche’s.

With one round to go there are just two points between Ramos/Rigon/Zampieri (50 pts) and Stippler/Mies/Buhk, with Marc VDS narrowly ahead of their Belgian Audi Club Team WRT rivals. Team RJN drivers dominate the points standings, Lucas Ordonez (61 pts) heads Peter Pyzera by four points, and the Nissan team need a solid finish to hold off AF Corse.

The series now heads to the Nürburgring in September (21/22) for the season finale, the Blancpain 1000.

Note:After the race, cars # 99 and 72 were found to have not reached the minimum driving time with their Bronze drivers and subsequently, the points were removed from the event.

Bernd Schneider, #84 HTP Motorsport Mercedes AMG SLS GT3 (Pro & Overall Winner)
“I won here in 1989 and it was a great race for me and my only win in two years then. I didn’t know I would have to do a 24-hour qualifying, we were pushing the whole night and the last two hours I could be more gentle, but there was no relenting. The Porsche had a better fuel consumption and their stops were shorter, so we had to push harder to beat them. Without the drive through for these guys we would’ve had to battle to the finish line; I would’ve liked that though!”

Marc Lieb, #150 Manthey Racing Porsche 997 GT3 R (2nd in Pro Class)
“We gave everything we had, we were fighting very hard on track, the guys in the pits did an amazing job, we had the fastest pit stops and everything was going in the right direction, but we were lacking a bit of speed on track which made it very hard. At the end we had some small issues with our engine, we were running on five cylinders at the end, so we couldn’t fight anymore. We can be proud with P2; everyone did a fantastic job.”

Andre Lotterer, #2 Belgian Audi Club Team WRT Audi R8 LMS ultra (3rd in Pro Class)
“I was very optimistic about the weekend. Everything we achieved today was due to merit, but we just didn’t have any performance. It was a tough race for our car, the drinks system didn’t work and we had no ventilation so I was driving with my hand out the window all the time to breathe a bit. We did a steady race, the team were great with the pit stops, and we pushed a lot harder to get more out of the car. We were pushing like hell which is the only way we could maintain speed, I pushed a bit too hard and spun, we lost fifteen seconds. It was a lot harder than Le Mans I can tell you that.”

Matt Griffin, #59 AF Corse Ferrari 458 Italia GT3 (1st in Pro-Am Class)
“We knew before that Total Spa 24 Hours is one of the toughest races in the world, but this year it was even harder. We did not do the best start to it as we were at the wrong place at the wrong time at the beginning with both Safety Car periods and I think we were around 49th position overall and two laps behind the leader in Pro-Am. When we saw we had a chance, we never gave up and every lap we did was a qualifying lap. In the morning we were back in contention and we just kept on going. The last four hours were intense with this big battle with the SMP Racing Ferrari and the pressure went down only after the penalty they had. We did not have an issue on the car, the car felt as good on the last lap as it did on the first. It’s not easy to have a car like that and to do such a race. It was hard work and we are over the moon.”

Patrice Goueslard, #20 SOFREV ASP Ferrari 458 Italia GT3 (Gentlemen Trophy Winner and Champion)
“It was difficult until the end, but we are very happy to win both this incredible race and the Gentlemen Trophy in the 2013 Blancpain Endurance Series. We had a team with a great atmosphere. With Fred Bouvy, we drove a lot at the beginning. The only trouble we had was a puncture and a clutch problem at the end. SOFREV ASP Team is really professional and to win such a race we need a strong staff and it’s the case in this team.”

Bernardo Serra, AF Corse (King’s Cup Winner)
“You can imagine that we are really happy to win the King Cup as with nine manufacturers at the start it’s never easy. This race was incredibly hard. We had to make the right decision at the right time, so on the pit wall it was a tough one. The consistency of our Ferrari 458 Italia was the key to win the race. With the AF Corse #59, winner of the PRO AM category, we did not have any trouble.”