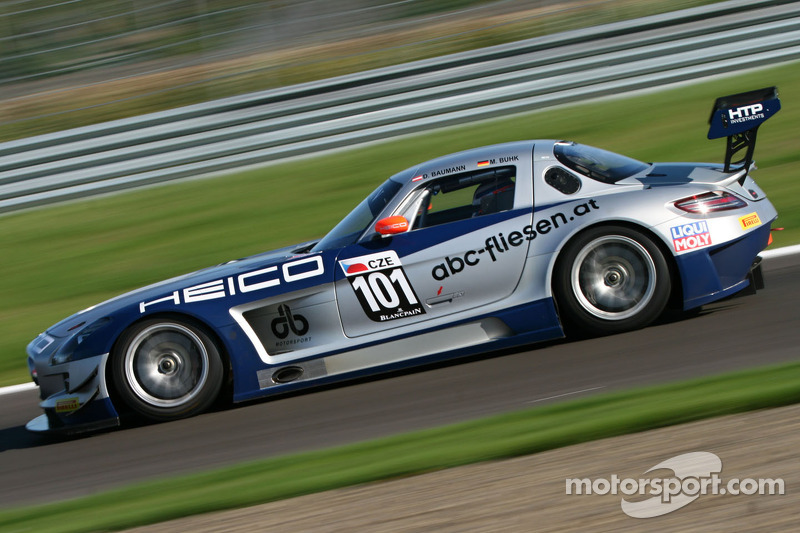 The FIA GT3 European Championship reaches its conclusion at Nürburgring from 21-23 September, with a championship double in sight for the Heico Gravity-Charouz Mercedes team. 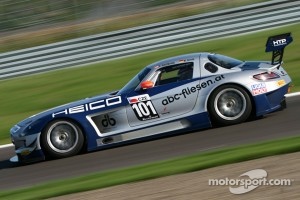 Dominik Baumann (AUT) and Maximilian Buhk (DEU) lead the drivers’ standings with 164 points after an impressive season highlighted by four race wins. They have a 36-point lead over the AF Corse pair of Michael Lyons (GBR) and Stefano Gai (ITA).

Although there are 50 points on offer at the Nürburgring, the Heico Gravity-Charouz duo would have to suffer a major lapse in form not to take the crown.

The teams’ battle is a two-horse race with AF Corse (295) holding a nine-point cushion over Heico Gravity-Charouz, the only two teams who can capture the title.

With both AF Corse cars proving the more consistent, Heico Gravity-Charouz will have their work cut out to deny the Italians.

Heico Gravity-Charouz team manager Brice Bosi is well aware of the technical challenges of the Nürburgring as the team seeks to secure both championships.

“The Nurburgring is a technically very demanding track, with slow and fast corners,” he says. “In particular, the new Mercedes Arena can cost a lot of time when you are off-line.”

As for the championship battles, Bosi says they will be earned by hard work this weekend. “It will be hard, but we worked the whole year to reach the goal. We want both titles.”

Bosi has fond memories of the circuit. “There are a few,” he says. “Of course the first win of a Mercedes SLS GT3 in the German ADAC GT Masters last year; it was also the first win for the ´new´ Heico Team.

“And then the memories of our 24 hour battle in 2012 where we had two cars in the top five until 15 minutes before the end of the race. Somehow we managed to get one car on the podium in the end. Anyway we have a lot of memories here on our home track and we are still looking for the next ones.”

Baumann is mindful that the notorious Nürburgring weather can affect car performance and ultimately race results on such a demanding circuit.

“The weather conditions and the temperature up and downs are typical for the Nurburgring,” he said.

“Its not easy to set the car up because there are a lot of slow and a lot of fast corners. To get the perfect balance between them is not easy. Our aim of course is to win the championship.”

His co-driver Buhk agrees. “We have a clear aim to fight for the win of the driver championship title. And of course we will try to win the team title also,” he said.

“I will do my best to be on top at the end. But for sure it will be a tough fight with the other guys and a lot of hard work.”

Lyons, meanwhile, sees the pursuit of the driver’s title as an immense challenge.

"The numbers are against us, but I think we still have a good chance,” he said. “The Ferraris performed well in Moscow and we were able to pull away. If we can get ahead of them (Baumann and Buhk) in Nürburgring, we'll be looking to repeat that.

"The cooler conditions in Moscow seemed to suit the car, and I expect that it will be similar at the Nürburgring. The only issue is that we'll be taking them on in their own back yard …”

As for the teams’ title, Lyons is more optimistic. "Throughout the season, both of AF Corse's cars have performed well and the results have been close. If both cars can get a good run in Germany, I expect that AF Corse will be in with a shout at the title,” he adds.

Rhino’s Leipert Motorsport has a good record at Nürburgring, having won numerous races on the German circuit.

Marcel Leipert said: “ Nürburgring is a fast track with two slow corners. You need a car which has a good top speed as well as high downforce for the fast corners.

“We want to win minimum one race in FIA GT3 this weekend to have a good chance for the championship fight.

“We still have theoretical chances to win the (drivers’) title, but after we missed the first round in Nogaro, it is hard to win in the title in such a strong championship having one event less than the other front runners. We will fight very hard for it to win at a minimum the vice-title.”

The Portuguese Team Novadriver pair of Ni Amorim and Cesar Campanico, winners of Race Two last time out in Russia, may yet have a say in the eventual destiny of the drivers’ championship.

Amorim and Campanico have been on an upward curve taking third (Navarra), second (Algarve), and a victory (Russia) in the last three events. They stand fifth on 114 points.

“We are heading to Nürburgring with confidence, after the good results that we achieved at Moscow,” Amorim said.

“On the other hand, our win in the second Russian race means a bigger handicap in the first race of the German event, so we will have to give our best to end it in a good position.

“We hope to get some good results, because we can reach the second place in the championship and we will try hard to get all the opportunities we may face to achieve that goal.”

The German round will be the second GT event in 2012 where the FIA GT3 European Championship and the FIA GT1 World Championship will line up on the same grid.

The action starts on Friday, 21 September with two Free Practice sessions. Qualifying is on Saturday morning at 09:55 with Race One on Saturday afternoon at 14:05 and Race Two at 12:45 on Sunday.

Marc VDS look to consolidate championship lead at the Nürburgring