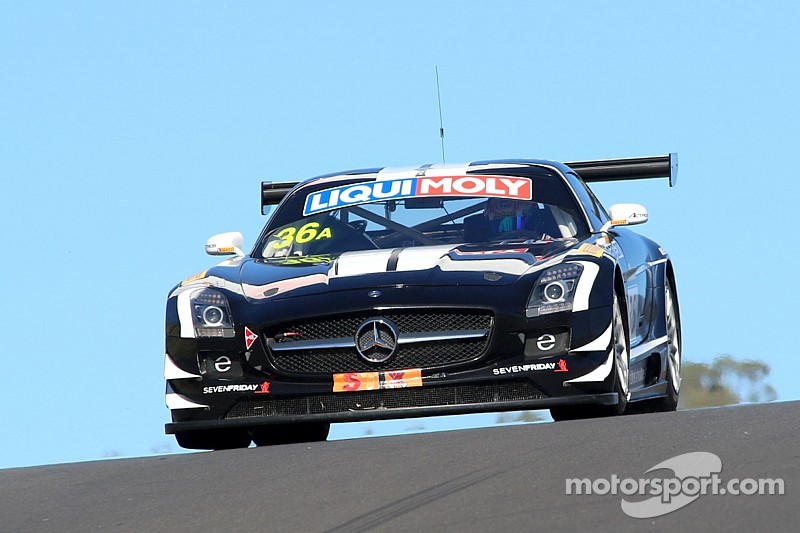 The 12 Hours of Bathurst has passed the six-hour mark.

The No. 36 Erebus Motorsport Mercedes may lead the race, but don't be decieved. Audi has dominated the majority of this race with the No. 15 Phoenix Racing entry, but the team dove down pit road in a proactive move as the caution flew, just a few minutes before the six-hour mark.

Markus Winkelhock handed over the blistering fast Audi to Laurens Vanthoor and as they played their strategy, the Erebus Merc took control of the field. The top seven runners remain on the lead lap with 134 laps completed.

We had four full-course cautions in the first three hours and another five in the most recent three. The fifth was simply for the No. 73 Ginetta coming to a stop, but the sixth was much more spectacular. With Peter Fitzgerald (winner of first ever Bathurst 12 Hours) behind the wheel, the No. 2 Audi got knocked off the circuit by a Bentley. Spinning out of control, many feared the car would flip, but that trepidation soon changed focus as the car flew back across the track and in front of another Audi. By the time it came to a stop, the car was undamaged in a very lucky situation.

Another Audi (No. 5) tagged the wall and stopped on track, bringing the safety car out for the seventh time, which was followed by another incident in the same corner, this time being the Class I leading No. 91 MARC Ford Focus. As cars paced around, the No. 29 Ferrari got slammed into from behind by a speeding Audi TT in a bizarre situation.

The most recent yellow flag was for the No. 18 Lamborghini, which limped to a stop on the circuit. It's been a tough race for the Bentley fleet. The team has endured multiple spins, offs, and each car has been penalized for an infraction involving either the pit lane or a restart.

There has been no change in the leaders of Class B and Class I with the No. 4 Grove Group Porsche still in control of the first and the No. 91 MARC Mazda 3 V8 the non-production class. The No. 76 Aston Martin leads Class C and the No. 23 Bruce Lynton BMW sits on top in the D Class.