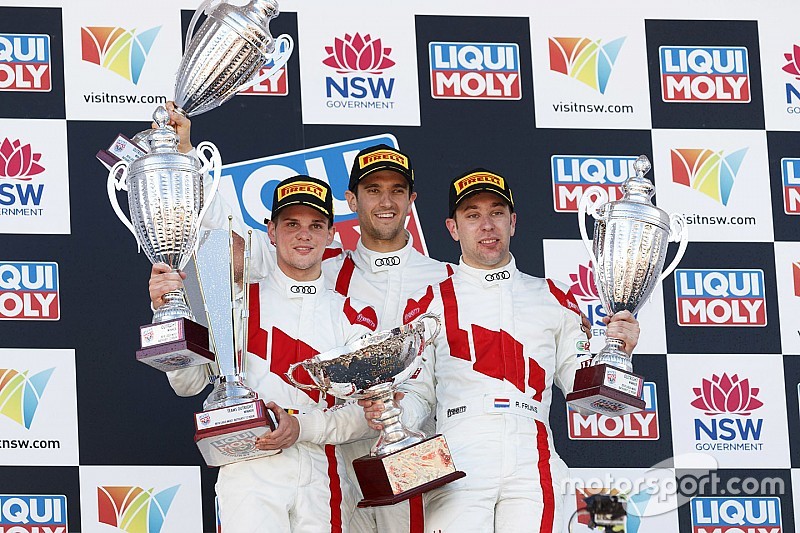 Robin Frijns, Stuart Leonard, and Dries Vanthoor are the 2018 Bathurst 12 Hour champions, after the race was declared early due to a massive final-stint crash.

Frijns led the field during a final hour economy test, building to a tense showdown with Jamie Whincup and Earl Bamber.

However a huge crash between Audi driver Ash Walsh and Mercedes driver John Martin with 20 minutes to go led to the race ultimately being suspended, the clock ticking down to zero as crews were parked on the front straight waiting for a restart.

As a result the #37 WRT Audi was declared the winner, ahead of the #75 SunEnergy1 Mercedes (Whincup/Tristan Vautier/Kenny Habul/Raffiele Marciello).

The first of the key moments of the final quarter of the race came just half an hour in, when the scrap for third turned into a melee at Forrest's Elbow.

It started when Chaz Mostert (#43 Schnitzer BMW) got into the back of Estre in the #991 Craft-Bamboo Porsche on the way out of the dipper. Then, as the pair tried to squeeze past a Class B Porsche on the run onto Conrod, more contact led to Mostert wiping out Kane in the #17 Bentley, who was a few metres down the road.

Estre managed to sneak through largely unscathed, diving straight into the pits to hand over to Earl Bamber. Kane and Mostert also got back to the garage, but were left well and truly out of contention for victory, while the #42 Class B Porsche was left hanging out of the wall.

With the crashed Porsche cleaned up, the race restarted with 2h20m to go. David Fumaneli led the field in the #55 Strakka Mercedes, but ran wide and immediately handed it over to Markus Winkelhock in the #74 Audi.

In keeping with the theme of the day, the green running was short-lived. The 14th Safety Car period quickly followed when the #777 Buik Lamborghini lost a wheel, Fumaneli pitting and handing second over to Frijns.

The race restarted with two hours left to run, the two Audis bolting as Whincup held on in the Mercedes.

But just as that was shaping up to be the main battle pack, the game changed again. This time it was heartbreak for the leading Audi, Winklehock left stranded on The Mountain due to a drivetrain issue with a little over 90 minutes to go.

His race was over, and the resulting Safety Car saw Frijns, Whincup, and Bamber head to pits with a stint and a bit to go.

Frederic Makowiecki took over the lead when the race restarted with 80 minutes left to run, but needing to pit again. The likes of Frijns, Whincup, and Bamber, however, were close to being able to run to the end.

With 45 minutes left, Makowiecki made that stop, leaving Frijns out front. Fifteen minutes later it was still Frijns leading Whincup and Bamber, with the race having boiled down to a test of economy.

The final twist in the tale came with 20 minutes to go. Having clashed with a backmarker, Ash Walsh was left stranded across the track on the run to McPhillamy. He was then hit at full-speed by John Martin who arrived unsighted, causing the 16th Safety Car period of the day.

The caution eased fuel concerns, but even cruising around behind Safety Car the leading crews were worried. The intrigue deepened with 11 minutes to go when the red flag was flown, drivers advised to pull up on the grid and teams told not to work on the cars.

While the cars stopped, the clock kept ticking. In the end it ran out before the race could be restarted.

Behind the top two, the #540 Black Swan Racing Porsche (Marc Lieb/Luca Stolz/Jeroen Bleekemolen/Tim Pappas) won the Pro-Am class with third outright. Like the #12 Competition Porsche behind it, an outright victory could have been on the table had the race run its course.

The #991 and #911 entries capped off a remarkable day for Porsche with fifth and sixth respectively.

Walsh's Audi was declared the winner of the Am class despite the nasty crash.

In terms of the classes, it was the #4 Grove Motorsport Porsche that triumphed in Class B. Despite a pair of spins and a drive-through penalty, the Ben Barker/Stephen Grove/Brenton Grove had almost three laps up its sleeve by the end.

The #91 MARC II completed a top-to-bottom domination of the Invitational class.

Crash lands Walsh back in hospital