Bathurst 12 Hour: Nissan in control at the half-way mark 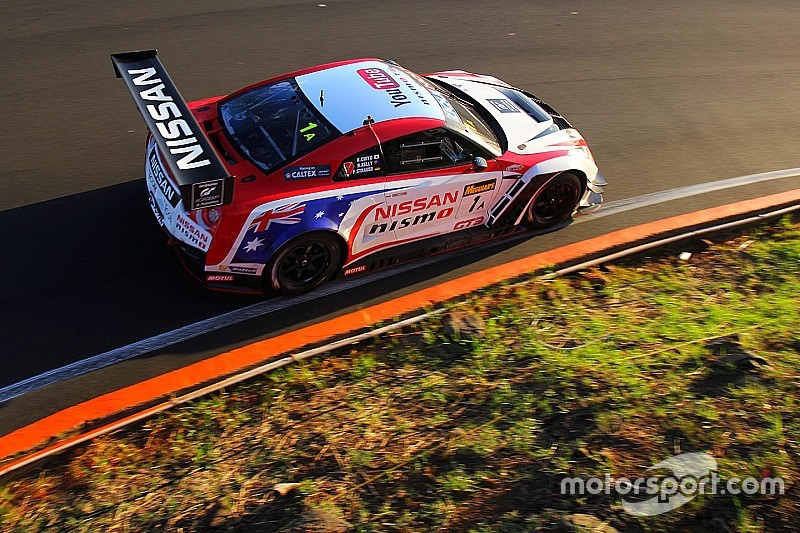 As half-time ticks over at the Bathurst 12 Hour, Katsumasa Chiyo and the Nissan GT-R are leading the way.

The second quarter of the race began with the #31 Bentley in the lead, before a round of stops saw the #36 Erebus Mercedes take over with David Reynolds behind the wheel.

But Reynolds' reign as the race leader didn’t last long; when he went to make his own stop during a safety car period seven and a half hours from the end, there was carnage.

First, he overshot his pit-box and had to be pushed back. Then, the team’s pit boom collapsed, meaning he had to head back out on worn tyres to avoid going a lap down.

That gave the lead to Chiyo, and put the #31 Bentley – now with David Russell behind the wheel – into second place. But it didn’t take long for Russell to have problems as well.

Running second right after a restart with a little under seven and a half hours to go, Russell nudged a Class B Porsche enough to puncture his right-rear tyre.

He managed to crawl back to the pits, and even looked as if he might stay on the lead lap thanks to Nissan deciding to pit the leading GT-R at the same time.

But the good news stopped there; as Russell returned to the track, it was clear bodywork was still rubbing on the tyre, a second puncture sending him straight back into the pits and more than a lap behind the lead.

Through all of the carnage, Chiyo kept it clean and now holds a 2.243s lead over the #59 Tekno McLaren of Jono Webb, which did have a scare of its own at the four-hour mark when it rolled to a stop on pit-straight and required a full reset.

Steven Kane is currently third in the #10 Bentley, despite having been at the back of the lead lap mid-way through the stint thanks to his own brush with the wall, while Nico Bastian is back up to fourth in the #36 Mercedes SLS.

The final car on the lead lap is the #37 Darrell Lea McLaren with Craig Baird behind the wheel.

The #4 Grove Porsche continues to comfortably lead Class B, with the #93 MARC Mazda 3 in front in Class I.

Bathurst 12 Hour: Bentley back in front with three hours to go