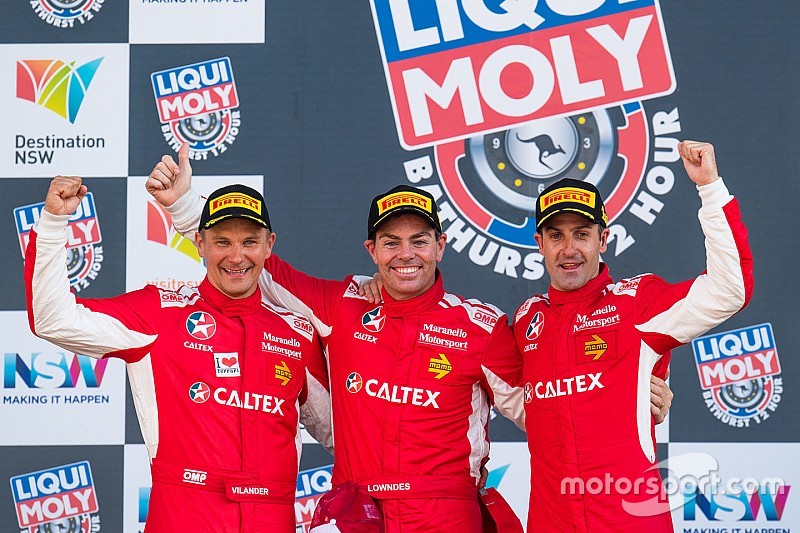 The #88 Maranello Ferrari has won the 2017 Bathurst 12 Hour, after Shane van Gisbergen spectacularly crashed out in the closing stages of the race.

Toni Vilander set up the win with a stunning stint three hours from the end, handing over to Jamie Whincup for the double-stint run to the flag with two hours and 13 minutes to go.

By then it was already advantage #88, but the #33 HTP Mercedes crew went for one last roll of the dice. With van Gisbergen having taken over from Maro Engel with a little under two hours to go, the team then opted to not change tyres at van Gisbergen’s last stop.

That move gave the #22 track position, but more than 40 minutes to go, and the Ferrari with a significant pace advantage, it didn’t take long for the #88 to retake the lead. It came with a breathtaking pass down Conrod Straight, the two Supercars teammates bashing doors as the Ferrari moved into the lead.

From there, things went from bad to worse for the Mercedes crew. Right on the half-hour mark van Gisbergen ran into the back of a lapped Porsche on the exit of The Chase, pitching it into the wall. There was a 10-minute Safety Car period, immediately after which van Gisbergen was slapped with a drive-through.

Not that it mattered. Before the HTP crew could even radio through van Gisbergen made a mistake in The Esses, slamming into the wall and taking himself, Engel, and Craig Baird out of the race.

The whole thing left Engel furious, the German launching into a an incredible rant on television.

“That’s not motorsport in my book,” said Engel. “I’ve got to watch out what I’m saying, but all I’ve seen this weekend is a lot of mistakes from Shane. It’s a tough one.”

Through all the drama, the #88 car came home more than a lap clear of the field.

“It’s been an amazing team effort,” said Whincup. “I guess we had beginners luck today. To stand on the top step is a fantastic feeling.”

The #12 Competition Motorsports Porsche came home second after Matt Campbell survived a late crash and subsequent penalty. The Supercup-bound Porsche junior driver took over from Marc Lieb with an hour and 18 minutes to go, the car fuelled to go to the end.

But any slim chances of victory disappeared around 10 minutes later when Campbell misjudged his braking marker into Turn 1, grazing the back of the #32 Lago Lamborghini. Not only did Campbell lose time after running down the escape road, but was then slapped with a drive-through for the contact with the seventh-placed Lambo.

That dropped the Porsche off the lead lap, Campbell, Lieb, Patrick Long, and David Calvert-Jones having to settle for second place and first in the Pro-Am class.

The #17 Bentley came home third after a quiet last portion of the race, Steven Kane double-stinting to finish 18s behind the Competition Porsche.

John Martin was next in the #912 Walkinshaw Porsche, taking out the Am class along with Liam Talbot and Davashen Padayachee, while the #1 Tekno McLaren (Alvaro Parente/Rob Bell/Come Ledogar) recovered from early mechanical dramas to finish fifth.

Class B honours went to the #21 Steve Richards Motorsport Porsche of Dean Grant, Dylan O’Keefe, and David Wall – who was a last-minute sub after Xavier West was ruled out with illness. The #21 entry finished two laps clear of the #50 Synep Porsche (Adam Cranston/Josh Cranston/Aaron Steer/James Winslow), after the resounding class favourite Grove entry crashed out early with Alex Imperatori at the wheel.

Russell Ingall ‘kicked in the guts’ by Bathurst crash