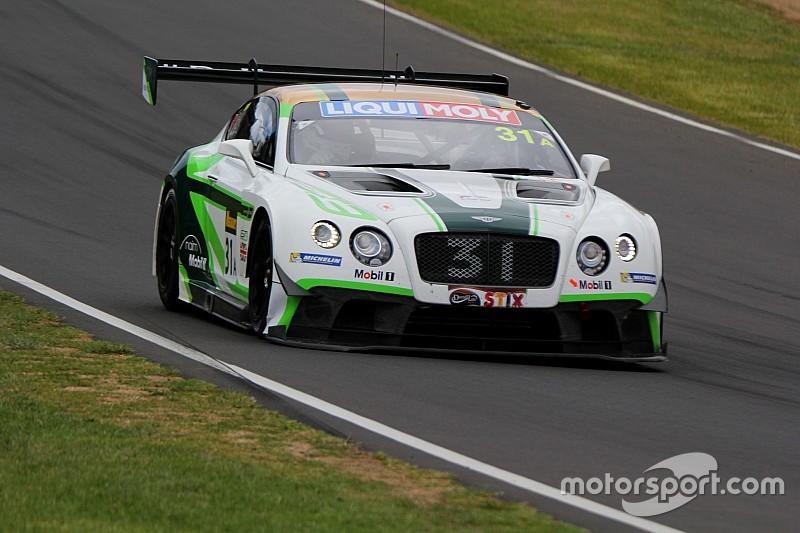 Andy Soucek and the #31 Bentley lead the Bathurst 12 Hour after three frantic hours of racing at Mount Panorama.

Soucek took over the lead of the race right on the three-hour mark, barging past the #1 Nissan GT-R, in the hands of Florian Strauss, which had been in front since the second round of pit-stops shook out.

Not that it’s been a straightforward morning for the #31; the car has already had to make an extra stop after suffering a puncture when David Russell and #60 Tekno McLaren driver Rob Bell got together while squabbling over fifth place after an early restart.

Strauss now sits second in a Bentley sandwich, Matthew Bell right behind him in the #10 Continental.

David Reynolds is currently fourth in the #36 Erebus Mercedes.

Despite concerns over how the Pirelli tyre would work in the cold morning air, pole-sitter Shane van Gisbergen had an untroubled run through the first part of the race. He comfortably led until the first set of stops, where the #11 Objective Racing McLaren briefly took over thanks to slightly faster work in the pits.

Van Gisbergen quickly rectified that, swiftly re-taking the lead from Warren Luff. He then comfortably continued to lead until the second round of stops after the two-hour mark, a green flag stop dropping new driver Alvaro Parente down to fifth.

Van Gisbergen will now sit out until the end of the day, then double-stint to the finish.

The #11, meanwhile, is already out of the race. After being right in the game for the first hour, Warren Luff made a small mistake at the esses and stopped at Forests Elbow, the race done for the McLaren.

“I just made a small little mistake and clipped the wall,” Luff said.

“It was only a small hit, but the damage put us out off the race. It was a mistake by me, I’ll put my hand up and take that one.”

For Audi, the first three hours of the race haven’t gone to plan. The #74 Jamec Pem car looked strong enough in the opening running, only for Marco Mapelli to tag the wall on the one-hour mark, damaging the R8 enough to end its race.

There were problems for the #75 Jamec Pem entry as well, light contact with another car leading to a puncture while Steve McLaughlin was at the wheel. Rene Rast is now in the car and running 16th.

One potential outright contender had its race effectively ruined on the very first lap; the #88 Ferrari found itself pointing the wrong way just two corners into the race after Mika Salo had a coming together with Nick Percat in the #62 LD Motorsport Lamborghini.

The subsequent damage forced both cars back to the pits, the Lamborghini indefinitely, while the Ferrari required a new rear assembly and didn’t reappear until the half-hour mark had already passed.

While the Ferrari crew was quick to point fingers towards Percat, the V8 Supercars star was adamant that there was enough room for both cars. “Everyone drove through two-by-two, so I’m not sure what Mika was thinking,” Percat said.

The #88 has subsequently retired from the race thanks to persistent problems with the suspension.

Earl Bamber currently leads Class B in the #4 Grove Porsche, while the #16 PROsport Performance Porsche heads Class I.

Nissan upbeat after qualifying for the 2016 Bathurst 12 Hour – video

Bathurst 12 Hour: Nissan in control at the half-way mark