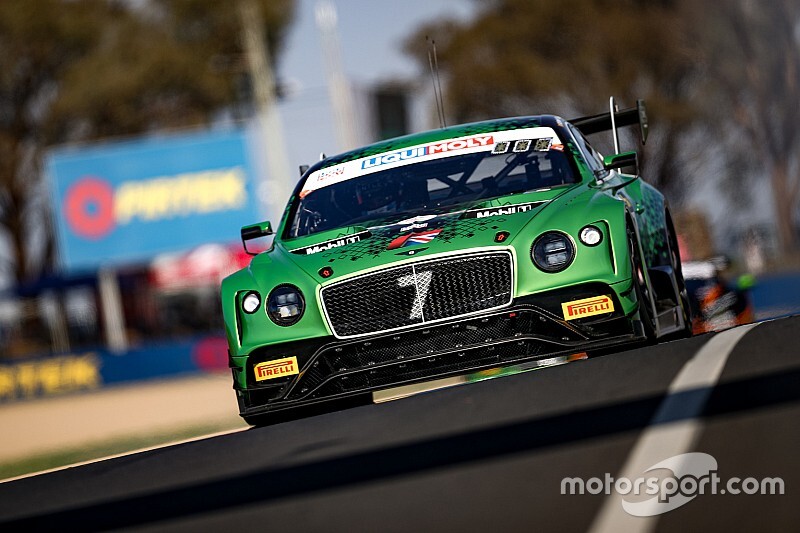 The #7 M-Sport Bentley leads the 2020 Bathurst 12 Hour at half race distance.

At the six-hour mark Maxime Soulet was at the front of the field in the Continental, after a see-sawing battle with the #999 GruppeM Mercedes as the pair run on different strategies.

The second quarter of the race kicked off with a Mercedes one-two, Felipe Fraga in the #999 entry leading Yelmer Buurman in the #77 car.

As the race approached the 3h30m mark Buurman made a third stop, handing second to Alvaro Parente in the #60 59Racing McLaren.

Second then became first when Fraga handed over to Rafaelle Marciello two laps later, Parente finding himself with a narrow lead over Jules Gounon in the #7 Bentley and Matt Campbell in the #911 Porsche.

At the same time Jamie Whincup was involved in a close call at the Grate, the #888 Mercedes driver tipping Marc Cini's Audi into a spin. Someone how the Audi stayed off the wall, both Whincup and Cini able to continue, along with Laurens Vanthoor who bounced over the kerbs avoiding the backwards R8.

Right on the four-hour mark both Parente and Gounon made stops (handing over to Tom Blomqvist and Jordan Pepper respectively), Vanthoor (replaced by Earl Bamber) and Whincup following suit over the next two laps.

That left Campbell briefly out front, before he too stopped to put Patrick Pilet back in the #911. Midway through the next stint the car hit trouble, however, a puncture sending Pilet a lap down.

It was the #7 Bentley that fared best through the stops, Pepper leading from an out-of-sequence Marciello. The Mercedes driver then took shortly after the 4.5-hour mark with a move at The Chase, only to hand it back six laps later with a scheduled stop.

The Italian rejoined in 11th, but also copped a 15s penalty on his next stop for a car controller breach.

When Pepper handed over to Soulet after five and a quarter hours Tom Blomqvist took over the lead in the McLaren, before he stopped to swap with Ben Barnicoat two laps later.

Soulet then resumed the lead – but did so with Marciello just a few tenths behind him. There was no way through for the Mercedes, however, which made its fifth stop – including penalty – 25 minutes later, Fraga returning to the seat.

The #77 Craft-Bamboo Mercedes then had a go at running down the leading Bentley, Maro Engel getting to within three-tenths before pitting right on the six-hour mark.

Barnicoat currently sits second in the McLaren with Shane van Gisbergen third in the #888 Mercedes.

The #34 Walkenhorst BMW, meanwhile, was dumped two laps down by a lengthy stop to fix damage caused by contact with a kangaroo early in Nicky Catsburg's first stint.